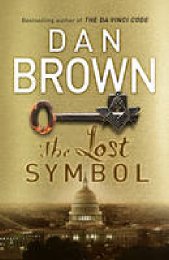 DVD
Steptoe and Son - The Lost US Pilot

Book
A is for Alibi
Related Articles

Article
Angels and Demons out in September
Recently Added Items

The latest book from the Dan Brown stable sees the return of symbologist Robert Langdon, but in a US domestic setting this time rather than jetting all over Europe. In the past Brown has remarkably managed to upset the Catholic Church with best seller The Da Vinci Code, which essentially rewrote the lineage of Christ, even though it was only a fictional novel. Here he decides to examine the Masonic movement, something that has always been shrouded in mystery.

Langdon is tricked into flying to Washington, supposedly to meet a friend of his, Peter Solomon, who just happens to be the head of the Masons. Arriving in Washington, Langdon quickly discovers the severed arm of his friend on display in a very public place, a discovery that sends him on a mission to discover the secret lost word of the Masons; a secret kept for centuries but supposedly hidden somewhere within Washington. Solomon's kidnapper, a well-built bald man covered in tatoo's and known as Mal'akh, has identified Langdon as the man most likely to be able to crack the old Masonic codes and find the 'lost word'.

Elsewhere Solomon's sister Katherine is squirreled away in a secret lab studying the science of Noetics, new kind of science that is looking at the most fundamental questions of human existence, such as proving the existence of the human soul. Katherine is in danger, though, as her brother's kidnapper wants to not only kill her but also destroy all evidence of her experiments in an attempt to harness all the secrets and power of the Masonic Order for himself. Langdon and Katherine Solomon must eventually team up in an attempt to not only preserve their lives but solve the mystery in front of them.

Dan Brown's latest novel is a bit of a departure from his previous novels in a way. It's true that Brown has a tendency to bog the viewer down in detail regarding either science or symbology, a bit too much actually, but The Lost Symbol doesn't quite fit the formula present in his previous books that made them a little predictable. Previously there was a twist about two thirds in whereby a character you thought was one of the good guys turns out to be bad, and this doesn't happen here (sorry, I know its a spoiler of sorts but as a valid criticism of Brown's writing style I thought it relevant to mark its absence). There is a twist near the end, but it's well telegraphed and is kind of an obvious one despite Brown's best intentions to muddy the waters slightly.

Brown's prose style is an easy one to read, and whilst he's been criticised in the past for this I find it's an easy style to both read and immerse yourself into, despite past criticism of this as turgid. I've found all of Brown's novels so far quite hard to put down as his writing makes his novels real page turners, and this is despite of the heavy detail. The use of Washington as the setting of his current novel is actually a good one and takes in some of the more spectacular landmarks of that city, making them out to be far more than they (probably) really are. My only real criticism is that the ending was too protracted and could've really been whittled down a bit.

Still, overall I really enjoyed this and quite frankly any novel or author that has the self-righteous Tony Robinson scurrying to Washington to debunk relevations in a fictional novel has my vote...