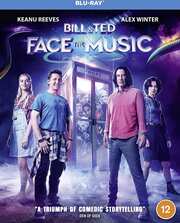 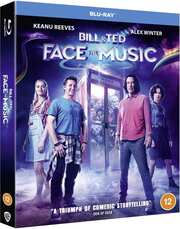 Of all the films that I was looking forward to watching in 2020, in the end only four made it to release. It must be said that my anticipation was somewhat tempered, with two films on my maybe list, and two films on my must see list. Yet in the end, it’s Tenet and it’s Wonder Woman 1984 that I’ve put on my ‘wait till it’s in a bargain bucket’ list, as the general response to both films has been somewhat tepid. It was Bad Boys 3 and Bill & Ted: Face the Music that got day 1 purchases. I wasn’t expecting much from either of them, and for much the same reason. Both films are ‘threequels’ and more meaningfully, return decades later to popular franchises, revisiting characters in middle age who we best knew in their primes. That way could have been a recipe for ill-conceived and poorly executed nostalgia, and I was understandably sceptical. But in the end, both of these films turned out to be pleasant surprises.

When last we saw Bill & Ted, Wyld Stallyns had just conquered the music world after defeating the pernicious plans of Denomolos, broadcasting to the globe and launching their rise to stardom. All that remained was for them to compose the song that would unite mankind and kick off an era of eternal peace and harmony. 25 years later, they are back in the basement, still trying to compose the song. Wyld Stallyns quickly broke up, and their star quickly waned. Left playing to audiences of decreasing sizes, by now, they have just a handful of fans, and that’s including their daughters Billie and Thea.

But time has finally run out. Not only is the deadline to unify humanity at hand, but the very fabric of time and space is starting to fall apart, having increasingly bizarre effects. Rufus’ daughter Kelly arrives from the future to warn them that they have just a few hours to compose the song. But rather than compose it, Bill and Ted decide to steal the song from their future selves, which turns out to be a bad idea. But then Thea and Billie decide to help their dads by putting together the ultimate band, and thanks to Kelly, they have a time machine too.

Bill & Ted: Face the Music gets a 2.40:1 widescreen 1080p transfer with DTS-HD MA 5.1 Surround English, DD 5.1 Surround Spanish, German and English Audio Descriptive, with subtitles in these languages too. It was certainly nostalgic seeing the old Orion logo. The image is clear and sharp, with great detail and rich colours. The special effects are up to date as you would expect, but CGI is relatively minimally used, mostly for scene extensions and time travelling, with this mostly a practical movie. The audio is excellent too, nice and immersive, and making great use of music, just as the original two films did. The dialogue is clear throughout, and fans of Dracula will be charmed by Keanu wheeling out his English accent once more.

You get one disc in a BD Amaray case, slipped inside an o-card slipcover. The disc boots to a static menu.

The big extra on this disc is The Official Bill & Ted Face The Music Panel at noC-cimoC[at]emoH which runs to 43:14. It’s one of those Covid safe Zoom affairs, with Kevin Smith interviewing the writers, the director and five of the stars of the film.

The rest of the extras amount to micro-featurettes, which serve as little more than trailers.
Be Excellent To Each Other (1:22)
A Most Triumphant Duo (1:17)
Social Piece (Excellence) (0:49)
Death’s Crib (1:13)

While the panel is good, it’s still a little disappointing a smattering of bonus features.

My first complaint with Bill & Ted Face the Music was that Bill and Ted’s Bogus Journey actually ended the story in the end credit montage; certainly there was enough there to assume that they had written the song and united the world in harmony. The opening of Face the Music begins with recapping that end credit sequence, but stops just as the headlines of Wyld Stallyns breaking up appears. It isn’t long before the film starts talking about alternate realities, and it plays its trump card. This sequel is set in a world where Wyld Stallyns didn’t reunite and play a concert on Mars. And with that, my complaints about Face the Music evaporate.

I have to say that I loved Face the Music; it’s everything I had hoped for from a Bill and Ted sequel and more. It’s a joyous, heart-warming delightful piece of entertainment, naive and hopeful in just the same way as the original films, with not a cynical bone in its body. It appeals to the optimistic hippy in me, the guy who still believes that music can save the world, although the idea that ‘God Gave Rock and Roll To You’ wasn’t the song is a disappointment.

It takes the characters in an interesting direction, middle aged, and living with their failure, yet defiantly still trying to find the song, although once they get unplugged from the wedding of Deacon to Missy (there are delightful touches with the earlier films) it’s clear that they’re getting tired of hitting their heads against a proverbial brick wall. They’re just about to give up, when Kelly shows up from the future with the final ultimatum, and so another adventure through time begins.

Their plan is to steal the song from their future selves, but given that those future incarnations actually unfold from who they are at this point, failing and tired, it’s no surprise that they open a can of worms that only gets worse the more they try. Against this arc, we have Bill and Ted’s daughters, Thea Preston and Billie Logan, who were introduced in Bogus Journey as Little Bill and Little Ted. They’ve been brought up on their parents’ time travelling adventures, and they idolise their fathers, and when they learn of the peril facing the world, they decide to help. They embody their fathers in terms of their physicality and their personalities, but they are smart and educated too, so their plan to put the ultimate band together is a lot more constructive than their fathers’ time travelling self-larceny.

Face the Music actually combines the best parts of the first two films. With the daft antics that Bill and Ted encounter trying to steal from themselves, it’s very much a Bogus Journey that they go on, but Thea and Billie’s plan to recruit the best musicians of the past, is more like collecting historical personages on an Excellent Adventure. But both journeys wind up intersecting, where one of the most beloved characters in the franchise returns.

Along with the next generation, and revisiting the previous films, Face the Music does more than enough to add something new and very satisfying to the story, really putting a perfect full stop to the franchise if this is the last we see of Bill and Ted. After all, the question remains, how can a song save the world? For everyone that loves a song, there will be ten people that couldn’t care less for it, and some who won’t stand for it. That’s human nature, we don’t all like the same things, and it justifies just why Bill and Ted had such a hard time finding the song. The film asks this question, and best of all, it answers it too, and in a way that is ultimately satisfying, and to me couldn’t feel more right. And if that isn’t enough, stick around after the end credits for a little more.

A recent film gets a flawless presentation on Blu-ray. The extras may not be up to much, but I love the film. Bill and Ted Face the Music is everything that I wanted it to be, and more. Station!