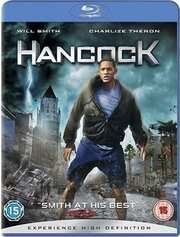 With the multiplexes saturated with comic book adaptations at the best of times, the proliferation of superhero fiction can get dispiriting, even for fans of the genre. It’s got to the point where you start looking for films which subvert the genre, just do something different that brings it back to life. Spandex and capes are all well and good, but once you’ve experience the clichés on a regular enough basis, you start looking forward to films like Deadpool, Logan, Mystery Men, Kick-Ass, Chronicle and Brightburn, films that blend in other genres, or just take an askew look at a pop-culture phenomenon. One such film that tends to get overlooked as it’s an original property, not based on a comic book is Hancock, which humanises its eponymous heroic figure to a degree that makes him a lot more relatable than in typical superhero fiction.

John Hancock is a bum. He’s a scruffy alcoholic who lays about most of the day, and he’s completely antisocial, with little time for anyone else. He’s also Los Angeles’s superhero, invulnerable, immensely powerful, and able to fly, and it’s still his ‘duty’ to keep the city safe from criminals and disasters. It’s just that his direct approach to fighting crime tends to leave more property damage in its wake than the monetary value of what he saves. As it is, most of the city’s population hate their saviour.

Not Ray Embry though. He’s almost as rare a specimen as Hancock, an ethical PR executive that wants to change the world for the better. He doesn’t get a lot of luck selling his pitches, but when Hancock saves his life, Ray devotes himself to rehabilitating Hancock in the public’s eye. He even invites him to meet his family, something his son Aaron is thrilled about. But strangely, Ray’s wife Mary is a lot more reluctant to get to know Hancock.

You get the theatrical version (92:13), and the unrated version (102:14). For the purposes of this review, I watched the longer cut. If Hancock were to be re-released today, I wonder if it would have a disclaimer for outdated attitudes the way the recent Bill and Ted 4k disc has.

Hancock gets a 2.40:1 widescreen 1080p transfer on this disc, and you have the choice between Dolby TrueHD 5.1 Surround English and German, Dolby Digital 5.1 Surround English audio descriptive, Russian and Ukrainian, with subtitles in English, German, Danish, Dutch, Estonian, Finnish, Greek, Hindi, Lithuanian, Norwegian, Swedish, and Turkish. Hancock is about the most orange and teal film I have ever seen; it seems often that these are the only two colours on screen, and may be why I avoided watching this film for so long. Other than that, the transfer is adequate, detail is good, and there’s no sign of compression or the like. I did experience a glitch at 29:10 on the disc, a small line of pixellation about two thirds the way up the screen, but hopefully it was limited to my copy. The surround does what it needs to, bringing the film’s action and music across, while keeping the dialogue clear.

I got two discs in a BD Amaray case, one on a centrally hinged panel. There is some nice inner sleeve art to look at, and the DVD disc holds the Digital Copy of the film, and has the code printed on the front. The digital copy will expire when your Windows PC and Playstation software are no longer compatible.

The Blu-ray disc has BD Live and DBox links, and the following extras.

There are trailers for The House Bunny, Lakeview Terrace, Nick and Norah’s Infinite Playlist, Men in Black, and a generic Sony Blu-ray trailer.

The On Set Visual Diary is a picture in picture thing, which has subtitles if you don’t want to faff around with secondary audio settings on your player.

The featurettes all look at aspects of the making of the film, from visual effects to action, sets to costumes.

Hancock comes at the genre from a really interesting place. What would a superhero that had nothing to fight for be like? As we learn in the film, Hancock’s attitude and demeanour stem from amnesia and a loss of identity, and the low self-esteem that resulted. Most superheroes wear costumes, try and be exemplars and symbols to the world in which they live and operate. Superman is a champion of justice, pure and innocent, Batman a dark vigilante striking fear into the hearts of criminals. Hancock has none of that. It seems that he does his saving the world thing as it seems the thing to do given his abilities, but he gets no thanks or appreciation for what he does, just approbation for his methods. It’s hardly worth getting out of bed for, and he rarely looks as if he does.

The commercialisation of superheroes had been looked at in an ironic way in Mystery Men, but Hancock gives it a straight interpretation, by making Ray Embry an idealistic boy scout of a PR man, probably the biggest leap that it will ask the audience to take. Once Hancock has saved his life, and he sees the reception that the superhero gets from the public, Ray makes it his mission to fix Hancock’s image, and there’s a lot of fun to see the hero in ‘rehab’. It’s down to a fundamental truth that despite Hancock’s antisocial behaviour, he does want to be liked, and seeing him struggling to control his more reactionary tendencies is charming. It’s reminiscent of when Robocop got reprogrammed in the sequel with a whole new set of directives to make him ‘friendlier’.

The plot of the film brings Hancock’s amnesia into play. He’s always had the thought that he was alone in the world, that there was no one else like him with powers, and that went some way to causing his sense of isolation. But it transpires that this isn’t so, and as he learns of the past that he has forgotten, that has unexpected ramifications for the characters.

Most superhero movies give larger than life personalities and motivations for their protagonists, which makes them iconic, and something to aspire to, or shy away from. Hancock on the other hand keeps its characters as wholly human, small, petty, emotional, and very simple to relate to. Hancock is a little stereotypically Hollywood in the way that it plays out; it can get a little schmaltzy at times, but in other respects, the anti-hero aspects of the main character also do much to downplay that schmaltz. The film looks awful, but that’s the orange and teal talking; of more concern is that glitch, but it’s a watchable disc in the ways that matter for the average viewer if not the cinephiles.