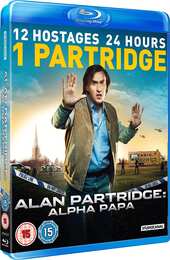 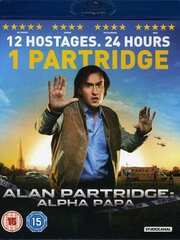 The Alan Partridge character has been around for almost 30 years. That doesn’t really bear thinking about, especially the fact that he doesn’t seem to age. He began life on radio way back in 1991, as do most comic creations in the UK, and quickly transferred to TV, where he keeps popping up irregularly to catch us up on his bizarre life. He’s a media personality, a man with no little ambition, but hardly any strength of character, overly pedantic, and with his foot permanently stuck in mouth, and a tendency to ask for a ‘Wogan’ every time he steps inside a barbers. And we’ve followed him on the climb up from local radio to national TV, and we’ve followed him down again, as he sabotaged his TV career, his family, and wound up back in local radio, trying to resurrect his career.

You can probably also tell from that description, blatantly cribbed from Wikipedia, that up until yesterday, I had never seen anything Alan Partridge related in my life. As a character he just didn’t appeal to me, while the cringe-worthy comic antics of the man weren’t compatible with my funny bone, or at least I thought. This raises the question as to why I’m suddenly jumping aboard the Alan Partridge train at this late date. I happened to catch the trailer for Alan Partridge: Alpha Papa on another Studiocanal disc some months ago, and it wasn’t Steve Coogan’s presence that sold me; it was actually the presence of Colm Meaney, better known to Trekkies as Chief O’Brien. He’s an actor I have a lot of time for, and to see him in a prominent role in a movie was something I didn’t want to miss. Hopefully this Alan Partridge character will be funny as well.

North Norfolk Digital radio has just been bought out, and is soon to become Shape, the modern face of multimedia broadcasting. Modern faces mean no room for the old, and late night D.J. Pat Farrell asks his close friend Alan Partridge to put in a good word with the new management. Alan goes in all guns blazing... and gets Pat fired.

Later, at the re-branding party welcoming the new management, Alan has reason to step outside for a minute, and in that minute, Pat walks into the studios with a shotgun, and takes everyone else hostage. Pretty soon, the police are there in force, placing the radio station under siege. But Pat will only negotiate through Alan. With this turning into a real time news event, Alan sees his chance to get back into the big time.

Alan Partridge: Alpha Papa gets a 2.35:1 widescreen 1080p transfer on this disc, and you have the choice between DTS-HD MA 5.1 Surround and PCM 2.0 Stereo English, with the disc defaulting to the stereo track. There is also a PCM 2.0 Stereo English audio descriptive track, and you get HOH subtitles. With this a recent film, there are no nits to pick with the transfer. The image is clear and sharp, detail levels are excellent, and there’s no issue with visible compression and the like. Scope may seem like overkill for the subject matter, but the widescreen format really pays dividends in the final act. The one issue might be the colour grading, which takes on a sepia tint that always feels obtrusive. The surround audio is excellent, designed well and really immersive, while the film has an eclectic, middle of the road soundtrack that suits the subject matter well. No better use of Roachford has ever been applied.

You get one disc in a BD Amaray. It autoplays trailers for I Give It A Year, The Look of Love, and Rush before booting to an animated menu.

The audio commentary for the film can be found in the setup menu, and it features Steve Coogan, along with his co-writers Neil Gibbons and Rob Gibbons.

Hectic Danger Days: The Making of Alpha Papa lasts 34:25 and is your usual bit behind the scenes with interviews with cast and crew.

Having now seen Alan Partridge: Alpha Papa, it makes me wish that I’d paid attention to the character back in the nineties when he was on TV. At least this means that I can confidently state that the film works perfectly well as a standalone, with little to no knowledge of the characters or the back story required. Alpha Papa was genuinely funny, with a great story and perfectly paced too, never easing off the humour, while really developing the characters in an emotionally effective way.

This is the kind of humour that I usually shy away from. It’s the comedy of awkwardness, the sphincter tightening sensation that you get from watching people, with the very best of intentions, putting their foot in it, and meticulously sabotaging their own lives. Alan Partridge is a master of that, always saying more than he needs to in any situation, then proceeding to dig himself a metaphorical grave. My problem with such characters usually is that while I might cringe at such antics, I rarely feel sympathy for them, and that is essential if you’re to invest in the character. Alan Partridge on the other hand is so detailed and nuanced, that you can see the self-loathing as he realises his latest faux pas.

The film is replete with such characters, although reading after the fact, they are characters established in the earlier TV series, and so have a rich history to work with. Of course Pat Farrell is a new character to the film, the easy-going Irish D.J. who host the graveyard shift on the station, and who is first in line for the chop when the new management take over. That Alan inadvertently swings the axe sets up the story for the rest of the film, as Pat just snaps, grabs a shotgun, and takes everyone in the radio station hostage. Against Coogan’s painful comedy, Colm Meaney quite rightly plays it straight, creating a sympathetic character that has enough of an edge to make him a realistic threat in the situation.

If you’ve read my reviews, you’ll know just how much I treasure a genuinely funny film comedy. They used to churn them out by the trailer-load once upon a time, but in recent years they’ve become like rare gems. Given how much I laughed at Alan Partridge: Alpha Papa, I suspect I’ll be revisiting this one quite often.