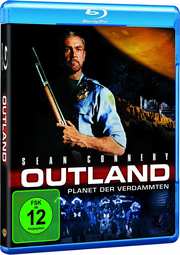 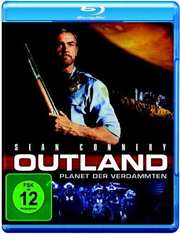 I can’t quite believe that it’s taken me nearly 40 years to get around to watching Outland. After all, it is a sci-fi movie set in space, and it was made in 1981, back when Hollywood was riding a wave of space opera success with films like Star Wars and Star Trek. Back then, if a movie was set in space, I would watch it. On the other hand, I still haven’t seen Dark Star, which is embarrassing as a sci-fi fan. In my defence I have to say that the early eighties were an embarrassment of riches when it came to my kind of cinema, and it shouldn’t come as a shock that some titles have slipped through the cracks over the years. Then again, when it comes down to it, Outland isn’t a sci-fi movie at all.

Jupiter’s moon Io is a rich source of Titanium, and it’s where the Con-Am company have established a mining facility populated by a few thousand miners and support staff. To police this rowdy bunch is a Marshall and a squad of deputies. Marshall O’Niel is just two weeks into the job, and he’s already having family problems when it comes to the isolated posting. Of more import is the fact that a second suicide has just occurred on his watch, men behaving completely irrationally in dangerous situations. He’s told that it’s just how things are in such a high stress environment, but when he investigates further, it turns out that suicides are far too common on this moon, and the company insists on shipping the bodies out quickly, no autopsy conducted. The more O’Niel investigates, the more he’s faced with just how alone he is out there.

Outland gets a pretty nice 2.40:1 widescreen 1080p transfer on this disc which looks as if Warners have put the film to disc without too much pesky post-processing, filtering or sharpening. It all looks as it should, with the occasional bit of wobble, or a speck of dirt on the print here or there. The colours are rich and consistent, there’s no problem with banding or visible compression, and contrast is great. It brings the sci-fi aesthetic of the film across well, some impressive model work, careful use of blue-screen and a nod to the blue collar world of Alien, with its claustrophobic and grimy mining station sharing a similar aesthetic.

The audio comes in DTS-HD MA 5.1 Surround English, which I assume is an upmix of the original stereo, as well as DD 2.0 Stereo Spanish, German, French, and Italian, with subtitles in these languages plus Dutch, Danish, Finnish, Norwegian, and Swedish. Jerry Goldsmith’s score is apt for the story, but I certainly noticed elements from other film scores such as Star Trek: The Motion Picture creeping in, the dialogue is clear throughout, while the upmix works well to immerse you in the film, accentuating the claustrophobic and isolating nature of the story.

I got the German release of the film, although the disc is the same worldwide. It’s presented in a thin BD Amaray eco-case (the one with the holes cut out of the plastic). It boots directly to a static menu.

On the disc you’ll find a pretty agreeable audio commentary from director Peter Hyams, and the theatrical trailer, which lasts 2:54 and is in 480i SD format.

It’s stated right at the head of the commentary... Peter Hyams wanted to make a Western. It’s just that in 1981, Hollywood was done making Westerns; it was no longer economically viable as a genre. Hyams’s solution was a nifty one, to set the film in space, turn it into ‘sci-fi’. It wasn’t even an original idea, as one year previously, Roger Corman had remade The Magnificent Seven as Battle Beyond the Stars. Spaceships instead of horses, lasers instead of pistols; a little cosmetic surgery was all it took to hoodwink the studios and still remake your dream Western, in this case High Noon.

There’s not a lot that Outland can do when it comes to the science-fiction descriptive, and what little it does, it gets wrong. By 1980 the Voyager probes had already looked at Io and discovered it to be the most volcanically active body in the solar system, but you see none of that here. This is also another Hollywood space movie that takes the ‘explosive’ bit of the term explosive decompression seriously, and the film has some imaginatively gruesome but impossible deaths. The preamble spells out that gravity on Io is only one-sixth of that on Earth, but apparently that’s true outside the station, not inside. Outland is definitely not a sci-fi, although when it comes to the film’s production and art design, it has a consistent and coherent view of the future that does work well.

It is a Western, a Marshall is sent to keep the law in a company mining town, and the first thing he does is run up against the corporate culture. It’s all about the bottom line, about being the most productive facility in the solar system, and that, according to the boss Sheppard, is best achieved by turning a blind eye to the occasional minor infraction. But with the spate of suicides, it becomes clear that company profits are being built on the lives of miners, and that illegal drugs are being used to increase worker efficiency, drugs with lethal side effects. The more O’Niel investigates, the more he realises that he’s fighting his employers, and that’s a fight with the odds seriously stacked against him. At best he can count on indifference, at worst, outright hostility, and when he pushes too far, the company pushes back, hard. They send professionals to deal with him, and it becomes a matter of waiting for the next shuttle to arrive, the ‘High Noon’ moment.

Sean Connery can carry a movie; his very presence makes it compelling, an easy film to watch, while the claustrophobic and tense setting of the film gives it an energy and feeling of suspense that really works well. Given some of the gruesome deaths, there’s almost an element of horror to the story. Also, the idea of one man, fighting ‘city hall’ has some appeal to it, a battle against monumental odds. The problem with Outland is the weakness of the antagonists. Of the villains, Peter Boyle as Sheppard is practically passive, saying much but doing little, while his minions are pretty much voiceless if not faceless. I had some hope when I saw Steven Berkov’s name in the credits, but he’s not an antagonist in the film, at least not a significant one. No Victor Maitland-esque machinations here. And when O’Niel has his showdown at the end of the film, it’s against another batch of disposable rent-a-villains.

Outland is a great example of the practice of taking a dead genre, sticking it in space, and calling it sci-fi. It’s an entertaining diversion, but doesn’t stand up as an exemplar of the genre, or all that outstanding a movie in its own right. Ten years down the line, Paul Verhoeven would evoke a similarly claustrophobic alien feel to much greater success with Total Recall, and you can definitely see the lineage between Outland and that film, not least in the Jerry Goldsmith soundtracks, and for that reason Outland is well worth spending some time on. The Blu-ray presentation isn’t spectacular, but it does present the film to good effect.