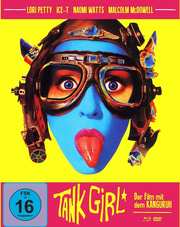 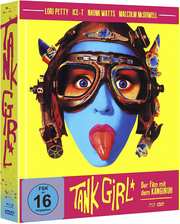 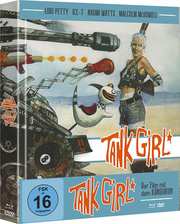 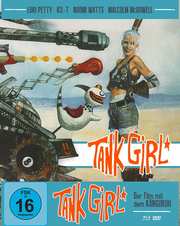 I got there eventually, I finally got caught up with Suicide Squad, the anti-superhero movie from the DC Universe that was nowhere near as good as Deadpool. The bright spot of that movie was the Harley Quinn character, Joker’s girlfriend and cute as a button psychopath. I liked her enough to think about eventually watching the Birds of Prey movie, and even give the Suicide Squad sequel a chance, now that Guardians of the Galaxy director James Gunn is at the helm. But Suicide Squad’s Harley Quinn did feel a little insipid nevertheless, all malevolent glam and no real bite. I made the comparison to Tank Girl, noting that the 1995 comic book movie did female empowered anti-heroes a lot better.

That got me looking for the film on Blu-ray, and this year I found that 7 years after Shout Factory released it in the US, we finally got a Region B version. It’s from Germany though. I think they must have really bad broadband in Germany, or they just love their films more, as when it comes to Hollywood films, they not only have a wider range than any other Region B territory, but older discs remain in stock for longer as well. The only thing you have to look out for is player forced German subtitles. I eagerly placed an order for Tank Girl, conveniently forgetting that for all its talking points, it’s not a great movie.

Koch Films have released Tank Girl in Germany in Mediabook format with the choice of two covers.

It’s the year 2033, a comet has struck and wiped out much of the planet, and water is a scarce commodity. Rebecca and her commune eke out a living in the arid wastes by illicitly siphoning off water, but the Water and Power Company want to hold onto their monopoly. In an attack, Rebecca’s home is destroyed, loved ones murdered and she is taken prisoner.

Water and Power’s CEO, Kesslee thinks a woman with Rebecca’s lethal skill would be a good recruit, but he has to break her spirit first. When torture doesn’t work, he decides to use her as bait for the Rippers, mysterious and bestial warriors that raid Water and Power. That plan backfires brutally, but it does mean that Rebecca is free to seek revenge. It doesn’t hurt that she’s come into possession of one of Water and Power’s tanks.

Tank Girl gets a 2.40:1 widescreen 1080p transfer on the disc, with the choice between DTS-HD MA 5.1 Surround English and German, with English and German subtitles. The image is stable, but its looks, thankfully that there has been little done to ‘spruce’ the film up for modern HD sensibilities. The grain is still there, there is a bit of filmic flicker, and there is even the odd bit of dust and dirt on the print. It’s a little duller than I was expecting, but detail levels are excellent, and skin tones are natural. The Rippers really look great in high definition. Stan Winston’s make-up and prosthetic appliances are really seamless and lifelike. The action comes across well, enhanced by the comic book visual interludes, and this being a pre-CG film, you’ll have to be prepared to forgive the odd wire showing, some obvious looking models and blue screen. The dialogue is delightfully clear throughout, while the action comes across well, immersing you in the film. This film also has the kind of eclectic soundtrack that has you looking for a CD to buy, or a download to... well, download.

You get 2 discs in a hardback book. It looks like a book from the outside, but on the inside there are two digipack panels on the inner covers, one holding the Blu-ray, and one holding a PAL version of the film on DVD. Between the covers are 20 pages of booklet, which offer 4 pages of German text in an essay, and the rest devoted to stills.

The Blu-ray boots to a static-ish menu.

On the disc you’ll find a very useful audio commentary from director Rachel Talalay, and star Lori Petty, which goes into the issues during production which left the film in a state removed from the original vision.

This looks to be the Shout Factory disc reworked for the German market, and while the audio commentary is in English with no subtitles, the video extras will play with German subtitles enabled by default, although you can turn them off.

To hear the studios talk, it seems that the advent of female comic book characters carrying movies is just a modern thing; that movies like Captain Marvel and Wonder Woman are just recent developments. The fact of the matter is that female led comic books have been adapted to film right from the beginning, maybe even earlier than you’d think. Films like Barbarella and Modesty Blaise date from way back in the sixties, there were films like Supergirl and in 1995, this Tank Girl adaptation came along. The less said about Catwoman the better, but you’ll note one thing in common. These films never really set the world on fire. In a patriarchal film industry, it’s a rare film that has a female protagonist, even now. You need creators with enough clout to do their own thing without studio interference, and it’s the directors like James Cameron, Katherine Bigelow, and Luc Besson who give us memorable female lead characters in action films, not the studios.

The studios like to stick their oar in and wreck such films, as you’ll learn if you listen to the commentary on this disc, and watch the extras. This isn’t the Tank Girl that we were supposed to get, and it does tell in the final product. Tank Girl is a disjointed, chaotic mess of a film, with questionable continuity and an uneven tone. Having said all of that, Tank Girl is still a visual feast, an energetic, post apocalyptic romp with oodles of chutzpah. It’s one of the earlier film representations of female empowerment, with a positive, quirky and non-conforming main character. It’s no wonder that over the last 25 years, Tank Girl has transformed from a forgettable flop in a year of flops (it was also the year of Stallone’s Judge Dredd) to a veritable cult classic. That it has received this lavish presentation from Koch Films indicates that this is more than just that film with the kangaroos, although that is stated on the blurb with the case.

Tank Girl has pace, it has energy, and it has memorable characters. I don’t think I will ever get over the idea of Ice-T as a kangaroo, while Malcolm McDowell really gets his teeth into Kesslee in a way that he failed to do with Soran in the previous year’s Star Trek Generations movie. For good or ill, Tank Girl is a comic book made three dimensional, and some of its more bizarre diversions (the Cole Porter number) can be forgiven given what it tried to achieve.

Tank Girl isn’t really a good movie, but it’s the kind of bad movie that I will choose to watch over and over again. This Blu-ray presentation from Koch Films ticks all the right boxes when it comes to audio and visual quality, while the extras package is lavish and useful. The Mediabook concept is about as daft a packaging solution as I have seen, but it matches up to a film as daft as Tank Girl.