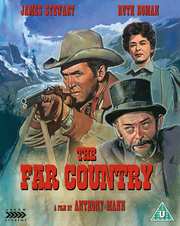 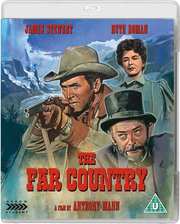 Synopsis:
An archetypal example of its genre, The Far Country is one of five superb westerns the screen legend James Stewart (Vertigo, Bend Of The River) made with acclaimed Hollywood auteur Anthony Mann (El Cid, The Man from Laramie).

Mann s film tells of Jeff Webster (Stewart) and his sidekick Ben Tatum (Walter Brennen, My Darling Clementine), two stoic adventurers driving cattle to market from Wyoming to Canada who come to logger heads with a corrupt judge (John McIntire, Psycho) and his henchmen. Ruth Romain (Strangers on a Train) plays a sultry saloon keeper who falls for Stewart, teaming up with him to take on the errant lawman.

An epic saga set during the heady times of the Klondike Gold Rush, The Far Country captures the scenic grandeur of northern Canada s icy glaciers and snow-swept mountains in vivid Technicolor. Mann s direction expertly steers the film to an unorthodox, yet thrilling all guns-blazing finale, whilst the imposing landscape takes on a whole new splendour in High Definition.