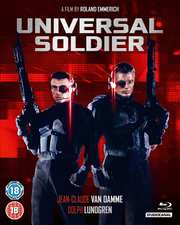 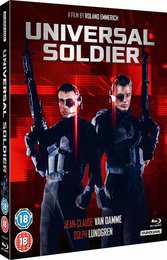 DVD
Universal Soldier: The Return (US)

I was bit pretentious in my late twenties. I deliberately bought a copy of Universal Soldier on DVD and proceeded to deride it as a cheesy action movie, writing a negative review that was nothing more than a back-handed compliment. Well, I’m older and more honest with myself. Yes, Universal Soldier is a cheesy action flick, but I like cheesy action flicks, and I love Universal Soldier. I’d like to go back in time and give a quick slap to that self-important twenty-something year old, trying to impress his equally snobby mates in the pub (I think I’ll watch Timecop next). Universal Soldier is a great action film, one of the best of the nineties, and after Stargate, it’s my second favourite Devlin Emmerich collaboration. It’s also an action movie with real action, instead of the CGI nonsense that passes for action in most modern films.

I’ve long wanted to upgrade that creaky old DVD to Blu-ray, but it’s only now that I’ve been motivated to do so, although Universal Soldier has been out in High Definition for quite some time. It’s just that the original 2009 Blu-ray release wasn’t well received, with poor quality video and a lack of extras cited by some purchasers. Just like with 3D BD, a format that I’m unlikely to ever use has come to my rescue. Ultra High Definition discs are now a thing, presenting films in 4k resolution, and there is a big call for back catalogue titles to be revisited, restored and scanned at the higher resolution. That means that there are new transfers around, from which new Blu-rays can also be struck, which will look a whole lot better than the original discs. That’s how Blu-ray owners can still benefit from Ultra High Definition, and Studiocanal have really taken to this new approach in the last couple of years, notably last year with films like Cliffhanger and Rambo. This autumn, they’ve given us three 4k titles, and with them come three Blu-ray upgrades, Red Heat, Leon, and this, Universal Soldier.

In 1969, Sergeant Andrew Scott and Private Luc Devereaux died in a mission that fell apart in a Vietnamese village, when Scott suffered from a psychotic break. Now, years later, the Universal Soldiers are making headlines as they complete seemingly impossible missions; a hostage crisis at a dam is case in point. These Unisols are strong, fast, resilient, perfectly obedient, and seemingly invulnerable. That’s the kind of story that reporter Veronica Roberts can’t let go, but this secret military project can’t suffer any kind of scrutiny. When Roberts gets too close, she has to be restrained. But one of the Unisols, GR13 exceeds his orders. This triggers a flash of memory in another unit, GR44, and he takes Roberts and flees, determined to follow a half remembered imperative to keep her safe.

Universal Soldier gets a 2.35:1 widescreen 1080p presentation. The film looks fantastic, clear and sharp, with strong consistent colours, and excellent detail. Film grain is light, skin tones are natural, and the general experience is very filmic, just as it should be. The image is stable throughout, there’s no sign of print damage, and the only dirt I saw was something caught in the shutter around the 44 minute mark. Universal Soldier looked even better than when I saw it in the cinema almost thirty years ago.

You have the choice between DTS-HD MA 5.1 Surround English, German, and French, with subtitles in the same languages. It’s here that things start to falter on this disc. To begin with, the volume is quite low, and even when you get it up to a decent level, action tends to overwhelm the dialogue. It’s one movie where you have to ride the remote for the duration. Also, it sound a little muffled and hollow at times, particularly when people are in vehicles, especially the Unisol truck. The sound lacks the brightness and immediacy that you’d expect, although the surround does adequately convey the ambience of the film, Christopher Franke’s characteristic score, and most especially the action. It still made me go looking for a stereo track.

The disc offers you the choice of English, German and French menus before booting up to an animated menu.

There are two commentaries to go with the film, beginning with the original DVD commentary from writer Dean Devlin and director Roland Emmerich.

A patchwork commentary was edited together for a subsequent special edition release, with a newly recorded offering from Emmerich and Devlin, along with contributions from Jean Claude Van Damme and Dolph Lundgren.

A Tale of Two Titans lasts 14:12, and JCVD and Dolph are interviewed separately about their lives and careers.

Guns, Genes, and Fighting Machines lasts 18:53 and is more of a retrospective making of with the stars and Devlin and Emmerich.

The Alternate Ending lasts 13:08, and makes you grateful for the existence of test screenings and focus groups.

Finally there is the theatrical trailer. All of the video extras on this disc are presented in 480i SD.

I’m not pretentious anymore, at least I hope not. I still love Universal Soldier as much as I always have, but I can at least be honest about it. It’s a 90s action movie, made before the advent of CGI, back when they had to do the stunts and action for real. It has Dolph Lundgren and Jean Claude Van Damme in their prime, and it doesn’t overreach. It doesn’t let the action overwhelm the story or the characters, and it doesn’t let spectacle be the whole point of the film. A few years later, Devlin and Emmerich were destroying global landmarks with impunity, and action cinema really hasn’t looked back unfortunately.

Universal Soldier’s outlandish premise about dead soldiers being reanimated, made super-strong, and put to work carrying out missions for the military makes for an engaging story. Part Terminator, part Robocop, things start going wrong for the Universal Soldier program when memories start to resurface in two of the units. Given that these memories are of how they died violently, in Vietnam decades before, at each others’ hands means that things aren’t going to end well for the program. Throw a sassy investigative reporter into the mix, and you have the scope for some light, culture clash comedy to mix things up from the action and body horror. The jumbled up memories cause Luc to see Veronica as someone to keep safe, and that means fleeing from the unit, especially Andrew Scott, who is still fighting the Vietnam War in his fragmented memory. Together, the reporter and the deserter try to uncover his past, and what was done to him, all the while evading the Universal Soldier program, who are trying to get their asset back, and stop the truth of the program being reported.

It’s fun, and it’s cheesy. That much is true, but cheesy isn’t the four letter word that it once was for me. I appreciate popcorn entertainment now just as much as I did in my teens and early twenties. This is a comic book action film, made when comic book movies didn’t need characters to wear capes. Universal Soldier is a great way to spend two hours or so, and on this disc from Studiocanal, the 4k scan has delivered a Blu-ray that really looks the part. It doesn’t sound as crisp as it should, which is disappointing, but that’s not a deal breaker. Finally, I can retire that DVD.