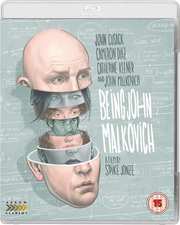 Being John Malkovich [DVD] [2000]
Not available

DVD
Being John Malkovich (US)

Review for Being John Malkovich

Think about modern film comedy, and I’m sure you’ll feel your IQ diminish as you contemplate the lowbrow, mass audience fodder that keeps them laughing in the aisles these days. It will have something to do with Seth Rogen, or MacFarlane, women and men will behave badly, there will be toilet humour, and witty dialogue will be added to delude you into thinking Paul Blart, Mall Cop is smarter than it actually is. There was a time around the turn of the millennium when movie comedies really were smart. They were razor sharp, intelligent, high concept movies that challenged you in the same way as David Lynch’s movies, only they tickled the funny bone. 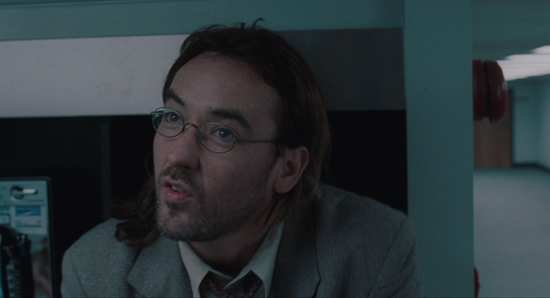 These films would usually have director Spike Jonze and writer/director Charlie Kaufman involved, often in combination, and they have proven to be some of the most notable films of the early twenty-first century. We’re talking films like Eternal Sunshine of the Spotless Mind, Adaptation, Synecdoche, New York, and probably the most famous of them all, Being John Malkovich. The film originally got a barebones Blu-ray release in the UK in 2011, but the following year, the film got a new transfer and something approaching a definitive release from Criterion in the US. It’s taken 7 years, but now Arrow Academy are giving the film its due in the UK, with the improved transfer and a generous selection of extra features. 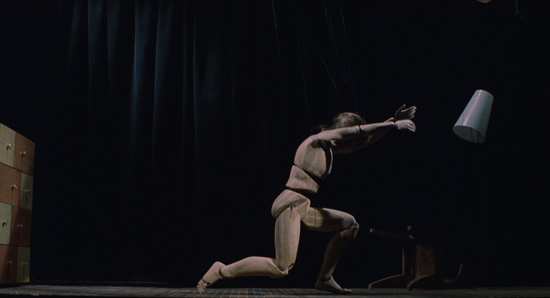 Craig Schwartz is an out of work puppeteer, whose idea of puppetry isn’t suitable for family audiences. It’s something that explains his unemployment and his puppet-busking related injuries. It gets to the point where his wife Lotte suggests that he finds employment in another field. His dexterity seems suited to filing, and he gets a job as a filing clerk at Lester Corp, where his first instinct is to fall in lust with office worker Maxine. It’s an odd company, on floor 7½ of a skyscraper. The ceilings are so low that everyone has to walk hunched over. But that’s nothing compared to the tiny door behind a filing cabinet in his office. It’s a door that leads into a tunnel, which itself leads into the head of actor John Malkovich. After 15 minutes of walking in John Malkovich’s shoes, Craig gets spit out at the New Jersey Turnpike, and so is born a moneymaking scheme. 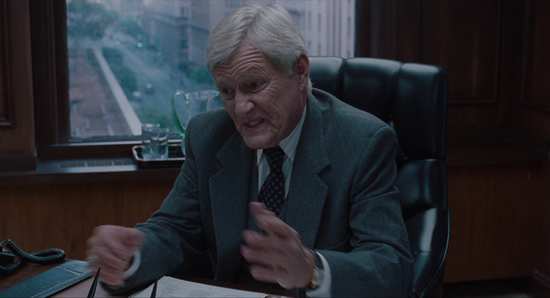 Being John Malkovich gets a 1.85:1 widescreen 1080p transfer on this disc with a DTS-HD MA 5.1 Surround audio track and optional HOH English subtitles. It’s not the best looking film, but its transfer on the disc seems impeccable. Certainly I had no issues when it came to compression or banding, detail levels were strong, and colours were consistent. The print is clean, no sign of age or damage, contrast is good, and the level of grain feels natural and organic. It’s just that the film is quite dark and naturalistic when it comes to lighting, and the image feels subdued and lacking in vibrancy. The dialogue is clear, and balanced well in terms of the film’s sound design, and the surround is put to great use, especially when the world turns Malkovich POV. 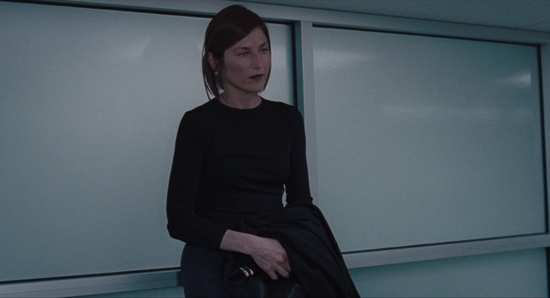 This release gets a new sleeve-art to differentiate it from the 2011 release, which itself used the fantastic poster art for the film. The disc boots to an animated menu.

The disc is rich with extra features, while the first run release of the film will also get a booklet with new writing on the film from Roger Keen.

On the disc you’ll find a Selected Scene Commentary from Michel Gondry, contemporary of Spike Jonze and director of Eternal Sunshine of the Spotless Mind. This lasts 59:04, and is quite anecdotal. It was interesting to read the disclaimer that it has been edited for reasons of accuracy, audience interest, and legal liability, and it makes me curious about that 2012 Criterion release from which it has been sourced. 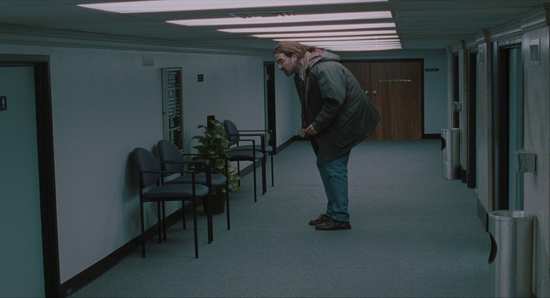 Illusion of Life is an all new featurette for this Arrow release, lasting 27:17, which looks at the marionette sequences and the puppets, with interviews with the puppeteers who worked on the film.

All Non-combatants Please Clear the Set lasts 33:17 and is a behind the scenes documentary put together for the 2012 release from the original b-roll footage.

John Malkovich on Being John Malkovich is an interview with the actor, again from the 2012 release, and for me is the best thing on the disc, an insightful and fascinating interview on the relevance of the film. This lasts 27:50. 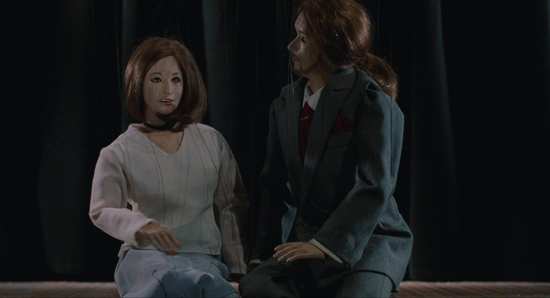 Spike’s Photos has an interview with Spike Jonze which lasts 15:26 and a 5:00 slideshow of Spike’s Photo Album.

The 7½ Floor (2:10), and John Horatio Malkovich: Dance of Despair and Disillusionment (4:16), are the documentary pieces from the film, presented here in their entirety. 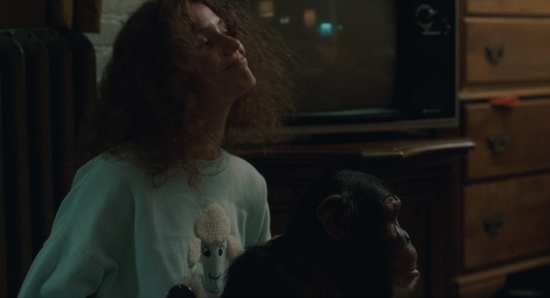 Don’t Enter Here, There is Nothing Here is honest at least. 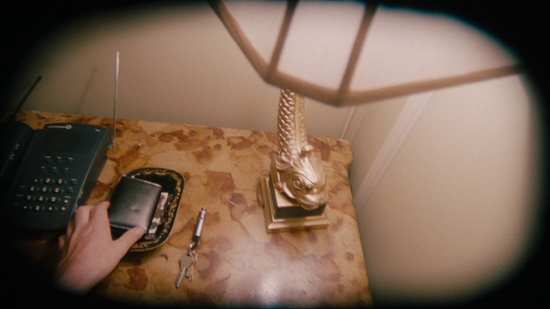 I first saw Being John Malkovich in the mid-2000s, and I didn’t get its relevance back then. When I watched it, it was a bizarre head trip of a movie, a whimsical fantasy that played with audience perceptions and delivered the unexpected. It was an original Hollywood movie, and you don’t get many of those to the pound. Fast forward 15 years, and all of a sudden this film is so relevant to celebrity culture today, the always on aspect of social media, the sense of entitlement that fans claim, and the ever present problems with identity theft. Being John Malkovich presents the ultimate in identity theft. It’s a film that has grown into its place in history the same way that The Truman Show did with the subsequent explosion of reality TV. 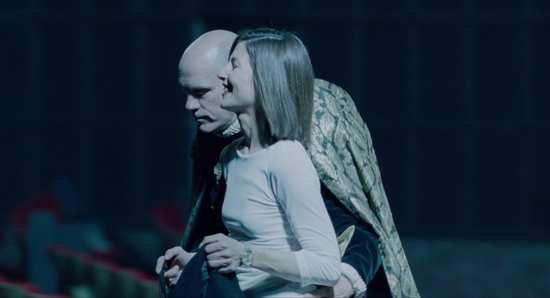 Like this year’s One Cut of the Dead, it’s a film with a concept so bizarre that you don’t want to go too deeply into it, lest it gets spoiled for the uninitiated. The basic idea of entering a door into John Malkovich is bizarre enough, but where the film ultimately goes with that is quite the brain-wrench. It’s constructed in a way that instantly leaves you askew. You have as your main cast John Cusack and Cameron Diaz, which in the late nineties might have been considered a Hollywood golden couple, only Craig Schwartz comes across as a grungy Jesus, while his wife Lotte sees Cameron Diaz accessing her inner frump. She’s obsessed with her menagerie of pets, while he’s all about the art of puppetry, and in a country where puppets are solely for Saturday morning kids’ TV, his adult, artistic take on the form is not appreciated. 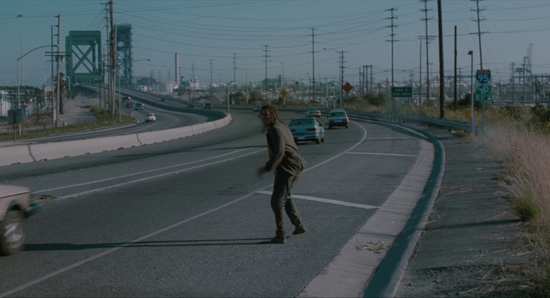 He winds up getting an office job, but the askew-ness merely intensifies with the Lester Corp offices on floor 7½ of the Merten-Flemmer building, a floor that can only be accessed by hitting the emergency stop on the lift and using a crowbar to pry the doors open. It’s also a floor where the ceiling is just five feet off the floor, so most everyone has to walk and work with a hunch. It’s here that Craig meets the provocative Maxine and it’s here he finds the doorway to the New Jersey Turnpike, via John Malkovich’s mind. Maxine seems like the promise of something better than a humdrum life of a frumpy wife wanting a baby to go with her pets, hitting his head against a brick wall as a puppeteer, and the daily grind of the office, but she imaginatively and bluntly rebuffs his clumsy advances. But she is an enthusiastic partner in setting up a business selling rides in John Malkovich, and when she meets Lotte, an attraction between them forms, although only when Lotte is looking at Maxine with John Malkovich’s eyes. And that is only the start of the road of weirdness this film travels on. 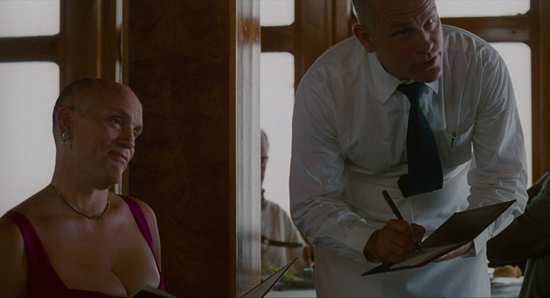 It’s nice to be reminded that comedies can be thought-provoking too, and you don’t need to keep watching sequels to The Hangover. Being John Malkovich is one of the finest film comedies from the turn of the millennium, a high concept story with amazing writing and engaging characterisations. It’s a one-off, and should be in every film collection.