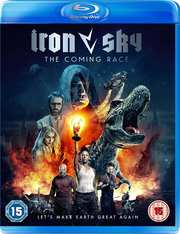 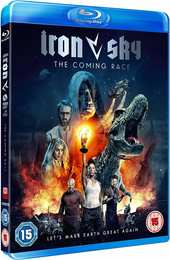 They only went and made a sequel to Iron Sky. Once more, we get a part crowd-funded action movie that goes where mainstream studios fear to tread. Last time it was Nazis from the moon attacking the Earth, this time it’s Lizard-men from the centre of the Earth, although there’s more than enough in the way of ideological red flags being waved to put off any Hollywood giant. When the tagline is Let’s Make Earth Great Again, you might be forgiven for expecting the corpulent orange one to make an appearance, but recall that in the first movie, President Sarah Palin presided over Armageddon. There won’t be any Tweets in this film, but social media does play a role.

30 years have passed since the final nuclear war between Earth and the Moon Nazis wiped out civilisation, except for the few survivors who made it to a ship and escaped to the moon, moving in with the surviving Nazis on their moon base on the dark side. Thirty years, holding onto life, although it seems that only Obi Washington holds onto hope. She’s the daughter of James Washington and Renate Richter, heroes of the last war, and she spends most of her time patching together and maintaining the few life support systems they have left.

No one is expecting any contact with Earth at this point, which makes the arrival of a battered and jerry-rigged ship quite the shock. It’s carrying the ship builder, a Russian named Sasha, and a handful of refugees, as well as one, chillingly familiar face. They learn that while the surface might be choking under a nuclear winter, the Nazi legend of a Hollow Earth is real, that there are people still living in the centre of the Earth, and there’s a miracle power source that might mean survival for humanity, as well as a cure for Obi’s terminally ill mother.

You get one disc in a BD Amaray case, which boots to an animated menu. There are no extras on the disc, and you even have to choose your audio options with your remote during the film. The image comes in 2.35:1 widescreen 1080p form, and you have the choice of DTS-HD MA 5.1 Surround and PCM 2.0 Stereo English with HOH subs, and burnt in subs for the foreign language scenes. The audio is fine, some decent surround making the most of the action and FX. The image quality is just as stricken with banding as the original movie, especially for the digital effects, but in contrast, a lot more of the sequel is accomplished practically. There’s less reliance on the digital backlot. The production design is impressive, does what it needs to tell the story, and the digital effects are a step up from the first film. That’s also true of the overall production value.

Iron Sky - The Coming Race didn’t have as warm a reception as the original film by the press, but I found I actually preferred it to the first Iron Sky. The original film, made in 2012, was very much a product of its time; the satire was biting, and for me, often overwhelmed the humour with its blunt wit. It felt like the movie would stop to make a topical reference before resuming. However, Iron Sky - The Coming Race takes place in a world that follows on from war with the moon Nazis, President Sarah Palin, and nuclear Armageddon in the year 2018, and obviously can’t explicitly reference current events. Despite the ‘Let’s Make Earth Great Again’ tagline, the only nod to current events is an early refusal to accept a refugee ship, but no walls get built, and no one gets put in any cages. It was far easier for me to enjoy Iron Sky – The Coming Race as a movie without worrying too much about what it was satirising, and that actually made it more fun.

Iron Sky concerned an eighty year old conspiracy, that Nazis had survived on a base on the dark side of the moon, and had been plotting their revenge all that time. The Coming Race has a conspiracy that reaches back to the dawn of time. We learn that alien lizard men crashed on Earth at the time of the dinosaurs (this movie has that common B-movie conceit that dinosaurs and primates co-existed at one time), and one of these Vril starting tinkering with DNA. The asteroid came about and wiped out the dinosaurs, and humanity inherited the Earth, while the Vril escaped to the centre of the planet. But the Vril didn’t like these upstart apes taking over the world, and have since been working through history, through the immortality bestowed upon them by the Vril-ya power source, to drive humanity to a destructive war, so they can take over the surface again.

It’s the promise of this power source, Vril-ya, that has our heroes venturing to the centre of the planet, looking to obtain it. In true Doug McClure manner, the inner world is a fecund jungle, populated by dinosaurs, and a lot of the humour comes from seeing just who the Vril have been through the ages, how they’ve interfered on Earth. Of course the film’s biggest problem is that it blows its biggest surprise in the trailer, with a certain dictator riding a T-Rex. That aside, I certainly appreciate the sense of humour in this film a lot more than the first. With the survivors of the human race, clinging to existence on the dark side of the moon, it was funny to see that religion had survived, although this religion worships all things Apple, and has a lot of fun with their design ethos and purity of form. Anyone caught jailbreaking a device gets explosively excommunicated. There’s an added dimension when the ‘head priest’ meets a certain Vril infiltrator.

The film has a nice pace to it, doesn’t outstay its welcome, the story works well, and the characters are fun. As I said, I enjoyed Iron Sky – The Coming Race a little more than the first film; it’s fun, disposable, b-movie fare, and given the price it can be had for at most supermarkets, is well worth picking up if you enjoyed the original.

Nice review Jitendar, I really want to see this film sequel, as i have Iron sky on DVD, as it was really well made. Cheers Bandi.
posted by bandicoot on 13/9/2019 19:55