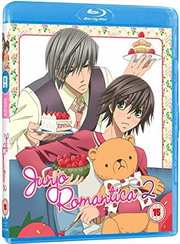 I really couldn’t make up my mind about Junjo Romantica when watching Series 1 as this review will attest. It was OK as far as it went although I must confess to feeling slightly uncomfortable with the premise of a slightly older man ‘pressing’ his attentions on a younger man, particularly when the ‘pressing’ wasn’t always clearly consensual.

Then again, the series isn’t targeted at middle-aged, hetero-sexual white men apparently, or gay ones, which may be surprising. According to common marketing wisdom, it’s actually aimed at and appreciated by young heterosexual ladies. Mainly in Japan. Go figure.

The series is over a decade old now and looks it, with mobile phones and fashions all looking dated and even more telling perhaps, the quality of the release looks like upscaled SD to Blu-Ray, perhaps a pointless exercise as this looks and feels like an average quality DVD.

So with all that negativity set to one side, how did Series 2 shape up? Well, for me, not particularly well as it frankly took me an age to wade through it. A couple of episodes a week was about all I could endure this time around. It felt like work and I endlessly procrastinated about it despite the knowledge that this review, entrusted to me by friend and colleague Jitendar Canth, was hopelessly overdue. This set came hot on the heels of Series 1 and really didn’t feel ready for it. That said, if you’re a fan of the first series then the good news is that there is little change to pace, narrative or action here. What’s more, both series are only 12 episodes. Sheesh! Some people would binge-watch that in a night.

All three couples are correct and present, split by theme. So the principles, Junjo Romantica (Usagi and Misaki), ably supported by Junjo Egoist (Hiroki and Nowaki) and Junjo Terrorist (Shinobu and Miyagi). Each of the couples have their issues and there is a rhythm of ‘break up to make up’ with lots of lively argument and discussion throughout. There is also a weird dynamic that plays out again and again, particularly with Usagi and Misaki, where Usagi insists he doesn’t love Misaki, but consistently ‘melts’ when getting a kiss that he protests he doesn’t want. I’m guessing that this is a cultural thing understood by young teenage girls in Japan but is pretty perplexing to the rest of us.

Series 1 opened when Usami, a wealthy young novelist, is distraught when Misaki’s older brother, with whom he is in love, announces that he is getting married. Indeed, it’s Misaki’s sympathy and understanding that makes Usami transfer his affection to the younger brother. So when Misaki’s older brother turns up again in Series 2 and starts trying to win Usami’s affections, things do get a bit complex. The reappearance of Misaki’s brother is also a good excuse to visit some of the back-story absent from Series 1, where we get insight inti Usami’s upbringing where he would spend a lot of time, even as a child, writing on his own. Weirdo.

Meanwhile, with couple number two, Nowaki is besotted with Hiroki but doesn’t believe that the feeling is mutual. After all, Hiroki won’t even call him by his real name and seems permanently aloof.

Finally, couple number three also seem to be having issues. Shinobu seems a bit cool about his previous obsession with the older Miyagi, a 35 year old University professor. Curiously, this age difference emerges as a central theme for the series as it also defines Misaki and Usami’s relationship too, though the power in that relationship seems to fall to the older man.

Despite being fairly confusing inasmuch as it’s tough to figure out what the series is trying to say, on another level, it seems to work, particularly if viewed as nothing deeper than a slice-of-life soap. Maybe that’s its point – some vacuous entertainment, and there is nothing wrong with that. But I can’t help fighting off the feeling that it’s striving for something more which, for me, is never quite delivered.

As with Series 1, the video is of questionable quality, upscaled to HD from a SD master, albeit in 16:9. After all, the series is over a decade old. It’s perfectly viewable but probably not worth upgrading to Blu-Ray of you already have a DVD. The animation itself is artfully done with some very pleasing characterisation, tasty looking backdrops and lots of emotion.

Audio-wise, it’s Japanese with subs or nothing, which is actually fine. It’s not hard to follow.

Overall, Series 2 is neither better nor worse than Series 1; pretty much more of the same. This is not really my cup of tea, a questionable rom-com imbued with soap like drama. On the plus side, its bold normalisation of same sex romance is to be applauded, though would have been even more sound had they not included some questionable, potentially non-consensual persuasion as part of that norm.