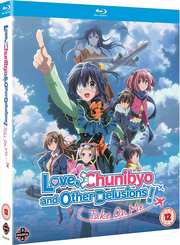 Love, Chunibyo and Other Delusions! The Movie: Take On Me (Blu-ray Details)

Review for Love, Chunibyo and Other Delusions! The Movie: Take On Me 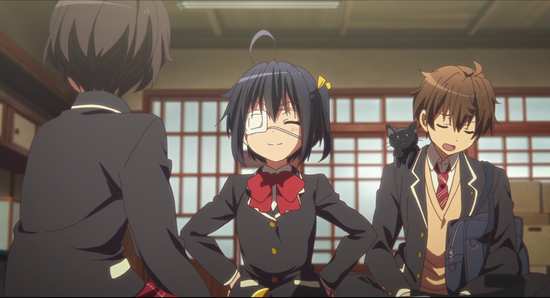 Yuta Togashi was a typical Chunibyo in middle school. He was under the impression that he was the Dark Flame Master, blessed with supernatural powers, and destined to have a more meaningful existence than anyone else. Quite rightly, he was ignored by his classmates, and humorously tolerated by his family. That phase quickly wore off, although remembering the dork he used to be tends to send him into paroxysms of extreme embarrassment, wishing a painful death to his younger self. When he started high school, he met Rikka Takanashi, a girl in an eye-patch wearing a loli-goth outfit and suffering from the kind of Chunibyo that he thought he had gotten away from. Even worse was that the Wicked Lord Shingan knew who Yuta used to be, and she blackmailed him into helping her. That is how they started the Far-East Magical Society as an after-school club, and recruited some like-minded students, both reluctant and eager. And over the course of their adventures, Yuta and Rikka began to fall in love. 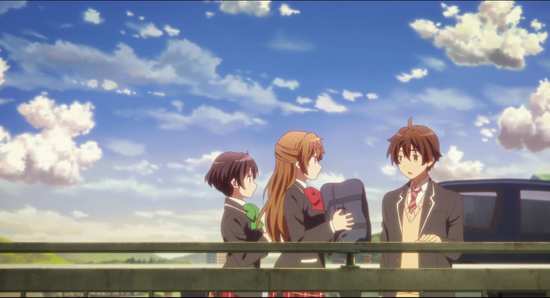 As the film begins, Yuta and Rikka are about to start their third year in high school, and they still haven’t advanced their relationship beyond the occasionally holding hands stage. Rikka shows no sign of getting past her Chunibyo phase, which threatens to make college an interesting experience. That’s too much for Rikka’s older sister Touka to contemplate, and she decides to take action. She returns to Japan with the plan to take Rikka to Italy with her. Rikka thinks it’s just for a summer vacation, but when all her belongings are packed away and loaded on a truck, the penny drops. It’s for good. There’s only one thing for it. Rikka and Yuta’s friends advise them to elope. But getting away from Touka won’t be that easy. 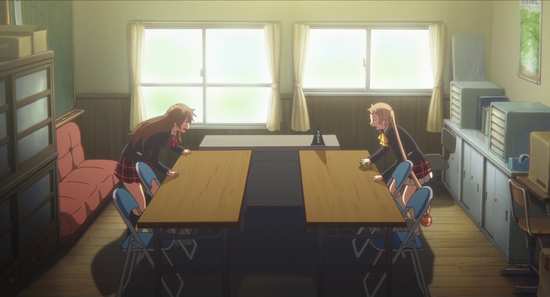 Love, Chunibyo and Other Delusions – Take On Me gets a 1.85:1 widescreen 1080p transfer. What we have here is a really nice presentation of the film, clear and sharp throughout, with strong, bold colours, and bringing across the animation as smoothly and as faithfully as you can hope for. Chunibyo is a Kyoto Animation series, and that comes across in the style of the animation, and the bright and slightly hazy, softened look to the piece. This being an original animation, and a feature film at that, the quality steps up from the television series, and we get a whole lot more detail and imagination in Rikka and Yuta’s whistle-stop tour of Japan. 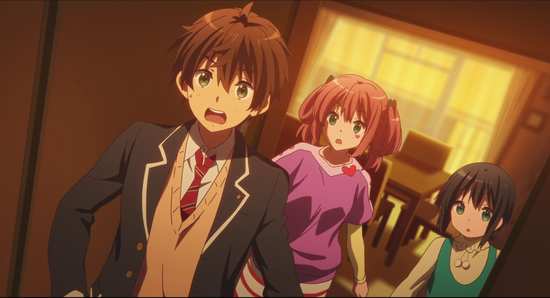 You have the choice between DTS-HD MA 5.1 Surround English and Japanese, with subtitles and signs locked during playback. I went with the Japanese, and was very happy with the surround experience. The Japanese cast is the same and it is very much my preferred way of watching the film. The music suits the film well, but one point deducted for a film called ‘Take On Me’ lacking any soundtrack presence from A-Ha. The subtitles are timed accurately and are free of typos. 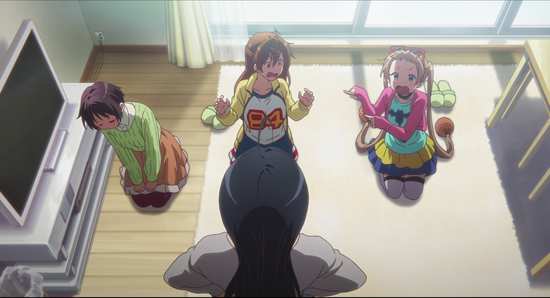 Manga Entertainment have a new logo, and you’re left wondering if the Blu-ray has frozen in the player as you wait nearly thirty seconds for it to move onto loading the static menu. The film is followed by a translated English credit reel.

On the disc you’ll find 2:50 of Japanese Promo Videos. 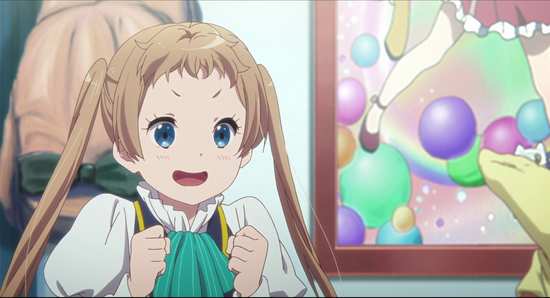 There’s also some repetitive fun in the Kotatsu Photo Session Shorts, of which there are 3 running to 16:29. They’re basically pre-movie warnings for the cinema, advising you to put away your phones, not to pirate the film, or kick the seat in front, but with added banter from the characters. 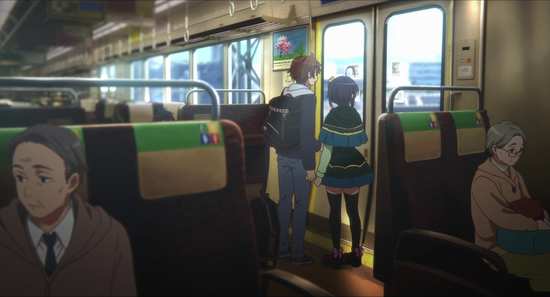 You get the textless credits for the film, which for the end credits means 6:14 of black screen with music.

Finally there are trailers for UQ Holder, The World God Only Knows, Gatchaman Crowds, and Hitorijime My Hero. 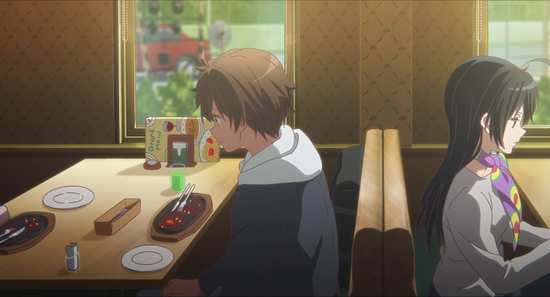 Studio KyoAni managed to pull it out of the fire for the final (to date) Chunibyo outing. The spectacular first series might have been undone by the frankly unnecessary second, and the compilation movie did nothing to help, but Take On Me reminded me of what I so loved about the first series, and it leaves us on the same kind of positive, forward looking ending that promises a happily ever after for Rikka and Yuta, even if it doesn’t explicitly show one. 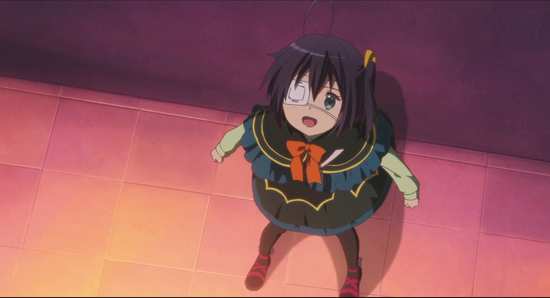 It does rely on the unlikely supposition that their relationship has been stuck in idle for the last couple of years, although the second series gives that daft idea precedence. And just like that second season, the film is all about giving Rikka and Yuta enough of a push for them to actually get beyond the occasionally holding hands stage. In a plot development recycled from the series, Rikka’s sister Touka shows up, announcing that she will be moving to Italy and taking Rikka with her. 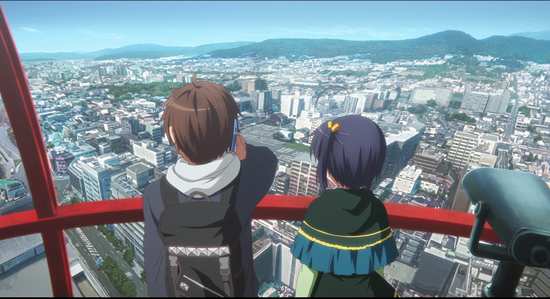 This time, Rikka and Yuta take the advice of their friends and elope, which in this film is a grand tour of Japan. But their friends, or rather Dekomori and Nibutani (a.k.a. Morisummer) wind up having to betray them, when Touka threatens to release incriminating material on them. This is the film’s masterstroke. If the Chunibyo love story between Rikka and Yuta was always the main focus of the story, the second character arc was the amiable sniping between Dekomori and Nibutani, so in the film, the romantic geek tour of Japan is counterpointed by the odd couple grousing of their pursuers. 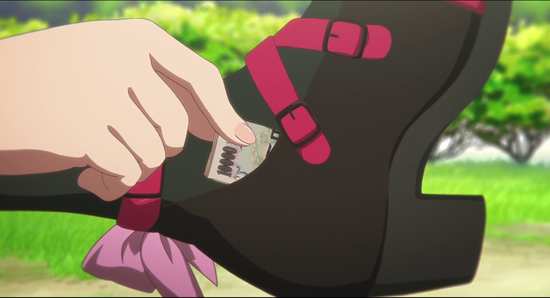 While these four characters hold the main focus of the story, the rest of the cast do make an appearance, and even have their time to shine, while Shichimiya is nowhere near as annoying as she was in the second season. Also, if you’re a Tamako Market fan, there are a couple of ‘cameos’ here that will be sure to bring a smile to the face. 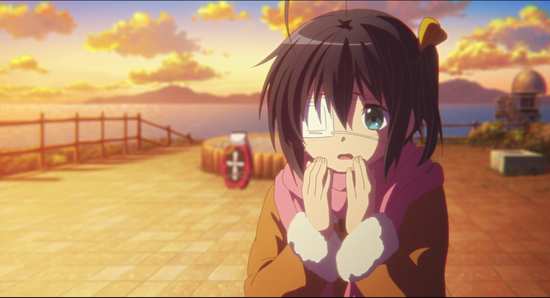 Love, Chunibyo and Other Delusions Heart Throb was an unwelcome reset button to the first series, which opted to give fans more of the same instead of moving the story forward. Take On Me has to deal with that poor choice, get Rikka and Yuta’s story moving again. A road-movie of sorts is the perfect way to do that, and Rikka and Yuta are forced to re-examine just what is important in their relationship. If you’re invested in that, then this film will satisfy, giving the story the kind of ending that the first season did in the first place, before the second undid it. 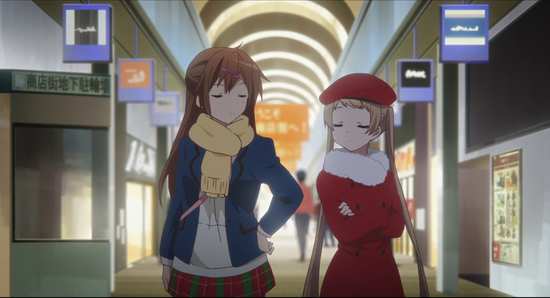 Love, Chunibyo and Other Delusions – Take On Me has the trademark humour down pat; Dekomori and Morisummer are guaranteed to make me laugh, while Rikka gets chastised with a chop to the head eliciting a cute yelp on more than one occasion. But the film also gets its heart right, making you care about the characters, giving you that vicarious glow when things turn out right, and a minor emotional tremor when things seem to be going wrong. It’s never too angsty for a slice-of-life piece, but you care nevertheless. Manga’s Blu-ray presentation is just what the film needs.