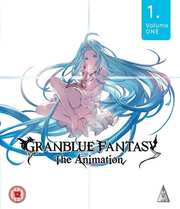 Unfortunately, reviewing titles never takes my personal preferences into account. I like to mix things up, follow one genre with a different genre, so I can have a reset of expectations in between. But this month, MVM leave me no choice but to watch two fantasy anime shows in a row. What’s worse is that I kicked off with the rather neat Grimoire of Zero. I’m now left expecting similar quality from Granblue Fantasy, and that is patently unfair. After all, Granblue Fantasy is based on a videogame. Then again, it is a videogame with Final Fantasy credentials for its creators, and the anime is being released under the aegis of Aniplex, who have a reputation for a certain level of quality in their catalogue. But we do also get Aniplex’s release strategy, with a 12 or 13 episode series being released in 2 parts. 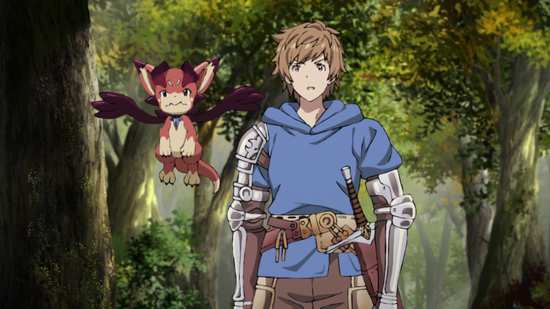 When a pretty girl falls from the sky, practically into your arms, that might sound like the start of a fantastic adventure, but for young Gran it seems like the end, when he’s killed by a fire-breathing Hydra. He’s fortunate in a way that the girl, Lyria is being pursued by the kind of ruthless military that would unleash a Hydra. The empire wants Lyria back; she’s a girl with a mysterious background, with incomparable power. To save Gran’s life, she shares half of her life force with him, but that now means that they can’t be separated. To fully restore Gran’s life, and hopefully to find out just who Lyria really is, they set off on a quest to find the legendary island of the Astrals.

The first seven episodes of Granblue Fantasy are presented on this Blu-ray from MVM. 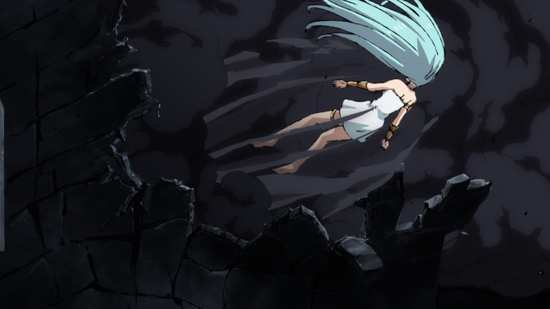 Another Aniplex show gets another impeccable transfer to Blu-ray. The 1.78:1 widescreen image is excellent, with no signs of compression or the dreaded digital banding. That’s despite having seven episodes on one disc, as opposed to Aniplex US’ release which spreads them across two. Granblue Fantasy takes a somewhat different approach to its characters, in that the line art is ever so slightly rough, not quite as polished as the current trend in anime. This has the effect of having the characters and the background art, the world design all come together as a piece of artwork almost. The show looks really good, while the quality of the animation matches the aesthetic style. 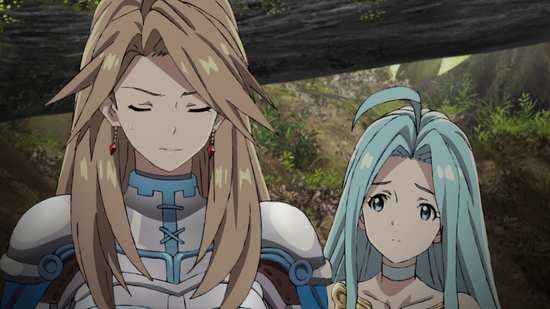 You have the choice between PCM 2.0 Stereo English and Japanese with optional subtitles and a signs only track. The audio is fine, with voice actors cast well for their roles (I watched the Japanese audio and gave the English dub a quick try, and both were very watchable), while the show gets a grand theatrical score that reflects the epic scope of the world, and the adventuring nature of the story. The subtitles are accurately timed, and free of typos, although there is a glitch at 52:29 with a shrunken and off centre subtitle caption. There are also no subtitles of the theme songs. 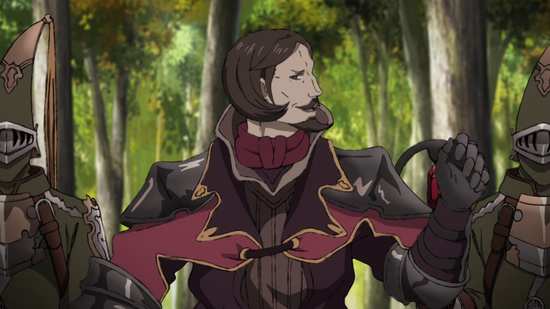 The disc boots to an animated menu and the only extras are the textless credit sequences.

I think I have been spoiled for fantasy shows by Grimoire of Zero, which I recently reviewed, and I may have been spoiled for quite some time, as I just wasn’t thrilled by the first half of Granblue Fantasy. The first thing I did was check the rating at the BBFC, and I had to roll my eyes at the 12 rating that it has received. Certainly, some of the action and the violence is pushing it a bit, but when it comes to the tone of the story, the simplicity of the narrative, and the cute and fun personalities of the characters, I get the feeling that Granblue Fantasy is aimed at the younger demographic. 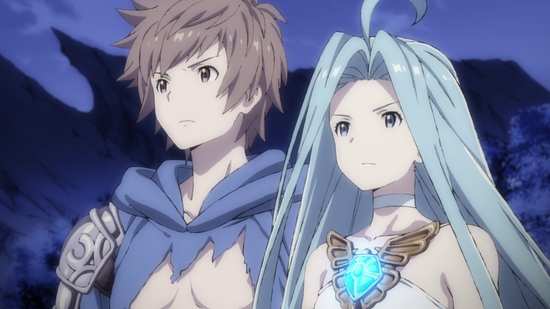 It also has that infuriating problem that I find with some anime, that it makes me want to eject the disc and watch its inspirations instead. And Granblue Fantasy does wear its inspirations on its sleeve, aping the opening sequence of Laputa: Castle in the Sky, while its world of sky islands and airship travellers puts me in mind of Last Exile, if it was set during the Renaissance. Then there is the mascot character of Vyrn, a baby dragon of sorts who is voiced by Rie Kugimiya in the Japanese version. It seems the only direction she received was “Do Happy from Fairy Tail again”. Later towards the end of this set of episodes, we meet a mage called Io, who because of her relationship with her ‘master’ reminded me of Koopa from The Tower of Druaga. Let’s not forget the whole male protagonist dies and is brought back to life by the female protagonist and is bound to her, which speaks of Shakugan no Shana among many others. 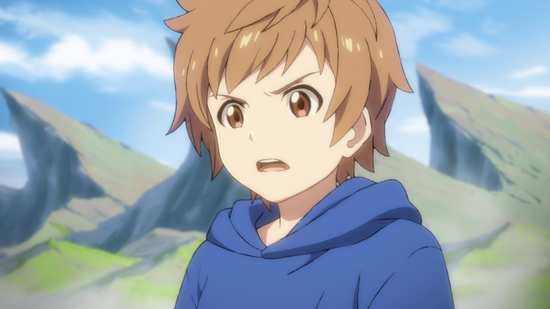 I could also pick nits at the simplicity of the writing. Lyria has been a science experiment all her life with no knowledge of the outside world, while Gran is the inexperienced kid who stumbles into the conspiracy, gets killed and resurrected. Yet at the end of the first episode, the two of them instinctively know the right magic spell to summon a bad ass dragon. I’d be rolling my eyes into oblivion, had I not decided that this show is aimed at an audience younger than its BBFC rating. 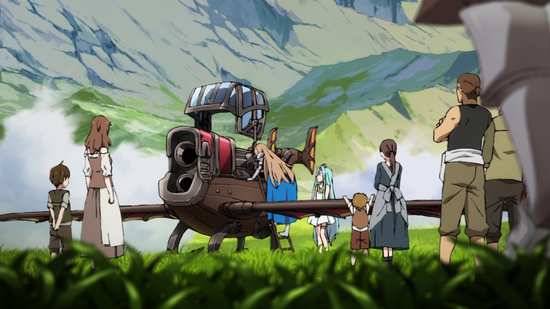 The show also wears its videogame origins on its sleeve, with the story following a quest based structure, as the party slowly accumulates over the episodes. The first few episodes introduce the main characters, Gran, and Lyria, Vyrn and Katalina. Gran is the eager young hero, dreaming of travelling the sky and finding the Island of the Astrals, where his long absent father was last heard from. Lyria is the mysterious girl, apparently with some connection to the Astrals who for obvious reasons also wants to find the Island, to find out who she really is. She’s been raised/created by the Empire for nefarious purposes, and they will do whatever it takes to get her back. It also seems that she isn’t the sole experiment. Katalina is the warm-hearted knight who took pity on Lyria, and decided to rescue her from her plight, and as mentioned, Vyrn is the mascot animal with Happy from Fairy Tail’s personality and voice. 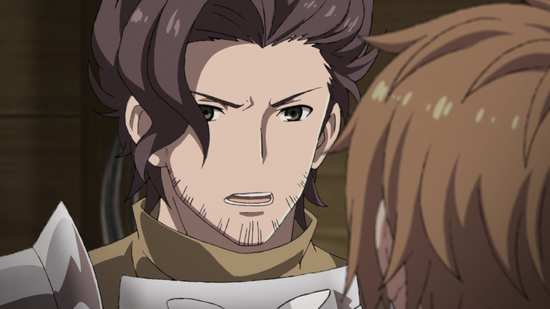 Later on we meet Rackam (Han Solo type), when the party needs a ship to get off the island and begin the journey, as well as a navigator to pilot the ship. As this collection ends, we meet the precocious and cheeky mage Io. As the opening credits indicate, there are two positions in the cast yet to be filled, for which we’ll have to wait for the second half of the series. 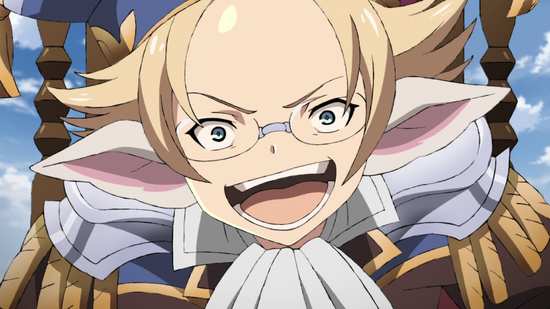 The first ‘mission’ is survival, as Lyria and Katalina escape from the Empire and wind up on Gran’s island. Naturally a hero type is going to protect the cute elfin girl who fell from the sky, but facing the Empire he’s in over his head. The four of them together manage to succeed though, as Lyria shows some potential of the power she has, especially after she’s linked to Gran. But staying on the island isn’t an option, especially as the Empire is still after them, and they need to find the Island of the Astrals. The second ‘mission’ is to find a ship and a navigator, although convincing Rackam isn’t easy, as he’s emotionally tied to a wrecked ship that he’s spent his life trying to salvage, It’s when the island is threatened, and they have to face a Primal Beast named Tiamat (don’t worry about the jargon, as the show is good at easing the viewer into its worldview) that Rackam gets motivated. Solving that problem gets them a piece of the Sky Map, which leads to their next mission. 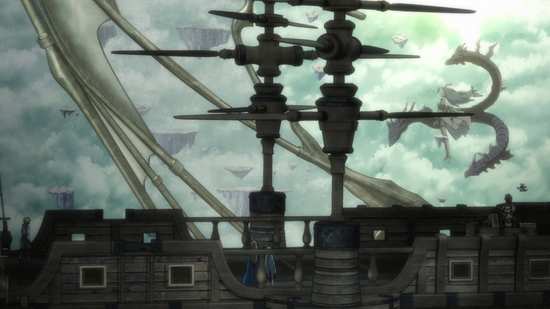 That means going to the Island of Valtz, where the mission is to find the Archduke, who has gone missing. They need to be discreet, and they wind up working with the mage Io, who is personally invested in finding the Archduke, her master. The mystery behind his disappearance is another Empire plot, and things get complicated, but succeeding means getting another piece of the Sky Map, which leads to their next mission... 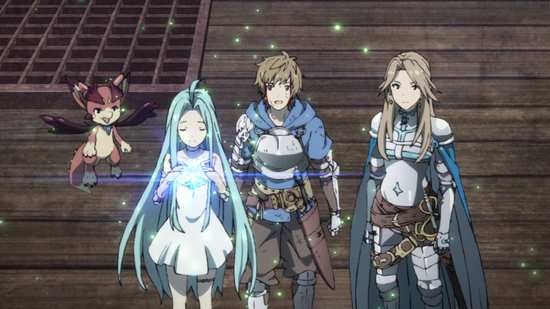 I have to say that I had a hard time maintaining my interest in this show, the simplistic narrative and the cookie cutter characters did nothing to inspire me. There just isn’t enough in the way of originality to make me pay attention. That’s despite the production values of this show being sky high (pun intended). It’s a gorgeous looking show, the characters are appealing enough, the story unfolds at an attractive pace, and you can’t accuse Granblue Fantasy of being un-entertaining. It’s just that it’s aimed a more forgiving demographic than mine.