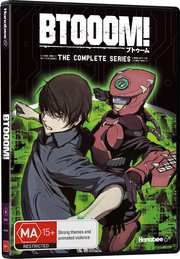 When I first reviewed Btooom! for this site, it was the MVM release, back when MVM were still being a little picky about which shows got DVDs and which got Blu-rays. Btooom! was one of the shows that didn’t get a UK Blu-ray release. It was also quite the pleasant surprise when I watched it, as I was still not a fan at the time of the ‘lost in a VR game’ genre, and Btooom! initially looked like another Sword Art Online. It actually turned out to be a survival anime, with a handful of characters thrown into an adverse situation, forced to fight to survive in a videogame made brutally real. It was good enough that I wound up lamenting the lack of a UK Blu-ray release, hoping that an HD transfer would make the Madhouse animation shine even more. So, this year I went and imported the Hanabee release of Btooom!, which in a unique release from them is actually a combo release, with both Blu-rays and DVDs in one Amaray case. 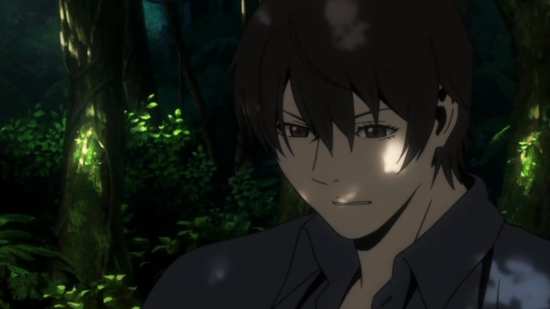 Ryouta Sakamoto was rapidly working his way up to becoming a superstar. That’s a superstar in the online explode-‘em-up Btooom! It’s the highly popular video game from Tyrannos Entertainment, where you compete online as teams, armed only with a variety of bombs, trying to kill opposing teams. Ryouta even had an online virtual wife. In the real world he was an unemployed slacker, living his life shut up in his room, playing video games, hoping for his dream job at Tyrannos Entertainment, driving his mother to despair. Until he woke up on a non-descript South Pacific Island, with a green chip in his hand, and armed with a bum-bag full of bombs. He’s now meant to play Btooom! for real, against actual living people. He needs to get 7 kills, collect seven of the chips, which come free from corpses, but can’t be removed from the living without surgery. He has to become a killer Btooom! player for real, and he doesn’t even know why he’s on the island. 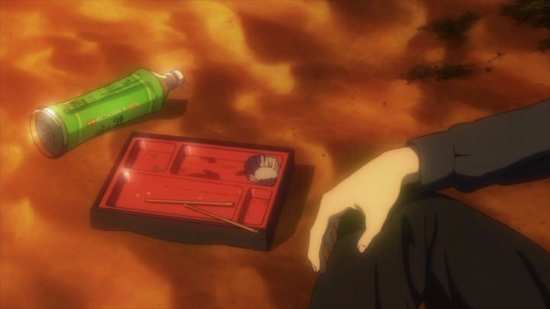 12 episodes of Btooom! are presented across two Blu-ray discs from Hanabee. This combo release also contains the show on DVD, the same discs that were released in the UK, but Region 4. 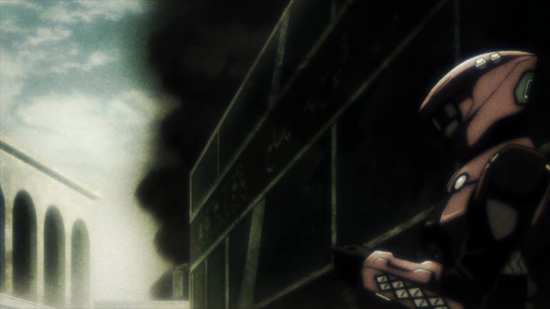 Btooom! gets a 1.78:1 widescreen 1080p transfer on these Blu-ray discs. The image is clear and sharp throughout, and there are no apparent issues with compression or aliasing, while digital banding is kept to a minimum, and really restricted to the darker scenes, or scenes with smoke. It’s a Studio Madhouse production, and that quality does tell in the character designs and the animation. However, it’s not the big leap up in clarity that you might expect, as Madhouse have opted for a softer look to the animation, something of a warm haze filter applied, that you wouldn’t really notice in SD. It’s a very moody and effective look for the show that suits its more adult content well. It also becomes apparent how this show managed a 15 rating, as this is one story where the animators choose to self-censor, pre-empt potential complaints from broadcasters by toning down the extreme content themselves. Hence the fog of war tends to persist unnaturally long over scenes of carnage, dismemberment and viscera.

The images in this review were taken from the DVD component of the release and do not reflect the Blu-rays. 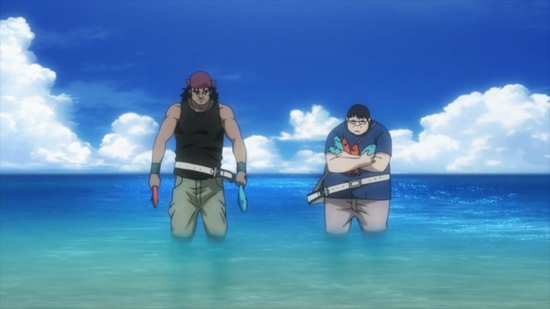 You have the choice between DTS-HD MA 2.0 Stereo English and Japanese with translated subtitles and a signs only track, locked to the appropriate track. The stereo does a good job in bringing the show’s explosive action sequences across, while the music suits the show well. The Blu-ray discs have the show at the correct frame rate, so you don’t have to worry about the 4% speed-up and pitch alteration on the DVDs. The one other problem I had with the DVDs, that of low dialogue volume isn’t an issue at all with the Blu-rays. The subtitles are accurately timed and free of typographical error. 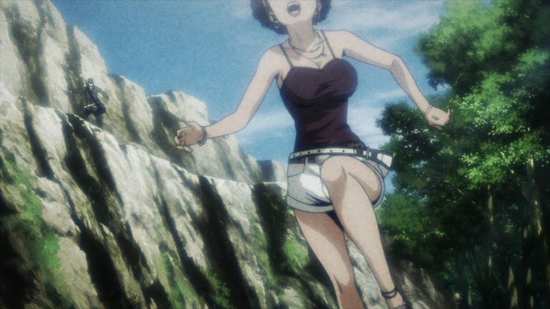 Both discs gets static menus, while each episode is followed by a silent white text on black, English language credit scroll.

All of the extras are on disc 2, including 3 Japanese Promos and 3 Japanese TV Spots as well as both sets of textless credits. 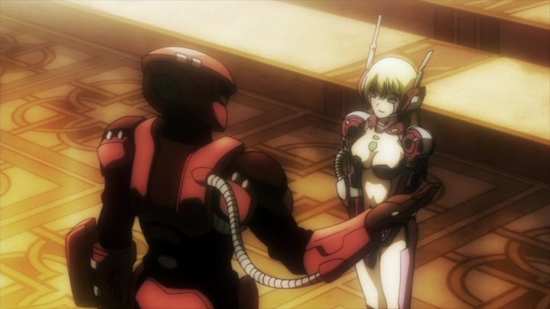 You also gets two Btooom! Digests, 2 minute recaps of characters in the show, and how they meet their demises.

You’ll also find trailers for Another, Girls und Panzer, Little Busters, and Say, “I Love You” 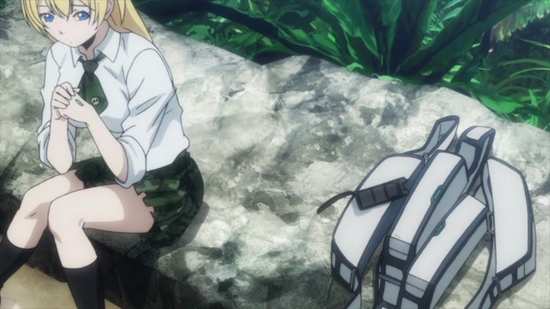 Let me put my biases on the table from the outset. I really did not want to watch Btooom! The whole videogame aspect of the show, so soon after Sword Art Online really put me off. Fortunately it doesn’t work the same way in Btooom! as it does in the other show. Here, the main protagonist is a hardcore gamer sure enough, spending most of his free time online playing Btooom!, but the twist is that he’s picked up and deposited on an island, and then expected to play the game for real. There are no VR helmets, no digitally created fantasy here. Btooom! is very much a ‘real world’ show, as much a show which features implosion grenades, and implanted radar chips can be realistic. 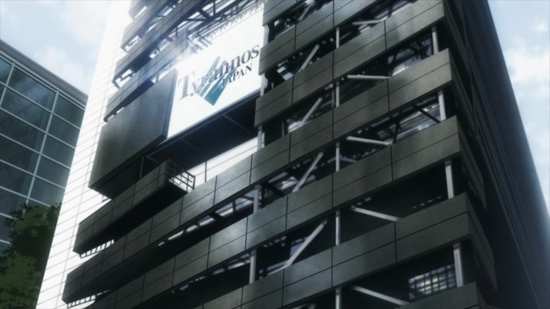 I still didn’t want to watch Btooom! though. Survival games in anime and manga aren’t exactly rare, and I’ve already mentioned two of them, Gantz and Battle Royale, while MVM quite recently also released a live action movie called Death Game. I have to be in the mood for these types of shows, which take average individuals out of their everyday lives and pit them against each other in contrived fights to the death, to reveal the true inner core of their personalities. Will they retain their humanity? Will they succumb to animal instincts in their desire to survive? Will they play the game? Will they try to escape? Will they cut their own feet off with a hacksaw? Start watching one of these shows in the wrong frame of mind and you’ll wind up seeing them as exploitative torture porn before you see the subtleties and narrative qualities beneath the surface, and I’ll be honest, I may have started watching Btooom! for this review, but I was really in the mood for Ah My Goddess! 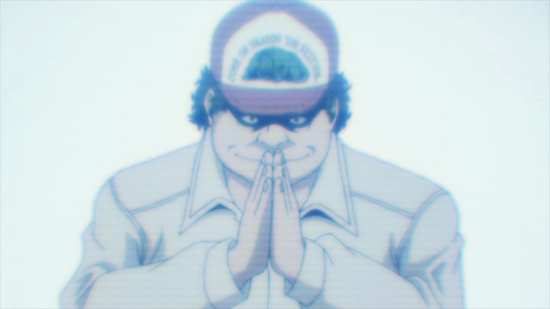 Yet I found myself enjoying Btooom! That’s enjoying in the ‘force myself to watch each new episode, reluctantly sitting down to partake of the usual character studies in stressful situations, as previously normal human beings turn on each other at the behest of an invisible and malevolent overseer’ way. The damned show hooked me! I may not have been in the mood to watch people do nasty things to each other with high explosives, but I wound up glued to each episode regardless. 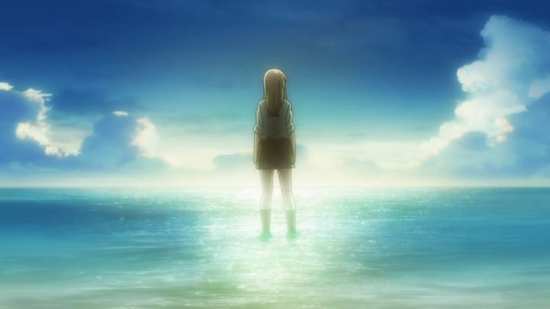 It’s short for one thing, which means that it has to tell its story in the space of just twelve episodes. It doesn’t have the luxury of procrastination in the way that Gantz did, which lengthened out its run with endless vignettes of players standing around, psychoanalysing the situation, while the bad guy is helpfully pausing before resuming his killing spree. The action sequences are really well choreographed, there’s quite a bit of tactical thinking that goes into them when two or more characters face off, and the usual Studio Madhouse quality really does support this. The characterisations too are interestingly done, although the supporting cast do get short shrift on occasion. What is important is that the show concentrates on its main cast, and develops its story, and their back stories well. 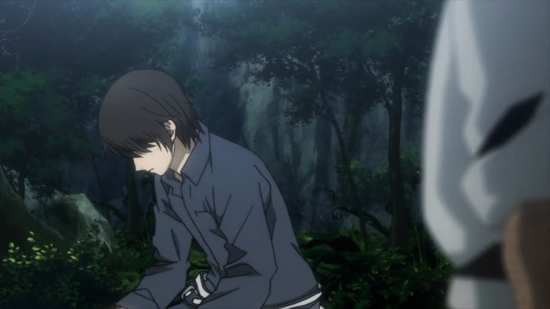 The show may have an open ending, but in terms of character it develops and concludes a very well told narrative arc when it comes to the show’s protagonists, Ryouta and Himiko. Ryouta is the NEET game addict at the start of the show, great at playing Btooom! online, but useless for anything else, and directing his unfocused rage at the world and ‘adults’ that fail to live up to his expectations. That he’s 22 and wasting his life away seems to escape him. Thrown into the deep end on the island, he has to grow up fast, and the twelve episodes in which he fights for survival also turns out to be the growing experience that he obviously missed out on. Himiko too is a gamer, although more of a casual one. But her life experiences were such that she sought the online world as an escape from abusive relationships. At least online her love life could be pure. And she’s thrust into the game, untrusting of others, and especially untrusting of men, made even worse as the first few men that she encounters on the island live down to her expectations. Circumstances put Ryouta and Himiko together, and they have to decide to work as a team to escape the game. For Ryouta that means a whole lot of growing up to do, and for Himiko it means learning to trust again. It’s not an easy process for either of them, and the way the story unfolds in the anime makes it very compelling to watch. 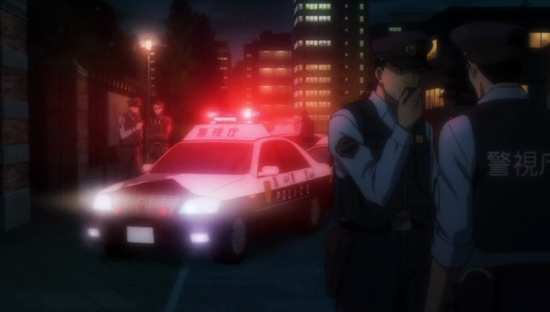 While the story doesn’t end in this series, leaving on a cliff-hanger that surely invites a second series, it does at least bring an important arc in Ryouta and Himiko’s relationship to a conclusion, and in that way at least, watching this series of Btooom! is a satisfying experience. Will you look at that! I didn’t even want to watch this show, and already I want there to be a second series. In terms of story, in terms of character, in terms of action and in terms of animation, Btooom! is a very well put together show. The quality shines throughout, and objectively at least I can say that this show is well worth watching. I didn’t want to watch it at this time, but I can’t pick and choose when to review a check disc. But I can tell you that when I am in the mood for a little survival death match action, I will indeed look forward to watching Btooom! again. 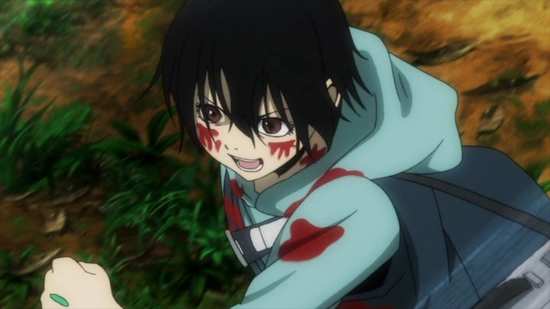 And for this second viewing, I certainly didn’t have any reluctance to watch the show, with the Blu-ray a worthy upgrade for the animation. Perhaps not visually as you might have expected, with the hazy, soft feel to the visuals not particularly suited to an HD upgrade, but certainly when it comes to the audio, as the native film rate resolves the pitch correction of the DVD’s PAL transfer, and it sorts out the problem with the dialogue balance on those discs. One thing is even more apparent this second time around. I want them to finish animating the story.