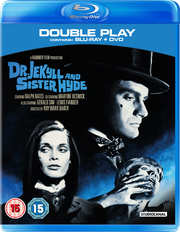 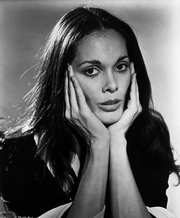 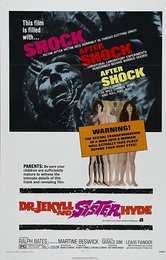 DVD
Sherlock Holmes - And The Leading Lady/Incident At Victoria Falls 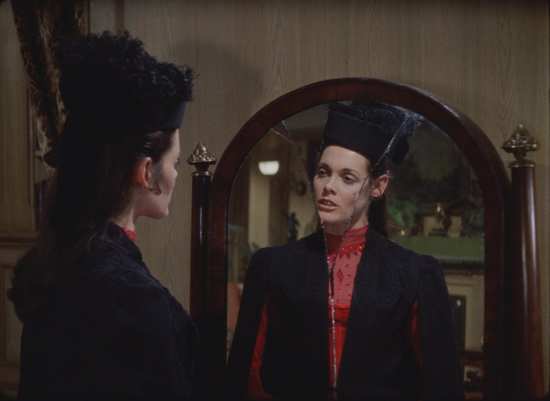 It’s fantastic that Studiocanal are finally getting around to re-mastering some of the Hammer releases in HD. After issuing the more obvious , top-notch classics, it seems that they are now focusing their efforts on some of the later, tier-two films, often produced as one part of a double-bill. ‘Dr. Jekyll and Sister Hyde’, whilst in this category, and by its nature nudging the sexploitation end of the Hammer spectrum, is a surprisingly good film and this edition is absolutely first-class. 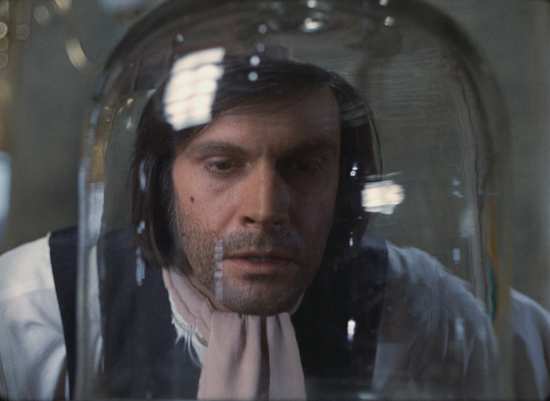 Set in Victorian London, Professor Jekyll (Ralph Bates), an earnest scientist, obsessively works day and night haunted by the fear that one lifetime will not be enough to complete his research. Side-tracked from his objective he becomes consumed with developing an immortality serum. He tries the serum out on a fly which, despite changing sex, lives way beyond its usual lifespan. 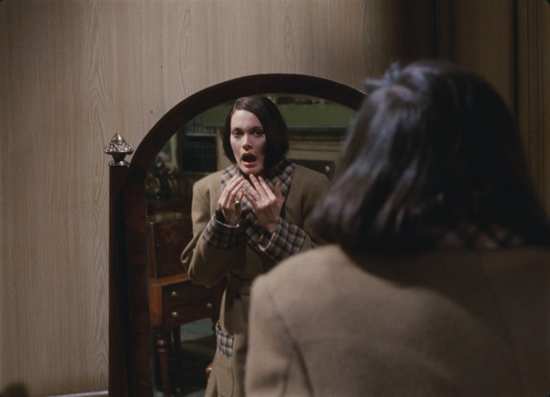 Once convinced his findings are complete, he consumes the potion only to discover that he is to become two as he turns into half Jekyll and half Hyde. Desperate to cover up his newfound identity he calls her his sister, but things take a turn for the worse when he realises that he needs female hormones if he is to maintain his existence. Before long he is battling with his alter ego Mrs Hyde (Beswick), as a number of young girls begin to go missing in the streets of London… 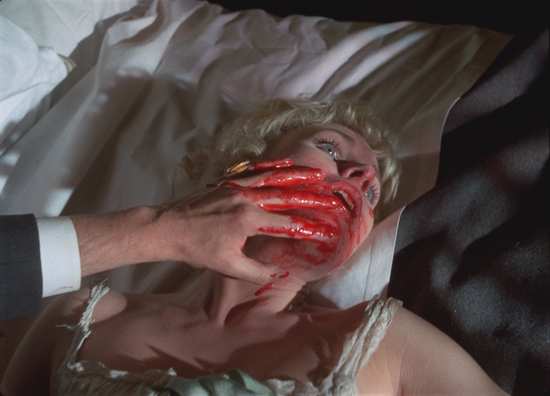 Penned by the marvellous Brian Clemens (The Avengers, The Persuaders, The Champions, Thriller) and directed by Roy Ward Baker (The Avengers, The Baron, Department S, The Persuaders) who had just turned in two relative successes for Hammer with ‘The Vampire Lovers’ and ‘Scars of Dracula’, the pair were clearly having a ball when they pulled the concept for the film together, apocryphally over a few beers. Indeed, not only did they take the original story and bend that with a modern gender-bender angle, they decided to weave in a bit of ‘Jack the Ripper’ as well, pausing just long enough to also introduce notorious real-life grave-robbers, Burke and Hare into proceedings too. 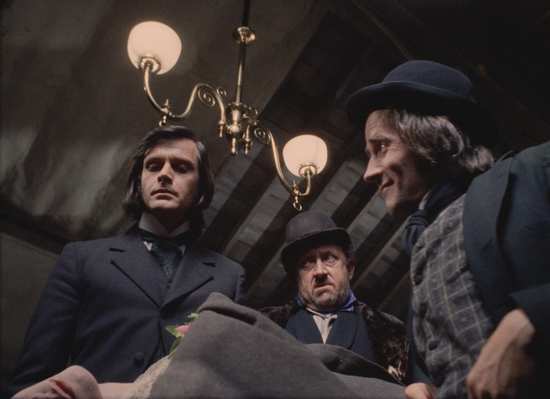 Apparently, the idea had barely been penned when Hammer produced a publicity poster mock-up – enough to convince the backers that it was worth getting on with.

Ralph Bates (who I still see as the down-trodden hero of the melancholy sit-com featuring a recent divorcee, ‘Dear John’) is really on top form here – not quite outshining his career best in ‘Horror of Frankenstein’ but giving it a pretty decent run for its money. He has oodles of dark charisma and really looks the part too. 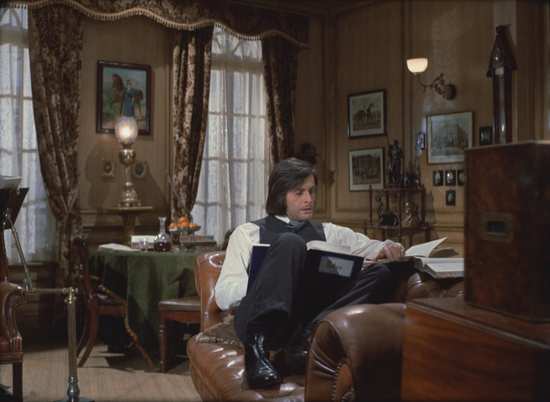 Actress Martine Beswick is equally well-cast, looking spookily like Bates in female form without really trying. She does a superb job as the simmering baddie, manipulating those around her to her own ends.

Of course, it’s not always easy to keep a straight face as Jekyll transforms, much to the dismay of a young lady living with her parents in the lavish apartment above his, though her brother is rather taken with Ms. Hyde, adding a peculiar twist to a ménage di trois. You just know it’s going to end badly. 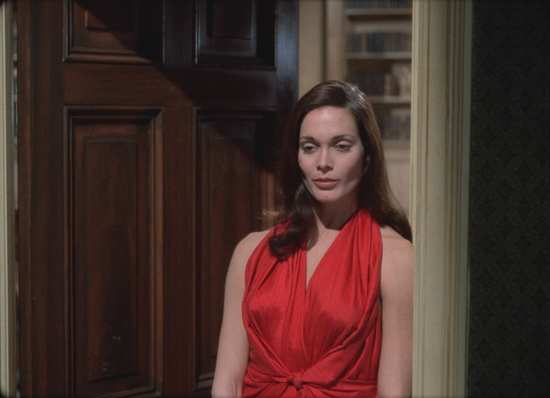 The film is moderately risqué, as Hammers were tending to be by this time with a couple of somewhat titillating scenes which show Beswick briefly topless, as well as a brief glimpse of a nude corpse laid out in the mortuary, with the attendant more than intimating his enjoyment of necrophilia, which he considers a perk of the job.

But mostly it’s Hammer at its best with fantastic Victorian set-pieces with lavish interior sets and moody, foggy London streets full of period costumes, blind beggars and ladies of the night. 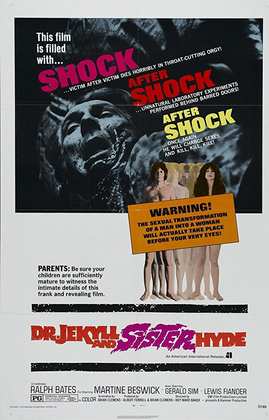 The Blu-Ray transfer is outstanding – surprisingly good and a real visual treat, showing the film at its very best, and presented in its original 1.66:1 aspect ratio. The audio is excellent too, presented as a 24-bit DTS-HD Master 2.0. Hammer stalwart David Whitaker’s score (Scream and Scream Again, Vampire Circus) is excellent too, perfectly enhancing the atmosphere.

The disc houses a single extra feature, a short 11-minute interview-based ‘featurette’, ‘Ladykiller: Inside Dr Jekyll & Sister Hyde’ which was made exclusively for this release. It features ever-present Jonathan Rigby (author of English Gothic), Kevin Lyons (BFI), Alan Barnes (author of The Hammer Story: The Authorised History of Hammer Films) who discuss the film’s history, its production and their views on it. All seem very knowledgeable and agreeable chaps, so well worth a watch. 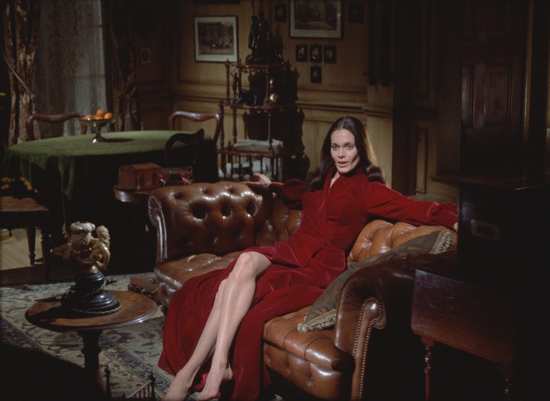 ‘Dr. Jekyll and Sister Hyde’ may not be anyone’s all-time favourite horror film but it’s thoroughly enjoyable, nonetheless. In fact, it’s surprisingly good given its potentially prurient content. This edition, with a really excellent high definition transfer of the film, is clearly the way to give it a watch. Not only that, I think, like so many Hammer films, that it will bear repeated views. Well worth picking up.