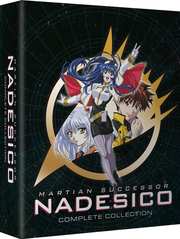 Synopsis:
The Earth, its moon and its Martian colonies are under alien attack, but the war against the “Jovian lizards” has, so far, been nothing short of a series of disasters.

Disgusted by the incompetence of Earth’s military, the independent arms manufacturer Nergal builds its own space battleship and plans to launch a desperate offensive to save humanity. But due to a shortage of trained soldiers, they’ve assembled the most unorthodox crew to ever launch into orbit! With a pacifist cook-turned-unwilling mecha pilot and a ditsy admiral’s daughter in command, can this unprecedented gathering of geeks, misfits and anime fans prevail against the Jovian menace?

Contains the full TV series (26 episodes) and the film “Prince of Darkness” on Blu-Ray and with both the English dub and the original Japanese track with English subtitles.

Also included is a DVD full of extras including the Gekiganger 3 OVA, all presented in Collector's packaging, and also includes 9 art cards and stickers.