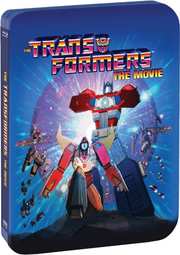 DVD
Transformers: The Movie (US)

Fans of The Transformers are going to love this release. You’ve got the original film (not the Michael Bay nonsense), and it’s been restored and re-mastered, with a 4k scan, colour corrected to match the animators’ original intent. And it’s a release that is jam packed with extra features, collecting those from the 20th Anniversary release, and adding some more newly created for this 30th Anniversary Blu-ray. If you’re like me, The Transformers movie might give you a headache about original aspect ratio. It was a theatrical release; the way most fans first saw it was in 1.85:1 widescreen, and you’d think that would be the original ratio. But the movie was actually animated in the 4:3 frame, and the image cropped from that for its theatrical presentation. You actually get more image information that way. Not to worry though, as this Blu-ray release comes on 2 discs, the widescreen version and the full frame version. Like I said, Transformers fans are going to love this!

I am not a Transformers fan, which begs the question as to why I’m reviewing this movie, which I admit up front that I’ve never seen before (don’t expect a compare and contrast with earlier releases). You see, I was a Transformers fan at first. I loved cartoon shows as a kid, and the idea of transforming robots, disguised in plain sight was intriguing, while the story that built up around the Decepticons and Autobots was entertaining. I’ve facetiously said in the past that the reason I fell out of love with the show was because of a disappointing Christmas present. I asked for a Transformer and I got a Zoid instead. But the real reason is that the show practically changed overnight and by the time I figured out why, it was too late.

The first couple of series of Transformers were great, and I loved the characters, Optimus Prime, Megatron, Starscream, Soundwave, Jazz, Ironhide, and Bumblebee. They were the toys that everyone (except me) played with, and they were the larger than life characters that filled the screen. And then in 1986, the new series started, and the characters were gone. All of a sudden it was Rodimus Prime and Galvatron? Remember this was the mid-eighties when UK cinema was in a slump, and movies tended to come here after a six-month delay. By the time I’d learned that the feature film had actually culled the original characters (Hasbro had a whole new line of toys to sell), I’d outgrown those kids cartoons and had long since left the Transformers behind. That is why I’m reviewing the movie now, thirty years later. I want to know what happened to my favourite characters. 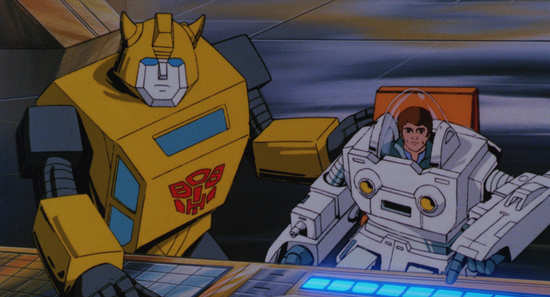 Twenty years have passed, and it’s now the distant future of 2005. Spike’s grown up and has a son of his own, while the Decepticons now control Cybertron. The Autobots plan to strike back though, with the help from Autobot City on Earth. Optimus Prime and his troops stand poised on Cybertron’s moons, but the forces of Megatron and his Decepticons are one step ahead. Not that it matters, as the ominous world of Unicron is on the move. The living planet exists by devouring machine worlds, and its next target is Cybertron itself. But Unicron has realised that the only force in the universe that is a threat to it is the Autobot Matrix of Power, carried by the Autobot leader, Optimus Prime. Unicron needs that Matrix destroyed, and picks Megatron to do its bidding. Of course Megatron will have to be ‘upgraded’ first to ensure his loyalty.

I wanted the full (home) cinema experience with Transformers The Movie, watching it almost the same way fans would have back in 1986. The widescreen disc gets a 1.85:1 widescreen 1080p transfer, and I have to say that the film looks very sound indeed. It’s clear, it’s sharp, it’s rich with detail, and the colour palette is strong and consistent throughout. It looks properly filmic, with an even level of film grain, and contrast and black levels are excellent. It is a film that looks its age though, certainly in the style of animation, the slight wobble of the film, and one or two rare flecks of dirt on the print. I may not be able to offer a compare and contrast between this version and the old, but there’s a nice restoration featurette in the extras that does that for you, if you want to know just how much of an improvement it is (a lot).

I sampled the commentary from the full frame disc, and the 1.33:1 pillarboxed transfer is identical in quality to the widescreen disc, but really opens up the frame and adds much more in the way of picture information. It also helps with a couple of cramped compositions in the widescreen version. Of course it’s more of a television experience than a cinematic one. 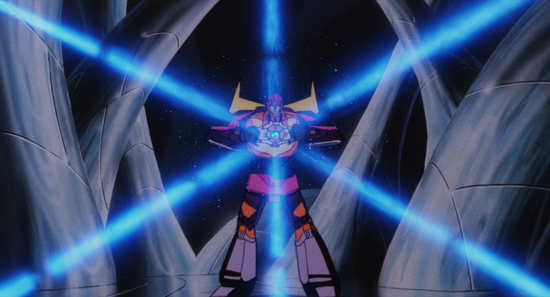 You have the choice between DTS-HD MA 5.1 Surround, and 2.0 Stereo English with optional English and Spanish subtitles. I went with the surround track, and after an inauspicious start (some really muddy dialogue in the pre-credits sequence), things really came to life with that rocked out version of the theme song. Following that, the dialogue has the impact and clarity that you would hope for, although some of the stereo placement of the voices doesn’t always match up with screen position of characters. The dialogue is clear through, the action comes across well, and the surround offers a little ambience, and a little more in the way of placement of effects. And the music doesn’t let up at all for the 84 minutes of this movie, and there is a whole lot of 80s hair rock to contend with/enjoy. As for LFE, just listen to Unicron!

It seems that Manga Entertainment have merely repurposed the Shout Factory release from earlier this year for their own discs, putting the Manga Entertainment logo front and centre. The discs boot to the same animated menu, and the extras are repeated across both discs. The only difference is the aspect ratio of the main feature.

New for this release is the following.

‘Til All Are One – Retrospective Documentary, which lasts 46:43, and where select members of the cast and crew speak.

Transformers: The Restoration lasts 7:16, and shows just how the 4k restoration was accomplished, taking us through the process from beginning to end, and offering a side by side comparison.

Rolling Out the New Cover lasts 4:49 and shows how the US cover of the 30th Anniversary release came about.

All of the latter are in native HD.

It had to happen, didn’t it? Somewhere in the last thirty years, the last thing that I wanted took place. I grew up... I ‘grumpy old man-ed’ my way through the film last night, actually thankful that it was just a mere 84 minutes long, and I wound up enjoying the commentary and the featurettes a lot more than the film itself. As I said at the beginning, if you are a fan of The Transformers, if you are a nostalgia hound then you are going to love this disc. It presents The Transformers movie with an audio visual quality that you have never seen before, and it will be pure catnip for fans of the franchise. And to be honest, I liked it more than the Michael Bay movies. 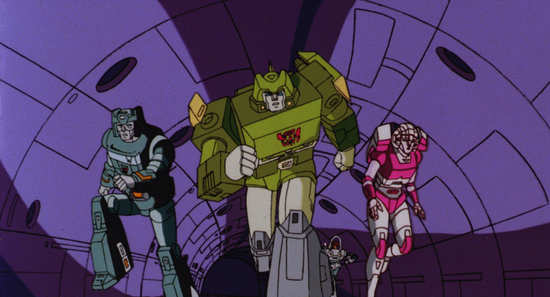 As for finding out what happens to my favourite characters, it was by parts enlightening and disappointing. Certainly the fates of Optimus Prime, Megatron, and Starscream were worthy of the characters, but when it came to the rest of the heroic Autobots, they sure went out like bitches. After all 84 minutes isn’t really a long time to introduce a new toy line, and you have to clear the decks pretty quickly to get the appropriate character development in for newcomers like Galvatron and Hotrod.

The Transformers movie is nonstop action from beginning to end, relentless battles, all punctuated by that rock soundtrack, but it is very much a kids’ cartoon writ large, despite the character deaths. It feels like a series of adventures heading towards a climax, instead of the traditional three act structure, and you can very well see this edited down into 20 minute chunks to run on TV. Having said that, the animation is far richer and more detailed than the average 80s TV show, the use of light and shade, the increased character detail certainly makes it a fascinating watch, while some of the more artful sequences are positively psychedelic at times.

If I had maintained my interest and passion for these characters, I might have enjoyed this film. But not having watched Transformers for enjoyment since the eighties, I found that I couldn’t rekindle the same nostalgia that I have done for other older shows of the same period. Despite its stellar voice cast (Orson Welles, Leonard Nimoy, Robert Stack, Judd Nelson) it doesn’t really work as a feature film. It’s too loud, it’s too relentless, it promotes spectacle over character and story arcs (sounds like a Michael Bay movie, indeed I did spot some similarities to Armageddon), and it’s ultimately unsatisfying as a feature film. And I sound like an old man again. I wish I could go back in time and show it to the twelve year old me, as I’m sure he would have enjoyed it more than I.