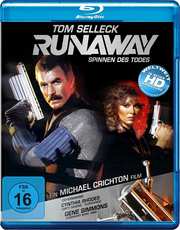 It Is The Future. Machines are being programmed to turn against us. Someone must stop the madman who started it all.
Certificate: 16
Running Time: 100 mins
Retail Price: €14.99
Release Date: 2015
Content Type: Movie

Synopsis:
A police sergeant goes up against an evil electronics whiz in this fast-paced, futuristic thriller.

Ramsey is a widowed cop trying to raise his young son, Bobby. Although he suffers from a fear of heights, this condition hasn't stopped him from becoming one of the best officers on the force. His specialty is tracking down robots that have gone bad, rebelling against their owners. And because machines have taken over many regular tasks -- even cooking -- in this futuristic society, there's always a need for Ramsey's services. Now, however, he has his toughest assignment yet.

Luther, a master criminal, is terrorizing the city by controlling robots everywhere to do his bidding. And, with the help of new, diabolical creations that include electronic spiders and heat-seeking, programmable bullets, Luther seems unstoppable.

Will Ramsey and Thompson, his new, female partner, be able to stop the villain?

Director of Photography:
John A. Alonzo