Blu-ray
My Stepmother is an Alien
Related Articles

The Adventures of Buckaroo Banzai Across the 8th Dimension 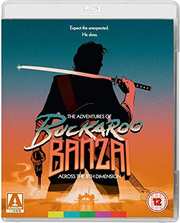 Synopsis:
YOUR ONLY HOPE IS BUCKAROO BANZAI

From the writer of Invasion of the Body Snatchers and Big Trouble in Little China comes a pop-sci-fi adventure that defies convention and went on to become one of the cult hits of the 80s.

Peter Weller is Buckaroo Banzai, a physicist-neurosurgeon-martial arts master-secret agent-rock star who has just made history with his invention, the Oscillation Overthruster. The Overthruster allows him to travel to the 8th Dimension, but this feat draws the attention of the Red Lectroids, an alien race (led by Christopher Lloyd) who have teamed up with Banzai s nemesis, the deranged Dr Lizardo (John Lithgow). Lizardo and the Red Lectroids are seeking the Overthruster to take over the world and Banzai, with his team of agents/band musicians, The Hong Kong Cavaliers, must stop them before it s too late!

With strong references to sci-fi and pop culture that span Thomas Pynchon and Orson Welles, Buckaroo Banzai is a film made by fans for fans and counts filmmakers including Wes Anderson and Kevin Smith among its admirers.