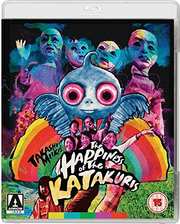 The Happiness of the Katakuris (Blu-ray Details) 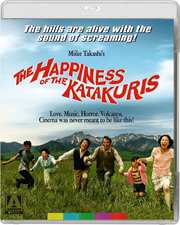 Review for The Happiness of the Katakuris

It’s hard to believe now that it’s been 10 years since I reviewed The Quiet Family. It was one of the first Korean films that I watched, a result of the lucky dip review system the site operated back then. I had no idea what to expect, but the quirky dark comedy really made a big impression on me, and to this date, it remains one of my favourite Korean movies. It was actually made back in 1998, and reading up around it for the review, I quickly learned that there had been a Japanese remake in 2001, The Happiness of the Katakuris. Back then I dismissed it out of hand, equating it to the US remakes of foreign films that never live up to the originals. But back then, I had no idea who Takashi Miike was. Since then, I’ve seen a handful of Miike films, 13 Assassins, the Crows Zero movies, For Love’s Sake, Lesson of Evil and Yatterman. If there is one thing I’ve learned. It’s that Miike’s films are eclectic, he dabbles in all genres, and he always brings something unexpected to his films. So when Arrow Films announced that The Happiness of the Katakuris would get a Blu-ray upgrade, this time I didn’t hesitate, tantalised by what Takashi Miike would remake of the Quiet Family. 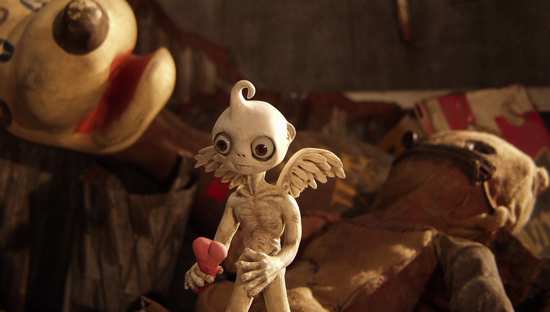 Masao Katakuri had a long career in a shoe company, until he got laid off. So he upped sticks, and with his whole family moved to the mountains, and bought an isolated guesthouse which he decided to renovate and run. So he and his wife Terue, children Shizue and Masayuki, granddaughter Yurie, and his father Jinpei now work full time at a guesthouse that no one frequents. Not to worry, as the prospect of a new road being built near their location offers the promise of many more visitors. But when one stormy night, they get their first guest, their enthusiastic welcome is premature. This guest is there only to check in. Masao knows that if word of their first guest committing suicide gets out, the guesthouse’ reputation would be permanently tarnished. So rather than report the death, they decide to bury the body and clean up the evidence. That’s just the start of a slippery slope.

This is a dual format release, but I only got the Blu-ray check disc for review. 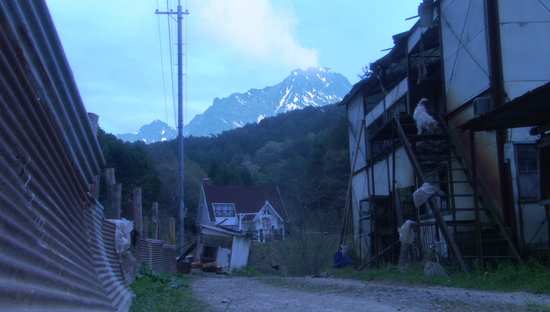 The Happiness of the Katakuris gets a 1.78:1 widescreen transfer at 1080p resolution. In the Tom Mes commentary, you learn that the film was shot digitally, and that does show in the look of the film. The advantage is of course that the Blu-ray offers a faithful recreation of the original source image, pixel perfect for want of a better phrase. The image is clear and sharp throughout, colours are strong, and detail levels are certainly far more than you might expect from a DVD. But it is a soft image at times, brightness levels pushed high so that whites appear blown, colours extra-vivid, while black levels are poor, tending towards the grey. There is also a smidge of digital banding at times, particularly in one moonlit scene. It’s more than watchable though. 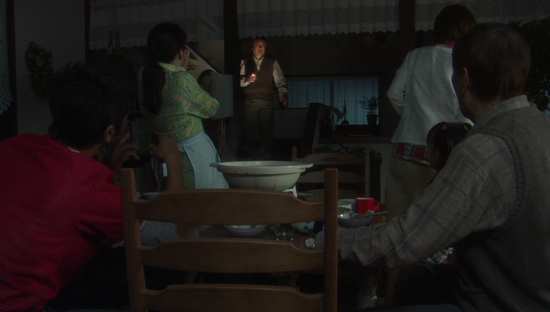 The sole audio track here is a PCM 2.0 Stereo Japanese track with optional subtitles. It’s a very effective stereo track which might be front-focussed, broadened out a tad with a bit of Prologic help, but the soundscape is designed well, offering discrete placement of effects, keeping the dialogue clear, and bringing across the songs in a rich and vibrant manner. 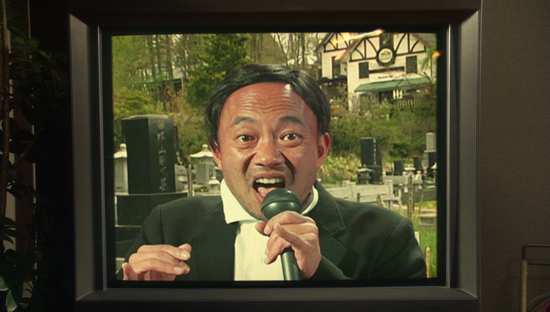 The Happiness of the Katakuris presents its content with an animated menu. Unfortunately for the purposes of this review, I lacked the time to take in the extra features as I usually do, so this is more a listing than an opinion.

There are two, or rather three audio commentaries on this disc.

The Audio Commentary from Director Takashi Miike and actor Tokitoshi Shiota is a light hearted, informal commentary that is presented in the original Japanese with English subtitles. However, in an option I’m seeing for the first time, there is an English translation of this commentary spoken, I assume by actors. It’s very useful if you’re one of those people that like to have commentaries on in the background.

There is also a commentary from Tom Mes on this film. Tom Mes is to Japanese cinema as Bey Logan is to Hong Kong cinema, so expect a detailed and dense commentary, rich with information. Add to that, Tom Mes has a particular interest in the works of Takashi Miike, so you can expect even more from this track. I’m desperately searching for the two hours free in my calendar to devote to this commentary. 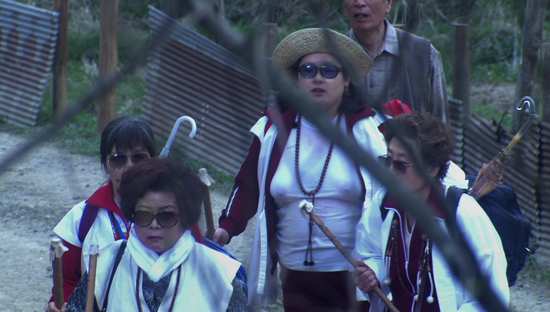 The Making of the Katakuris is a contemporary featurette which offers the usual mix of cast and crew interviews, and behind the scenes footage. This lasts 30:42.

There are several interviews on this disc; most interesting is a 38:59 interview with Takashi Miike recorded in March 2015, as he looks back at this film and the effect it has had on his career since. The rest of the interviews are contemporaneous with the film, and include Takashi Miike (5:03), Kenji Sawada (5:00), Keiko Matsuzaka (2:48), Kiyoshiro Imawano and Shinji Takeda (4:28), Naomi Nishida (2:19), and Tetsuro Tanba (4:04).

Animating the Katakuris lasts 5:30 and offers a claymation artist at work.

Dogs, Pimps and Agitators is another new featurette for this disc, with Tom Mes narrating a visual essay on Takashi Miike’s career. Given his prolific output, this is more a look at overall themes and influences than a film by film breakdown. 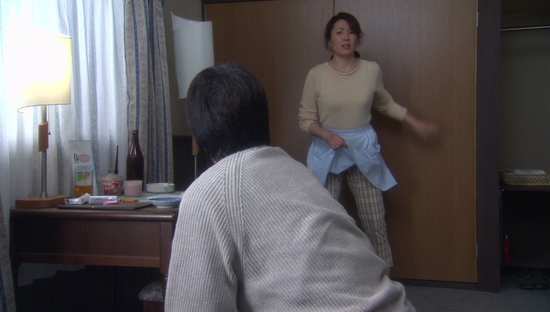 All of the extras created for this disc are presented in 1080p HD. Everything older is up-scaled from an SD source and presented in 1080i 60Hz (for HD subtitles) except for the trailers which are in 1080p.

One issue with the extra features is that this is one of those discs that can’t display text captions and dialogue subtitles simultaneously. This isn’t a problem in the film, but in the extras, it will often happen that a screen caption is translated on screen, while an interviewee is speaking, and once the caption disappears, the subtitles have to race to catch up with what was being said. Sometimes I had the feeling that some translations were left out.

There is also a booklet with the film, offering three essays on the film including a comparison with The Quiet Family, as well as an interview with Takashi Miike. 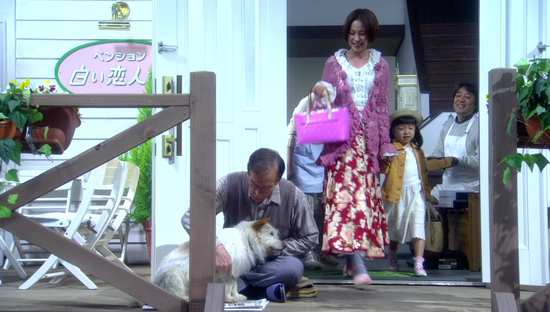 The Quiet Family was a wonderfully dark comedy, somewhat understated, occasionally dramatic, occasionally surreal, but very much a dark comedy. I needn’t have worried about Takashi Miike’s remake merely aping the original, although if you read that synopsis at the start of the review, you’d be forgiven for thinking it was the exact same film. Takashi Miike takes The Quiet Family as his starting point, and turns the surrealism up to eleven, makes it bright, loud, colourful and brash. This Katakuri family sure ain’t quiet. And of course he makes it a full blown musical! With dancing zombies! 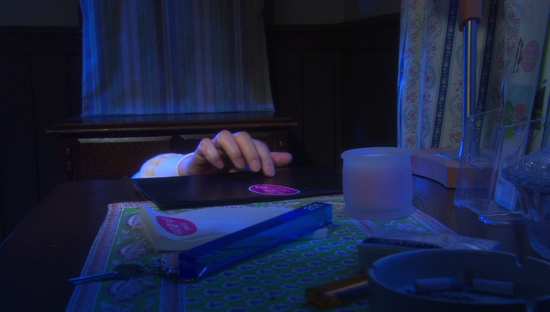 You know you’re in for something different when the film starts with a Claymation sequence depicting a bizarre food chain beginning with a woman’s uvula and a sprite, and ending with great-grandpa Katakuri knocking a crow out of the sky with a cord of wood. Yurie introduces her big, happy family as she is apparently digging a grave for some unseen pet. The Katakuris are hard at work running a guesthouse that no-one frequents, and while Masao and Terue are happily in love, happy to work, their children are a little more reluctant. Shizue, Yurie’s mother has bad luck with men, is a single mother, but is always looking for the next mister right. Her brother Masayuki is more of a delinquent, thinks the guesthouse is a daft idea, but given his criminal past, hasn’t got a lot else in the way of options. 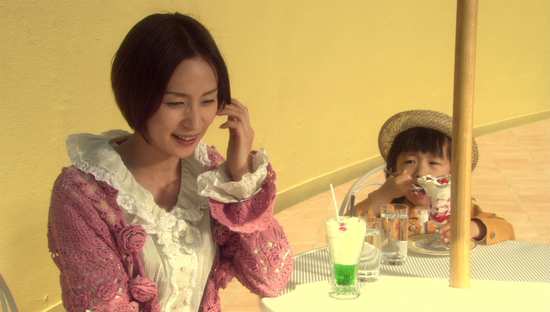 It’s similar to the Quiet Family in what happens when the guests start coming in, and wind up dead, although the means of dispatch may be somewhat different. While the initial guest’s suicide is familiar, the passing of the sumo and his underage girlfriend is somewhat more, colourful. Guests die, the family try to cover it up, that much is the same, although the bursting into song with full orchestral or rock accompaniment is different. But then Shizue falls in love, with a foreign born Japanese US, no, UK navy sailor, who’s actually a secret agent, related to the British royal family. You can tell that this isn’t going to end well. 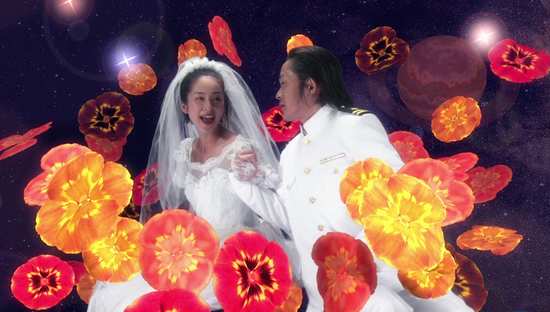 What was a dark comedy in the original Korean film becomes something of a lyrical observation on life and death in the hands of Miike, but just as with the ‘secret agent’ subplot, it insists on taking hard right turns that gave me whiplash. It’s visually arresting, the direction, and the sheer Technicolor profusion can be breathtaking, the flights of fancy are sublime (it will drop to Claymation for its grand action sequences), and the musical numbers are catchy and energetically staged. And I haven’t the slightest idea of what make of the film. It’s not that The Happiness of the Katakuris is a film in search of an identity. On the contrary, it knows exactly what it wants to be. The onus is on the viewer to try and keep up with its twists and turns and try and figure it out. 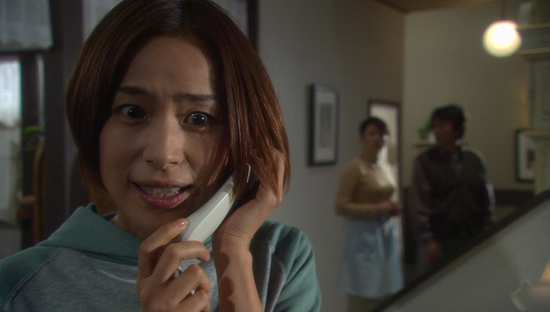 So one viewing is hardly enough to decide whether I like this film or not. I can tell you that I do think The Quiet Family is the better film, or at least more approachable. That The Happiness of the Katakuris has already convinced me to watch it again however, makes it a worthwhile investment in that respect. The Blu-ray offers great video and audio quality as you would expect, but it also delivers in terms of extra features.