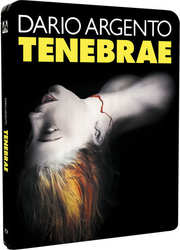 Collectors rejoice for horror legend Dario Argento's classic Tenebrae is coming to Blu-ray as a limited edition steelbook on 16th December, just in time for a blood filled Christmas!

Presented in its original 1.85:1 aspect ratio with PCM 2.0 Mono soundtrack in English and Italian with English subtitles, this newly remastered 1080p transfer is joined by two commentary tracks, one with authors and critics Kim Newman and Alan Jones, and the other with Argento expert Thomas Rostock.

And the recommended retail price for all this red liquid filled loveliness? A mere £24.99.

A razor-wielding psycho is stalking the horror writer Peter Neal, in Rome to promote his latest work, Tenebre. But the author isn’t the obsessive killer’s only target, the beautiful women who surround him are doomed as one by one, they fall victim to the murderer’s slashing blade.

Will fiction and reality blur as fear and madness take hold? Watch in terror as by turns the cast fall victim to the sadistic imagination of Dario Argento, Italy’s master of horror.