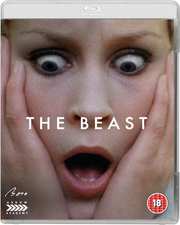 Can I start with an apology? I pressed the play button on my Blu-Ray player fairly late last night to watch ‘The Beast’ (La Bête, 1975) for the first time. Its reputation as a banned film in the UK preceded it and unsure quite what to expect it seemed politic to watch this when everyone else in the house had decided to call it a day. Still – it was made in 1975 when even a flash of a breast was enough to earn a film an X-rating, so how bad could this be? So why the apology? Well, I clearly must have fallen asleep. There can be no other explanation for what unfolded with a narrative that makes ‘Blue Velvet’ and ‘The Naked Lunch’ seem positively cohesive. Please tell me I was dreaming.

‘The Beast’ is actually a spin-off from a segment cut out of Borowczyk’s previous film, ‘Immoral Tales’, which has been built up into a single full length feature. In the original version (which can be seen on the Arrow release) ‘The Beast' focused on just the rape scene which forms the (cough) climax of this version and which could be seen as a kind of Werewolf take on Beauty and the Beast.

Lucy Broadhurst (Lisbeth Hummel) is due to inherit a substantial fortune, but on condition that she marries the son of her late father s best friend. But Mathurin de l Espérance (Pierre Benedetti) seems more interested in his horses than in his bride-to-be, and when Lucy finds out about the story of his 18th-century ancestor Romilda (Sirpa Lane) and brings her to life in one of the most outrageous dream sequences in cinema history, we begin to realise just how bizarre Mathurin s bloodline truly is.

It’s full of explicit sex and opens with two horses mating in quite off-putting close-up detail. It arguably touches on the underlying sexual themes of horror movies and I guess fairy-tales too by showing that the intended end-result of a chase through the forest may not be to eat the victim, but rather to rape her. But Borowczyk skews even the simplicity of this by introducing some doubt as to whether the victim is traumatised or turned on by the whole grotesque event, taking place explicitly with a giant beast’s phallus showering sperm like a fire-hose throughout. It really isn't comfortable viewing and if the thought of watching this makes you wriggle with discomfort then maybe this is not for you.

During her short stay, Lucy has a dream which is the basis for the notorious rape scene. Having spotted pornographic images around the house (even hidden in the frames of paintings) it doesn’t seem too strange that she appears to be sex-obsessed. Getting to it though is a bit ponderous and there are moments when the film seems to drag with plenty of dinner table conversations slightly loaded with dark intent but never quite sparkling enough to propel the thing on.

When you finally get to the rape scene and are face to face with the beast (a cross between a cuddly bear and a werewolf with huge claws and a giant erect phallus) it’s pretty shocking stuff, even more so given the fact that it’s fairly relentless running to some ten minutes or more. There is nothing subtle about Borowczyk here – nothing is left to the imagination. In fact, he’d much rather treat you to his.

Whether the whole thing is art or pornography is, in my view, a completely false dichotomy. It’s both, just like the hanging scenes in Burroughs novels; the fantasy is clearly exciting to the auteur. I don’t know if the ‘she’s actually loving it’ view point would be deemed even remotely acceptable today, though I suspect that the uncompromising Borowczyk probably couldn't care less.

The special effects – and the beasts face in particular – do look rather comical by today’ standards, though knowing that this is just a costume filled with a real person doesn’t dilute its impact particularly in my view. It remains a complete one-off, as crazy as Lynch’s ‘Eraserhead’ and twice as controversial.

The Blu-ray release boasts a very good and pristine high-definition transfer, I assume the best you’re ever likely to see it. It’s uncut (previous releases had up to six minutes removed by the BBFC) and comes with a host of fascinating extras. Forming part of an extensive Borowczyk set of releases by Arrow (all packaged with an extra disc in a superb ‘Boro’ box set with an excellent 250 page booklet for those lucky enough to have bagged one of the 2000 released), ‘The Beast’ forms an important part of the story of his transition from abstract animator to pornographer, eventually directing films as inane as ‘Emmanuelle 5’.

■Introduction by film critic Peter Bradshaw
■The True Story of the Beast of Gévaudan (1972), the original short-film version of The Beast
■Venus on the Half-Shell (1975) – a series of erotic drawings and paintings as described above.
■The Making of The Beast : camera operator Noël Véry provides a commentary on footage shot during the film s production
■Frenzy of Ecstasy, a new visual essay on the evolution of Borowczyk s beast and the sequel that never was, Motherhood
■Theatrical trailer
■Reversible sleeve featuring original poster design
■Booklet featuring new writing on the film by Daniel Bird and archive pieces by David Thompson and Craig Lapper, illustrated with original stills

I am unsure whether I would fully recommend seeing 'The Beast'. It's certainly one of the strangest and most extreme films I have ever seen; slightly comical in some respects and utterly grotseque in others. It's not for the light-hearted.

However, I fully support the BBFC for allowing its release in full and applaud Argos films (and distributor Arrow) for turning it into such a handsome edition, both in terms of transfer and extras.