New: £9.71
Suffering Of Ninko
Not available 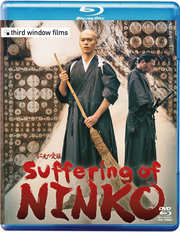 Synopsis:
The young monk Ninko leads an ascetic existence in the Enmeiji temple, but his dedication to a life of simplicity and sexual abstinence is made impossible by the curse that seems to afflict him: he is irresistible to every woman (and some of the men) he meets. Pursued by a posse of half-naked, crazed women and a mysterious, faceless nymph, he flees high into the mountains, where he can finally discover his true nature.