Supernatural horror The Haunting in Connecticut 2: Ghosts of Georgia creeps onto DVD and Blu-ray in March 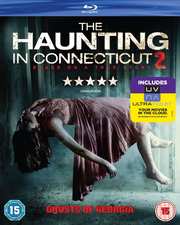 A spooky release for 3rd March to bring you news of, with an extremely long name for such a title which may be a good or a bad thing, we aren't sure. Arriving courtesy of Lionsgate Home Entertainment on both DVD and Blu-ray is the directorial debut of Tom Elkins, supernatural horror The Haunting in Connecticut 2: Ghosts of Georgia.

Starring Abigail Spencer, Chad Michael Murray, Katee Sackoff and Emily Alyn Lind, this is one of those allegedly true stories which obviously isn't because ghost don't exist type affairs, and has a runtime of 97 or 101 minutes, depending on which release you get due to the PAL speed up on the DVD, a 15 certificate, Seeing Ghosts featurette, outtakes and deleted scenes with optional commentary.

No official word on the cost of these discs, but expect recommended retail prices of around £12.99 for the standard definition release, and 15.99 for the high definition version.

Andy Wyrick and his wife, Lisa are over the moon when they find what seems to be the ideal location to bring up their young daughter Heidi, an old house situated deep in the woods of rural Georgia that used to be a staging post for escaping slaves on the underground railway.

But soon after the move, as Heidi begins to witness a number of disturbing supernatural events, the ghostly spirits of the house’s past return to unleash terror on the present owners.