DVD
The ABCs Of Death

The ABCs of Death 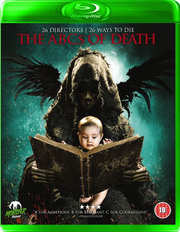 Synopsis:
The ABCs of Death is perhaps the most ambitious anthology film ever conceived with productions spanning fifteen countries and featuring segments directed by over two dozen of the world's leading talents in contemporary genre film, including the directors of House of the Devil, Hobo with a Shotgun, A Serbian Film, Tokyo Gore Police, You’re Next & four British Directors - Ben Wheatley (Sightseers), Simon Rumley (Red, White & Blue), Jake West (Doghouse) & Leeds based Lee Hardcastle, who with his claymation short, won a competition to be the final Director. Inspired by children’s educational books, the motion picture is comprised of twenty-six individual chapters; each helmed by a different director assigned a letter of the alphabet. The directors were then given free rein in choosing a word to create a story involving death. Provocative, shocking, funny and ultimately confrontational, The ABCs of Death is the definitive vision of modern horror diversity.

- A Is for Apocalypse - Oil Burns Visual Effects

- B Is for Bigfoot - Making of

- C Is for Cycle - Deleted Scenes

- D Is for Dogfight - Making of

- F Is for Fart - Behind the Scenes

- I Is for Ingrown - Making of

- J Is for Jidai-Geki - Behind the Scenes

- R Is for Removed - Behind the Scenes Photo Gallery

- T Is for Toilet - Behind the Scenes

- V Is for Vagitus - Deleted Scene, Behind the Scenes and Animatics.

- W Is for WTF! - Behind the Scenes, Bonus Flubs! and Star-Beast Outtakes

- Z Is for Zetsumetsu (Extinction) - Behind the Scenes

- AXS TV: A Look at The ABCs of Death

- Do You Know Your ABCs Trailer