DVD
The ABCs Of Death 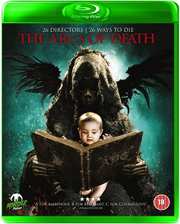 Compilation movies, or anthology films if you prefer, seem to be making a bit of a comeback recently. For those who are reading this blank faced, that means a collection of short related films compiled into one big one.

Eureka Entertainment are releasing The ABCs of Death on their Monster Pictures label, which is two hours of horror related material spread across 26 individual shorts by directors from all around the world.

The recommended retail price will be £13.99 for the DVD and £14.99 for the Blu-ray, whilst extras will include commentary tracks, visual effects featurettes, making-of featurettes, deleted scenes, behind-the-scenes featurettes, photo galleries, interviews with Simon Rumley and Milton Cam, animatics, bloopers, out-takes and trailers.

Adding a synopsis is going to be hard for this one, so instead we'll just list each of the shorts instead. Oh and add a trailer of course!