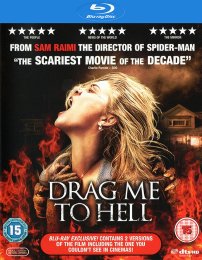 Drag Me To Hell (Blu-ray Details)

Drag Me To Hell

Sam Raimi has had a varied career, beginning with The Evil Dead and going on to make a western (The Quick and the Dead), comic book films (Darkman and the Spider-Man trilogy) and a crime thriller (A Simple Plan) but, with Drag Me To Hell, returned to the type of film with which he made his name. I loved this at the cinema and thought the DVD was very good but, to my eternal shame, boss the Blu-ray which has sat on my shelf still inside the shrinkwrap for nearly two months until I decided to watch it last night.

Christine Brown is an ambitious but mild mannered loan officer at the Wilshire Pacific bank where her boss, Mr Jacks, treats her like a doormat and dangles the possibility of the vacant assistant manager post to get the best work out of her. Christine has nearly landed a big loan from a new client but must compete with the new Stu for the post. Stu is an unscrupulously ruthless man who also treats her like dirt and is desperate for the promotion. 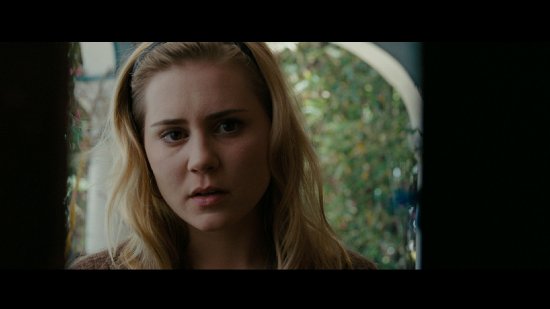 When an old Hungarian gypsy, Mrs. Ganush, comes to the bank and asks Christine for an extension on her loan so she can keep her house and send the bailiffs away, Christine is given a stark choice: follow her heart and grant the extension or be ruthless, decline the loan and endear her to Mr. Jacks. Choosing the latter, the disgusting gypsy gets on her knees and begs but Christine says there is nothing she can do and, claiming she has been shamed, Mrs. Ganush curses her, tearing apart from Christine's coat and saying some strange incantation before forcing it into her pocket.

Passing off the incident as a freak occurrence and a job hazard, Christine suddenly realises that the old woman means business when she attacks her in the parking lot and places the curse of the Lamia on her. Feeling a sudden desire to get her fortune read, Christine learns of the curse and that she will have three days of torment before her soul is taken to hell unless she gets the curse lifted. 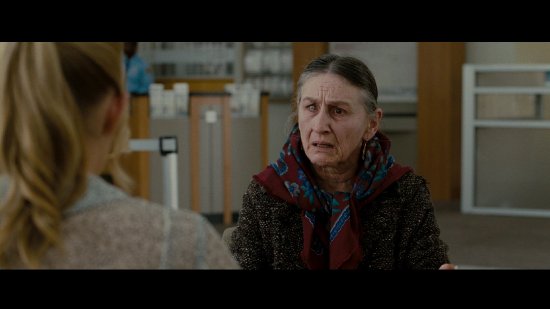 Suddenly Christine finds herself being attacked by an invisible force, stricken with horrible nightmares and haunted by Mrs. Ganush's spirit. Her boyfriend Clay, a psychology Professor, is extremely understanding but his wealthy parents are dismissive of his new girlfriend as she didn't come from money and was raised on a farm. With her life turned upside down, Christine finds herself in awkward social situations and eventually a battle for her eternal soul with an exorcist who has already faced the Lamia and failed.

This was probably the most fun I've had at the cinema for ages when it was released - it's the sort of film that makes you jump, squirm and almost feel nauseous due to the sublime mix of horror and gross-out comedy. It's a little like Evil Dead II in the inclusion of Looney Tunes-style comedic violence but Raimi can still ramp up the tension and deliver good shocks. By employing strange camera angles, quick cuts and outrageous make-up and prosthetics he really keeps you on your toes and there are some scenes where you laugh because of the sheer outrageous nature of the events on screen. 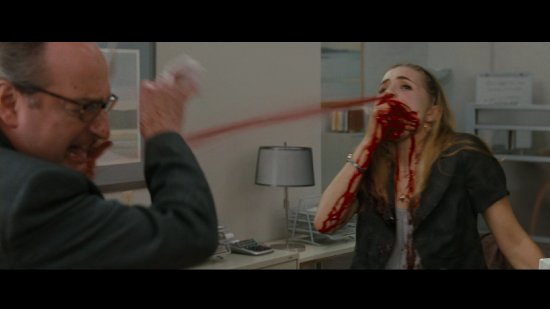 The casting is a curious blend of known faces and odd decisions with Alison Lohman as Christine (I last saw her in Matchstick Men playing a young girl), Justin Long moving away from comedy and sidekick roles to portray a psychology professor who is basically in the supporting girlfriend role and David Paymer as Christine's creepy boss. They are all very good with Lohman as both downtrodden and determined and Long surprisingly convincing. I'd never seen TV actress Lorna Raver before but she is amazing as Mrs. Ganush and the supporting cast also shines and there isn't really a weak link amongst the ensemble.

After the abysmal Spider-Man 3 I was wondering if Raimi had lost it but I needn't have worried as that seems to be a blip on an otherwise fine filmography. By returning to his roots, I guess he got out of the studio comfort zone and made a film that he wrote (with his brother Ivan) and produced by his own company, Ghost House Pictures (arguably their best film). I loved this from beginning to end and would, and will, happily watch it again. 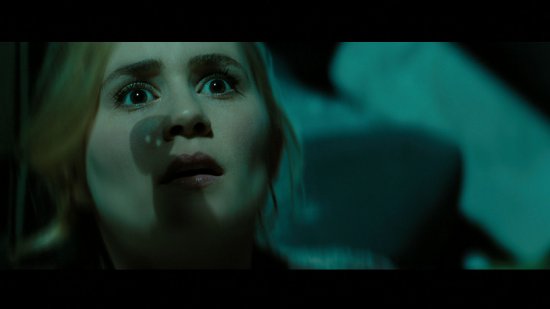 Extra Features
When you select 'Play Feature' on the menu, you are given the choice between the theatrical version and the unrated version. I can't honestly say that there is a great deal of difference between the two although the latter did seem to extend some of the more bloody and violent scenes, particularly the projectile nose bleed and when Christine fights Mrs. Ganush in the garage. This is a good addition as it's probably the version that Sam Raimi wanted to release but had to cut down, re-edit and change some colours in order to secure a PG-13 certificate in the US.

Production Diaries (33:42, SD) is introduced by Justin Long, who appears throughout the piece, introducing each section, and covers most aspects of the shoot in ten sections. The piece is a hybrid behind the scenes/making of and is entertaining and revealing with contributions from various members of the cast and crew including Howard Berger who talks about the special effects make-up.

There is an extra feature that is exclusive to the BD:
Interview with Sam Raimi, Alison Lohman and Justin Long (33:34, SD) these three people are interviewed separately with the Sam Raimi section is particularly interesting as he goes through the title, why he introduces comedy into horror films and the casting process. Rather amusingly, some of the set falls down during the interview causing the interviewer to go off on a tangent and talk to Sam Raimi about another film of his before going back on topic. Alison Lohman and Justin Long talk about their experiences on set, what they think of horror films and how they came to be involved in this film. The interviews are better than your standard EPK material and it is refreshing to actually hear someone asking questions than see them appear on screen as an intertitle as this allows the interview to flow more as a conversation than just a set of prepared questions put to the interviewees. As this is exclusive to the Blu-ray release it is a little odd that it is not in high definition. 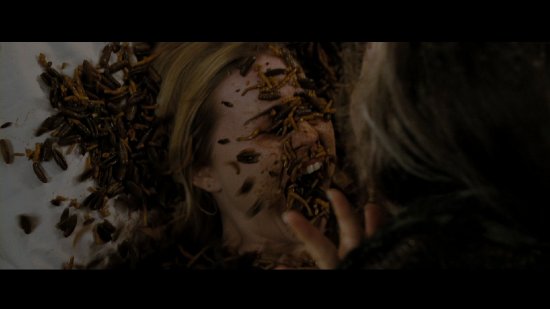 The Picture
I thought that this looked very good on DVD but it looks even better in high definition as the colours are more vibrant, contrast levels are deeper and the transfer is generally sharp. The effects are very well rendered with only a few green screen effects and a lot of visual effects using prosthetics and SFX make-up.

Raimi doesn't hold back on the gross out factor and there are scenes that will have people putting their hands over their mouths! You want maggots, projectile nose bleeds and someone fighting a corpse? You got it! 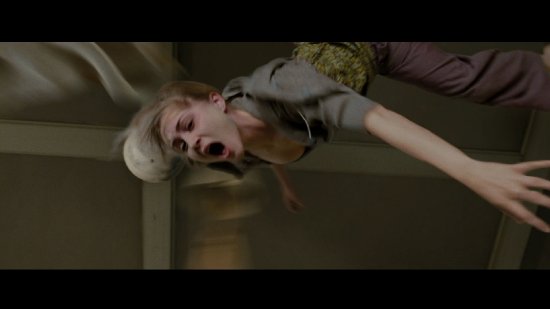 The Sound
The only option is DTS-HD Master Audio 5.1 which is extremely clear with good separation, presenting the dialogue well and using the surrounds to great effect in the more intense scenes, really involving you in the action. The rear surrounds aren't always in use but, when they are, it is to great effect with objects smashing behind you, wind swirling and voices and screams emanating from around the room.

It is very well scored by Christopher Young with the music helping to escalate the more intense and horrific scenes whilst playing with the humour in the more gross-out and amusing aspects. The sound effects and sound design of the soundstage impresses to bring the most out of everything from the quieter and more intimate scenes to the louder and scarier ones when you have several spirits wandering around and sounds coming from every speaker. 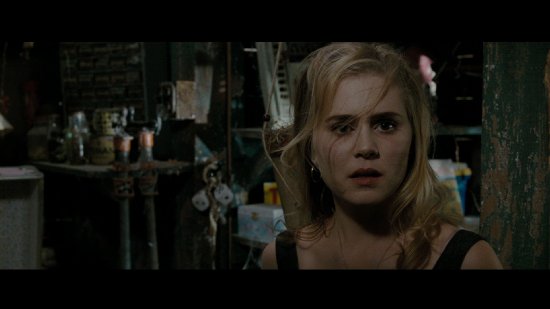 Final Thoughts
Drag Me To Hell is an absolute riot that sees Raimi back in familiar territory so those who like the Evil Dead films will find plenty of knowing humour here (despite the lack of Shemps, Ted Raimi and Bruce Campbell; a cameo was planned but his schedule didn't allow it). This is a horror film with crossover appeal so fans of Raimi's work will lap it up and those who saw the trailer and were curious will find much to like. Released in good time for Halloween, there are few better new releases to watch on October 31st. I would guess that horror fans will laugh much more than those who haven't seen a great deal of genre movies who would be more likely to jump, cover their mouths and not really get the humour in the horror.

Can I offer you some lucky heather?