DVD
In Search of a Midnight Kiss 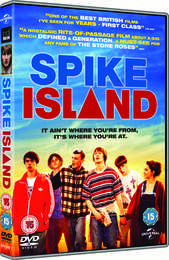 Oops, we kind of meant to tell you about this before, but got sidetracked. Anyway, better late than never, Universal Pictures UK have announced the release of British coming of age drama Spike Island, out on DVD and Blu-ray this coming 14th October.

Written by Chris Coghill, and directed by Mat Whitecross, this stars Elliot Tittensor, Nico Mirallegro and Emilia Clarke. Extras will include The Making of Spike Island featurette, extended and deleted scenes, plus Zippy doing a bit of drumming.

Expect a recommended retail price of around £12.99 for the standard definition release, and £14.99 for the high def version.

Gary 'Tits' Titchfield, Darren 'Dodge' Howard, 'Chris 'Zippy' Weeks, 'Little Gaz’ Duffy and 'Penfold' Andrew Peach are Shadow Caster, a wannabe band on the verge of leaving school and conquering the world. They’ve set their hearts on getting their demo tape in to the hands of their idols, but first they need tickets to the gig.

This movie evokes the feeling of being 16, when music and your friends are your entire world, and a lifetime feels like forever. Nothing will stop them from getting to the gig, but their journey tests their friendships to the limits and their lives change forever.