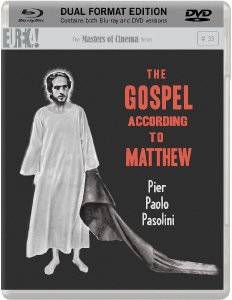 Legendary director (and avowed atheist) Pier Paolo Pasolini's The Gospel According to Matthew [i]Il vangelo secondo Matteo] is one of the great retellings of the story of Christ - a cinematic rendering (filmed by invitation from the Pope, no less) at once both passionate and poetic.

With stunning black-and-white photography, an eclectic soundtrack (Odetta, Bach, a Congolese mass, etc), and using a cast of non-professionals who voice dialogue drawn directly from scripture, The Gospel According to Matthew depicts the key events in the life of Christ, from immaculate conception to death on the cross.

Vaunted by the Vatican as one of its select few recommended films, acclaimed by the Archbishop of Canterbury as a "great film", and revered by critics and audiences alike, Pasolini's Oscar-, Golden Lion-, and BAFTA-nominated film remains a magnificent, awe-inspiring experience.

This is the long-awaited, first ever Blu-ray edition anywhere in the world for this masterpiece of Italian cinema, directed by Pier Paolo Pasolini, the legendary director of Salò, or the 120 Days of Sodom; The Decameron; Teorema; Mamma Roma; The Arabian Nights; Accattone; The Canterbury Tales; Oedipus Rex; etc. The Masters of Cinema Series is proud to present The Gospel According to Matthew in a special Dual Format edition available in the UK from 26 March 2012.