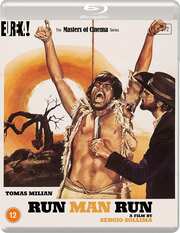 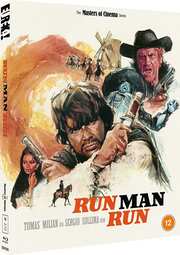 After aiding in the escape of a fellow desperado, Cuchillo is given the location for a stash of hidden gold intended to fund the Mexican Revolution. Pursued by mercenaries, bandits, corrupt officials, an American gunslinger, and even his fiancé – Cuchillo will have to use all his tricks to stay alive.

This “Zapata Western” concludes Sollima’s triptych of Western’s that examined violence, politics, and revolution – and it is a suitably epic conclusion, filled with action and violence accompanied by a brilliant score by Bruno Nicolai and Ennio Morricone. The Masters of Cinema Series is proud to present Run, Man, Run fully uncut for the first time ever in the UK, in a worldwide premiere on Blu-ray from a definitive 4K restoration.