Blu-ray
Ashens And The Quest For The Gamechild

The 41 Year Old Virgin Who Knocked Up Sarah... hits DVD in May 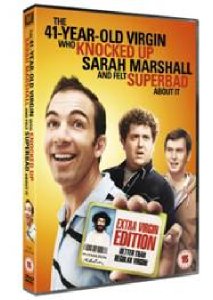 Get ready for the ultimate comedy spoof as The 41 Year Old Virgin Who Knocked Up Sarah Marshall and Felt Superbad About It comes to DVD on 16 May 2011 from Twentieth Century Fox Home Entertainment. This hilariously raunchy farce parodies some of the biggest comedy blockbusters including Superbad, The 40 Year Old Virgin Forgetting Sarah Marshall, and Knocked Up. If you enjoyed those, get ready to cry with laughter with this outrageously funny film.

The film follows Andy, (Bryan Callen; The Hangover, Bad Santa) a middle aged stand up comedian who is far from being funny. Having always had a hard time with the ladies he's persuaded that he needs to hook up with a girl using any means necessary, especially as he hasn't had sex.....ever.

His equally luckless friends are also on a quest for companionship and enlist the help of their nerdy friend McAnalovin (Austin Michael Scott; Disaster Movie, Weeds)and his fake ID. When two policemen bump into him and find his ID, it signals the start of his very own nightmare.

An unforgettable adventure begins for each of the friends to find a female willing to make their wishes come true. During their journey, the friends find themselves in a number of compromising situations including a tricky encounter in an off-license, being wrongly framed as a child molester, and getting a girl nine months pregnant within a day!

Directed by Craig Moss (Saving Ryan's Privates), and featuring Mircea Monroe (Chuck, Episodes), Noureen DeWulf (Oceans Thirteen, The Back Up Plan)and Chris Spencer (Black Dynamite, Don't Be a Menace to South Central While Sipping Your Juice in the Hood), the movie is a non stop rollercoaster ride of riotous fun that sees the gang of friends end up in sunny Maui in a last attempt to achieve their goals.

Will Andy and his band of unconventional friends' antics result in a happy ending? Find out when The 41 Year Old Virgin Who Knocked Up Sarah Marshall and Felt Superbad About It comes to DVD on 16 May 2011.