Site Change: Online Anime!
It took me long enough, but I've finally got round to putting semi-permanent links up to the legal online anime that is currently ringing my bell. That's the list there on the right. No, your right. And I admit that the end of the season is the daftest time to put it up, with a whole raft of new shows on the horizon, and also while Funimation's Video Portal is still out of commission for UK viewers (they have put Samurai Champloo up for you lucky Americans though, well worth watching). The bottom line is that it was less work for me. Even though many of those shows are ending their simulcasts, I'll leave the links up there as long as the shows are still viewable, or the list doesn't get too crowded. Just so you don't jump in blind, I'll share a little about what each show is about. There's a quick grade out of five for you to ignore too.

The Melancholy of Haruhi Suzumiya
I shouldn't really have to for this one, but Haruhi Suzumiya is a rather unique girl, who to defeat her boredom started the SOS Club at High School, to seek out the weird, strange and paranormal, and only Espers, Time Travellers and Aliens need apply. Them, and perpetual dogsbody Kyon, from whose point of view we follow the story. The first season was a big hit when it aired, and Kadokawa recently started repeating the episodes in Japan. And then they stuck some episodes of a brand new Season 2 in without telling anyone. That's just what you would expect from a show as quirky and fan oriented as Haruhi Suzumiya.

They've recently put the first eight episodes, subtitled, onto Youtube, and they will stay there until July 5th, when the next batch will be put up. Newcomers to the show should definitely take the opportunity to check it out, while existing fans should pay close attention to episode 8, the first of the new episodes. 5/5

Gurren Lagann
Or Tengen Toppa Gurren Lagann, to give it its full name. This anarchic show from Studio Gainax is another fan favourite, combining the energetic surrealism of FLCL with the whopping great mecha of Evangelion. It's already been a fansub hit, a DVD hit in the US, and it's coming to the UK courtesy of Beez this summer. As a preview, Manga Entertainment have the streaming rights, and have been putting episodes up on their site for all to see. They have also started selling it through i-Tunes at a price high enough for you to ignore and just buy the DVDs instead. Manga are currently going through the English dubbed episodes in batches of 5, and they're currently up to 11-15. You've missed the start, but may as well check out the biggest mecha show since Evangelion. 3/5

Time of Eve
Just click on the link and watch the episodes. 6/5

What! It's amazing, it's stunning, it's short and sweet, and episodes are agonisingly released at one every few months. The animation is gorgeous, the subject matter thought provoking (an almost Asimovian look at robots), and more thought and effort goes into a single episode than some whole series. There are only four episodes at this time, just fifteen minutes in length each, and it's the best thing since sliced bread.

School Days
NSFW, most definitely. It's a high school romance that takes an angst ridden love triangle and goes from a sunny rom-com and takes it into dark territory indeed. It's that controversial show that had its final episode pre-empted by real life events, and set forth the nice-boat Internet meme. Definitely not for the squeamish, but then again, neither are most real-life relationships. 3/5

Fairy Musketeers
Here's something that will take the edge off. The magical girl is a staple of the anime medium, and Fairy Musketeers has three. It combines the trope with the extensive catalogue of fairy tales to fashion something quite delightful, charming and clichéd. The real world and the magical world are brought together, and young Souta and his friend Ringo are pulled into the magical realm of Phandavale, where they go on adventures with Red Riding Hood, Snow White, and Briar Rose. Charming and sweet and quite well written too. 2/5

Kigurumikku
If all that sacharrine sweetness is too much for you, try the magical girls in this parody instead. It's another one of those shows which has the odd episode, released at unspecified intervals. There are only two episodes up at the moment, but they are hilarious. It's also definitely NSFW. 3/5

Ristorante Paradiso
This is something a little more grown up, definitely aimed at a more mature market, and the animation style may put people off a tad. It's worth sticking with though. A young girl heads to the big city to find her estranged mother, only to wind up working in the restaurant that her mother's husband has opened in her honour. It's a slice of life, character study, with just a hint of the reverse harem. The restaurant's staff have been carefully selected to cater for a certain fetish, that of older, tall men with glasses. The employees are all elegant and refined, and all have a story to tell. 3/5

Hayate the Combat Butler S2
This is one of those shows that are designed for the anime fan in particular, a harem parody with so many references and winks to the audience that a genuine otaku would faint from the strain. It's also devilishly funny and subverts the genre with abandon. It takes a while to grow on you, but once you're hooked, it's an absolute delight. Unfortunately there is no sign of Season 1 legally online, I know, I've looked. 4/5

Natsu no Arashi
The best show of the season (legally available, that is). If you like James Bond, you'll love the opening sequence. It's another of the shows that diverts from the usual animation style, often looking awkward, but it's brilliantly animated by Shaft, from the creator of School Rumble, and with a cast of eclectic characters and an engrossing storyline. It's the story of one summer in the life of a boy named Hajime, when he met a ghost from the Second World War named Arashi and together they went travelling through time, when they weren't working a summer job at a café. I love this show and can't get enough of it. It's a good thing they announced a second season due this autumn. 5/5

Saki
A show about Mah-jong? It doesn't seem likely, but Gonzo animation have managed to provide entertainment from a venerable Chinese board game. I know nothing about the game, not the rules, not how it's played, or even what any of the tiles are, but it doesn't seem to matter with this entertaining story of a National High School tournament populated by a host of intriguing characters. It doesn't hurt that one of the main characters has a cleavage that requires structural engineering to provide adequate support, and there is just a brief frisson, a little lesbian subtext to be going on with. That's called fanservice, and that's what Gonzo excel at. 3/5

Shangri-La
The second Gonzo show is perhaps the finest action sci-fi story they've created in years. It is what they do best after all, but standards have been slipping of late with shows like Blassreiter under-whelming and under-performing. Shangri-La is a timely reminder of why they are so good at this, with excellent animation, and a compelling storyline, set in a future where the world has succumbed to global warming, and the survivors have a brave new world to deal with, while the powerful continue to play their manipulative games. It's replete with the usual clichés, and some stereotypical characters, but also exhibits a long absent freshness and originality. Well worth a look. 4/5

Aside from the first two, all the other shows are at Crunchyroll. Kigurumikku and Time of Eve are updated when they are updated. School Days and Fairy Musketeers are up in their entirety, while Natsu no Arashi, Saki, Ristorante Paradiso, and Hayate are coming to, or have come to the end of their simulcast runs. Shangri-La on the other hand is just halfway through and gets one new episode a week. Unlike Manga or Kadokawa, you don't have to worry about the episodes disappearing in a few days or weeks. 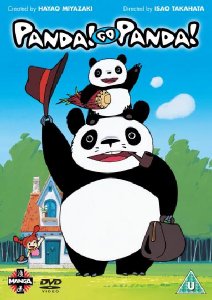 Back to the DVDs now. It turned out to be a bumper week last week, with five reviews of anime and anime related goodness to be going on with. It started with Hayao Miyazaki. You can't go wrong with that name. Is what I want to say, but Panda! Go Panda! comes from 1972, long before Studio Ghibli, and long before classics like Kiki's Delivery Service and Spirited Away. This is something a lot more unrefined and basic. It still has a certain charm and innocence to it, and more than a couple of hints of Totoro. Read the review for more. 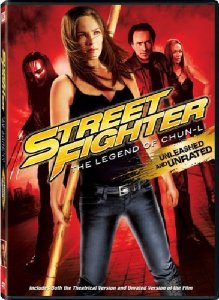 David is a recent addition to the ranks of MyReviewer, and he took a look at Streetfighter: The Legend of Chun Li on DVD early last week. I've managed to avoid the anime, (although Manga UK have released a five disc boxset this week collecting the existing releases), I've managed to erase the Jean-Claude Van Damme movie from my head after years of therapy, but I do have fond memories of the original Streetfighter II arcade game. Jumpers for goalposts, hmm? I know next to nothing about this live action film, except that whatserface from Smallville is in it. Click on David's review, and then guess if I've bought the US DVD yet. 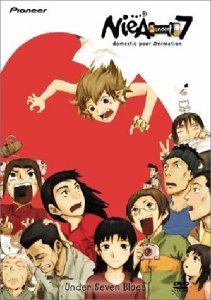 It was my final visit to the Enohana bathhouse next, as I took a look at NieA under 7: Volume 4. You've heard this before I'm sure, that it's a criminally underrated Yoshitoshi ABe show, that cruelly remains absent from UK shop shelves, and I can't understand how, despite being deleted for years in the US, new copies still remain available on the warehouse shelves of online retailers. One final time I shall urge you to support this fine series, and if you won't, I shall hold my breath until I turn purple. 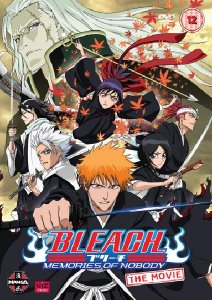 Bleach has a movie due. Actually overdue really, as we've had to wait for the TV series to catch up with its episodes. Movie adaptations of long running action series rarely come up with the goods, usually offering little more than well-animated filler, designed to sate the appetites of pre-teen male audiences. Not so with Bleach the Movie: Memories of Nobody, which actually has a decent story beneath the eye-candy, as well as layered characterisations, and a truly memorable guest character. 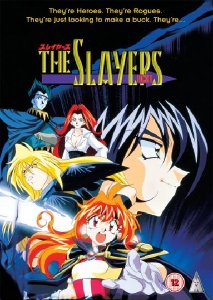 I wrapped up a week of reviews yesterday with Slayers Next: Volume 3. It's a role-playing game of an anime, heavy on the comedy, and surprisingly entertaining, given its rough and ready production values and age. Again I've said this all before, but that's what happens when you're reviewing one of these discs every month. We're getting all penultimatey with volume 3, setting up for a series conclusion, but not before we have a hilarious collection of stand-alone episodes, including the traditional cross-dressing show.

Manga Entertainment release Panda! Go Panda! and Bleach the Movie: Memories of Nobody on July 6th, while MVM release Slayers Next: Volume 3 on the 13th. NieA under 7: Volume 4 was released by Pioneer in the US when I was still in short trousers, while Streetfighter: The Legend of Chun Li comes out tomorrow in Region 1 land, courtesy of 20th Century Fox.