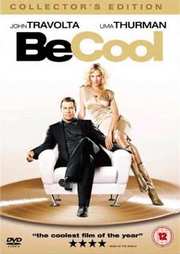 Front Cover of Be Cool

Screenshot from Be Cool
Related Items

DVD
Two For The Seesaw (UK)

Review of Be Cool

Isn`t it great when you find something new that just clicks with your sense of humour? You`ve been looking around for something different to watch and you`ve heard good things about something. Nine times out of ten what you find is anything but what you`re looking for. Then the tenth time you hit something that has you rolling in the aisles.

Be Cool did that for me. Somehow I`d managed to miss the original movie based on Elmore Leonard`s Chili Palmer character "Get Shorty", but something tipped me off that this film was fun, and that was why I put my name down for it in the Reviewer sweepstakes.

John Travolta plays the epitome of cool, Mr Chili Palmer. I suspect strongly that sooner or later a dictionary will be published, and in the definition of the word "cool", sense 2 under "temperate, lacking in heat while not actually harming the reproductive abilities of brass monkeys," where it says "soigne, debonair, unflappable," there will be a picture of Mr Travolta as Chili (but not a shot of him in Battlefield Earth.) Chili is a man of many talents. He`s been a shylock (gangster debt collector) and a movie producer and now he`s looking for something fresh to do. When his pal Tommy Athens (James Woods) gets whacked by the Russian mafia, he finds himself involved in the record business. And that turns out to be more sinister than the movie industry.

He discovers singer Linda Moon (Christina Milian), but unfortunately she is in no-hope girl band with an iron-clad contract with sleazy manager Raji (a dynamite turn by Vince Vaughan) and record producer Nick (Harvey Keitel). Chili and Linda hook up with Tommy Athens` widow Edie (Uma Thurman) and a plot starts to thicken as Chili sets about getting Linda out of her contract and a massive hit all in one.

Standout performances in the movie come from two double-acts. Vince Vaughan plays Raji, Linda`s manager. He`s a pudgy white guy suffering from the same delusion as Richard Madeley - he thinks he`s black. He`s the loose-cannon threat throughout the movie, a nasty-enough piece of work to be a genuine problem but completely lacking in credibility. Throughout the picture you`re looking forwards to him getting his just desserts, which in his case might be banana flambe. He is aided and abetted by his gay Samoan bodyguard-minder Elliot, played by the Rock in a totally scene-stealing, non-self-conscious comedy performance. Elliot is a brilliant creation - he`s torn between wanting to be a Country & Western singer (he belts out You Ain`t Woman Enough To Steal My Man) and a great actor (his audition piece is an exchange from Bring It On, the cheerleader flick). The other comedy duo is Sin LaSalle, record producer (played by Cedric The Entertainer) and the leader of his Dub MD toughguy band, Dabu (played by Andre 3000). Sin sees himself as a gangsta record producer, even though he lives in Bel Air in a huge mansion and he picks his daughter up from expensive private school in the limo every day. Tommy Athens owed him $300,000 which he wants by Friday or else. Dabu is the Gracie to Sin`s George, constantly subverting and undermining the whole Gangsta culture (with its sportswear and bling costume cliché).

Cross and double-cross follow in an elegant dance choreographed by Chili.

F Gary Gray directs from Peter Steinfeld`s excellent adaptation of Elmore Leonard`s novel. He shows a deft lightness of touch that stops the movie becoming too dark. It still remains very darkly comic, but never lurches into being genuinely sinister.

Watch out for Robert Pastorelli in what must be one of his last roles, as the hit man Joe Loop who Raji hires to terminate Chili. And stick around for the beginning of the end titles as the entire cast show off their dance moves. 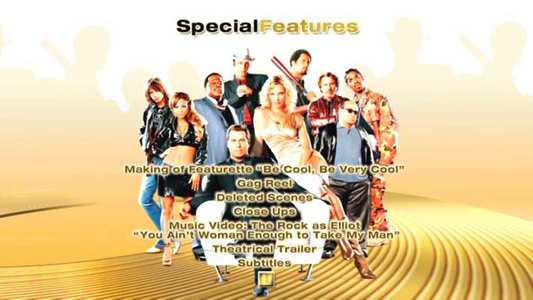 The movie is presented in its original aspect ratio of 2.35:1 as anamorphic widescreen. The picture is, as you would expect, immaculate with strong, vibrant colours and an excellent contrast range. Jeffrey L Kimball`s photography is beautiful. You really feel the brightness of the California sun in the exterior scenes, but interior and night scenes are also vibrantly shot. 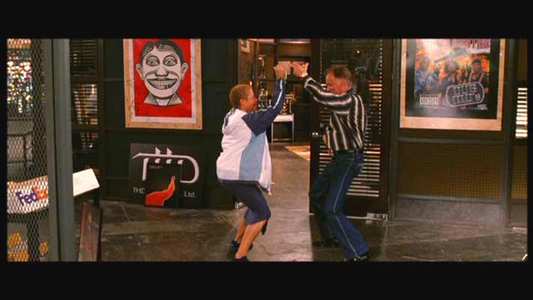 The music-heavy soundtrack, scored by Shrek`s John Powell, is reproduced in Dolby Digital 5.1. Because there are also the other main European languages on the disc in 5.1, there hasn`t been room for any other audio options such as a yak-track or DTS. 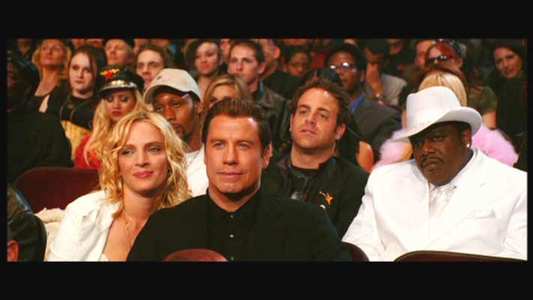 Cornerstone of the special features on the disc is the twenty-minute making-of featurette "Be Cool, Be Very Cool"* This is a pretty standard puff-piece, presented in 4:3 but gives a nice insight into the movie. There`s a Gag Reel of outtakes and actors messing around on the set. Deleted and extended scenes (none of which would have added greatly to the movie). Close ups are six short featurettes on the actors and actresses. There`s the whole agonising music video for "You Ain`t Woman Enough To Take My Man" starring the Rock as Elliot, and a theatrical trailer. The feature and extras are all fully subtitled for the hard of hearing.

*Am I the only person who hears "Be Cool, Be Very Cool" - "I`m hunting wabbits"?

As ever, I`d like to lodge a short protest at the unskippable "Piracy Is A Crime" nag video that runs before the menus on either disc load. I know it`s only 47 seconds, but it`s on the start of virtually every damn disc I see and those lost 47 seconds are starting to add up. We. Get. The. Message. 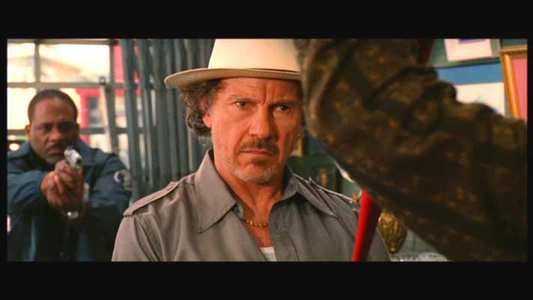 I`m not exactly sure why I`ve ended up gushing about how good this movie is, but something about it certainly tickled my funny bone. Maybe it was the wonderfully sly storyline, or the slick dialogue (which you really need to listen to). There`s some violence, some swearing, but as modern movies go it`s the soul of discretion. And it`s got to score something for getting Uma Thurman and John Travolta dancing again ten years after Pulp Fiction.