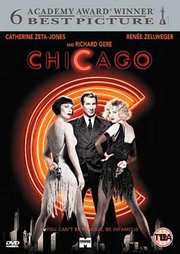 Synopsis:
Renee Zellweger is Roxie Hart, a murderess who becomes front page news in 1920s Jazz Age Chicago. After shooting her no good lover full of lead, it`s off to death row with her, where she encounters the queen bee warden (Queen Latifah) and star in-mate Velma Kelly (Catherine Zeta-Jones). Managing to secure the services of suave lawyer Billy Flynnn (Richard Gere) and with the help of some media manipulation, Roxie hopes to escape her murder rap and kick start a career on the stage. But what happens after her fifteen minutes of infamy have passed her by? Chicago is an honourable, wholly enjoyable attempt at an old-style Hollywood musical.

Introduction
Its a musical, some musicals I like, some I don`t. I don`t usually get worked up about them though. I prefer sci-fi, action, comedy... musicals are in the also-ran category for me, unless you count the Blue Brothers.

Now I`m not a musical casting director, and probably just as well! However if I was, and was searching around for a cast to take a hot stage musical to the silver screen, would my 1,2,3 must haves be Renée Zellweger, Richard Gere and Catherine Zeta-Jones? Hmmm - possibly not.

However - thats probably why I`m not in the business, as these three supported by the other members of the cast deliver some excellent performances. As they keep saying all the way through the commentaries, they do all their own singing and dancing too.

The Plot
The story is basically about two women on murders row, both guilty of killing one or more people, and facing possibly the ultimate sentence of the noose.
Lawyer Billy Flinn, however knows how the system works, and if you can stump up $5000 he will probably get you off.

He does this by turning your case into a media circus and pressing all the right buttons. The press, the public and the jury will all be convinced it was self defence, or at least justifiable, long before it gets to court. He spins a tangled web of lies and deceit changing the details as he wishes, and the media lap it up. Its a good job these days we no longer have to face up to such spinning to the media!

The action is shot through Roxie`s (Renée`s) eyes. She does her part very well, but is rather overshadowed by Catherine`s supporting role. I think its partly the make-up, and the strength of personality, together with some pretty good singing and dancing she does that does this. There is nothing wrong with Renée`s performance she just isn`t so dominant on screen as Catherine.

Richard Gere is certainly a believable shark-lawyer figure, and spent 3 months practising his tap-dancing for this role.
Queen Latifah as the warder is certainly, ummmm, well impressive in her number and in the amount of chest area displayed!
John C. Reilly does well as Roxies long suffering husband, with quite a moving song.

The Visuals/Audio
The visuals are great, as one would hope in such a modern piece. There is a 5.1 and a DTS track, both of which are pretty effective.

The Extras
For extras, there is a commentary (mostly) by the director Rob Marshall, and screenwriter Bill Condon chips in, which is pretty good. They talk you through every scene in detail, pointing out the effects they were looking for. I found Bill Condon`s comments about Rob Marshall drifted occasionally into the sycophantic at some points. However I`ve heard worse ("You`ve got mail" commentary comes leaping to mind!). Some interesting details, like John C. Reilly sent in a tape of himself doing his main numbers in two different ways to try and get the part, but he actually did 13 different recordings and sent in the 2 best. Now theres a man who is keen!

There is a behind the scenes bit, which is kind of par for the course. Everyone praising each other, saying what a great crew it was and that stuff. Still some gems in there.
A deleted number with and without commentary, explaining why it was left out.

Summary
So - I came to the musical not expecting to like it much. I suspected it had been overhyped a little, and the casting didn`t really inspire me.
This is not my favourite musical ever, in a genre which doesn`t inspire me very much, but I have to admit it is very well done. It probably is worthy of its oscars, the songs I`m still humming when I forget myself.
So ...
if you like musicals you`ll probably love it.
If you hate musicals, why have you read this far!
If you`re ambivalent about them, its worth checking out.
posted by Julian Onions on 5/2/2004 12:50