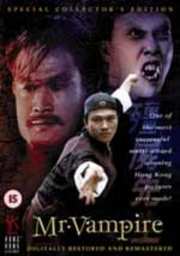 Synopsis:
Mr Vampire is a multi -leveled, kaleidoscopic action adventure which combines the supernatural, elements of black comedy and award-winning action in one of the most successful Hong Kong pictures ever made. Now re-mastered, enjoy the physical brilliance of leading-man Chin Siu-ho, the stunning art design of Lam Sai-kan and the innovative direction of Ricky Lau. This flamboyant and thoroughly entertaining fable of the Chinese supernatural was so successful it spawned an entire sub-genre of movies.

Mr. Vampire (or Mr. Stiff Corpse if you're being literal) is a tricky film to review because of its completely off the wall plot, but I'll do my best. The basic premise is simple enough: Kau (Lam Ching-ying) is a Taoist master who runs a mortuary, aided by two incompetent apprentices named Man Choi (Ricky Hui) and Sheng (Chin Siu-ho). As part of his duties, Kau is also responsible for giving burial advice, and it is in this capacity that he is approached by the millionaire Mr. Yam, who wants to exhume his dead father's corpse in order for it to be reburied in a more suitable plot (which in turn will bring Yam good fortune).

The body is taken to Kau's for storage, until a suitable site for reburial can be found, and once there it becomes apparent that the corpse is slowly but surely transforming into a vampire! Kau instructs his apprentices to imprison the vampire in his coffin (using ink mixed with chicken blood of all things), but as is the case with most incompetent apprentices, they make a complete pig's ear of it. The vampire escapes and goes on a rampage, killing Mr. Yam in the process!

When the bumbling Chief of Police can find no logical explanation for Yam's death, he arrests Kau and takes him to prison. This leads to one of the best set pieces in the film, as the late Mr. Yam (now a fully fledged vampire himself) wakes up and goes on a rampage of his own. Quick thinking from Sheng saves the day, but unfortunately the original vampire is still at large and attempts to kill Mr. Yam's beautiful daughter Ting-Ting (Moon Lee) and Man Choi. Thankfully Kau and Sheng arrive in the nick of time, but not before Man Choi is infected with vampirism!

Mr. Vampire combines elements of horror, comedy and martial arts to produce an entertaining movie with something for everyone. I'm not a huge fan of slapstick comedy, but thankfully Mr. Vampire doesn't go too overboard in this department. Some of the verbal humour doesn't translate especially well though, which is unfortunate. On the other hand the physical comedy is well done, with the hopping, rigour mortis afflicted vampires stealing the show, especially when around a dozen of them are hopping in unison!

Although I didn't find the film all that horrific, some animal right activists might, as there are a couple of instances where live animals are killed to further the story. Also, the martial arts action is fairly limited compared to most Hong Kong action flicks, but what is on display is superbly done. The opening fight sequence, aforementioned jailhouse scene, and the climactic battle are all fantastic!

I really enjoyed Mr. Vampire (although it's not as hilarious as I remembered), and it's great to get a different perspective on the vampire myth as a whole. I'm used to countless rehashes of the same plot in films from John Carpenter's Vampires to Dracula 2000, with only one or twists to differentiate the bloodsuckers. Chinese vampires, however, are completely different, as are the defences against them. When was the last time you heard of a vampire hunter going into battle with some sticky rice, ink mixed with chicken's blood and bits of yellow sacred paper as their last lines of defence? One thing I did love was the way in which the character's escaped detection by holding their breath (presumably because the vampire's eyes have atrophied since the time of its death and can no longer see).

The acting is great from the principal cast members, with Lam Ching-ying and Chin Siu-ho both putting in fine performances. Ricky Hui provides the comic relief for most of the film, and he goes to great lengths to keep the audience laughing (a bit of cross dressing never hurt anyone). A special mention must also go to Moon Lee, who looks stunning in this film. She puts in a nice performance as Yam's daughter, although she doesn't get to fight

The "special" effects may be considerably less than that, but it doesn't hurt the film. The poorly made-up, hopping vampires simply add to the "camp" value of the film. Things can get a little bit absurd at times, such as the obvious use of dummies in certain scenes, but that all adds to the charm and is in keeping with the rest of the movie.

Hong Kong Legends have provided a pleasing transfer for this release of Mr. Vampire. The 1.85:1 anamorphic picture looks surprisingly good for a film originally released in 1985, with natural flesh tones and vibrant colours. The picture is not without some minor flaws though. While black levels are fine, contrast appears to be a little high in some scenes and there is some grain in evidence. The image also appears to be a little soft, although this is perhaps to be expected given the age of the film. Overall I'm fairly impressed with the restoration job that's been done here, although I haven't had the opportunity to compare this disc to either the region one or region three releases.

Mr. Vampire's Dolby Digital 5.1 mix comes in both the original Chinese and an English dub (more of which later). The original language track features clear dialogue throughout, but as with most of the Asian films I've seen, the dialogue doesn't sound very natural. It's almost as if the whole film has been badly ADR'd. Surround channels come into play very occasionally, mostly for the spooky background music (which is very good). The sub doesn't get much of a look in, but it does come to life briefly during some of the action scenes. All in all this is a nice mix, but it's not going to test your system.

The English dub is worth listening to at least once, if only for comedy value. It may dumb down the original dialogue, but it creates some comedic moments of its own (quite intentionally it would seem). On a couple of occasions the characters actually acknowledge the fact that they're in a film with lines such as "That will never happen, this is a low budget film" and the like. It's actually quite astounding to hear some of the dialogue substitutions-some of the characters names are completely changed. For example, Man Choi becomes Malcolm and Sheng becomes Simon! To be honest, the most amusing feature of the English dub is the appalling quality of the voice acting; it really is quite shocking.

The extras for this release are a marked improvement over the relatively bare region one and three releases. The jewel in the crown of the supplemental material is undoubtedly the feature length commentary from Hong Kong cinema expert Bey Logan. For once the term "feature length" is no exaggeration, as Logan talks incessantly throughout the proceedings. The guy must have had a very sore throat after recording the commentary, which is jam-packed with extremely interesting and entertaining details about the film and the actors. It really heightened my enjoyment of Mr. Vampire as a whole, and it ranks as one of the best commentaries I've ever heard.

By comparison, the rest of the extras don't quite look as good. The next feature we come to is a ten-minute tribute to the late Lam Ching-ying, featuring interviews with Sammo Hung and Chin Siu-ho, as well as clips from some of Lam Ching-ying's movies. The documentary gives a little insight into Lam Ching-ying's character and his performance in Mr. Vampire. Also mentioned is an encounter between Ching-ying and Bruce Lee, in which Lee demonstrated his power to the then stuntman. Also in this section is a biography of Ching-ying, which details his life from the early years until the time of his untimely death.

Now we come to the trailers. The disc features both the UK promotional trailer and the original theatrical trailer. The UK trailer is fairly short, but manages to make the film look far more action packed than it actually is. The original trailer is around four minutes in length, but seems much longer. You almost feel like you've seen half the film after watching this one!

Next we have an interview gallery, which features both Chin Siu-ho and Moon Lee. Both interviews are conducted in Chinese with compulsory English subtitles. The interviews give a fair bit of insight into both actor's careers and their experiences on Mr. Vampire, but I honestly can't say I'd watch them more than once or twice (and then only to get a look at Moon Lee, who's still pretty foxy).

Finally we have a Coming Attractions section, featuring disc information and trailers for two of Hong Kong Legend's forthcoming releases - 'Zu Warriors from the Magic Mountain' and 'The Scorpion King'. These have now been released, and no doubt the latter of the two is better than the Mummy spin-off of the same name…

Unfortunately the advertised featurette 'The Vampire's Lair' failed to materialise.It's a pity, as aside from the commentary the extras are pretty lightweight. The commentary is outstanding though, and definitely bumps the score up a notch or two.

Mr. Vampire certainly isn't the film I remember from my youth, that much is clear. I didn't find it as hilarious as I expected, but nostalgia can often cloud one's judgement. Having said that, it is an entertaining piece of filmmaking, and one that I have watched more than once during the course of this review. Both video and audio are good, and the commentary helped immensely in giving me a greater understanding of the film, but the remainder of the extras are slightly disappointing. In spite of this the good still outweighs the bad, and fans of the genre will lap this up. I have no trouble recommending the film to both die-hards and newcomers alike.
posted by Chris Gould on 5/1/2003 21:14
8 / 10

Brilliant! Although not as good as I remembered it to be, it was still highly entertaining and original. The first half hour is quite slow but the last half hour more than makes up for this with some superb fight choreography, humour and action. The three leads all produce good acting performances, the direction is good and the plot simple but effective.

If you`ve never seen a Hong Kong horror film, this is a good place to start. You will notice different things (eg. Chinese vampires can`t detect you if you hold your breath, they can be neutralised with holy messages) which just adds to the enjoyment of the film.

The DVD presents a very good picture and has some nice extras. Well worth buying as it gets better with repeated viewings.
posted by morpheus177 on 18/2/2003 18:21