Blu-ray
Withnail And I 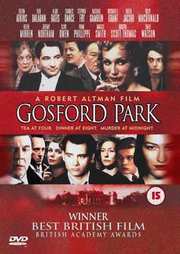 Synopsis:
Robert Altman directs this elegant period drama and Agatha Christie-style murder mystery that features the cream of British acting talent. Gathered at aristocrat Michael Gambon`s big house are fellow toffs Charles Dance, James Wilby and Jeremy Northam (as British matinee idol Ivor Novello) among others. Meanwhile, downstairs in the bustling servant`s quarters we encounter Alan Bates and Helen Mirren as the head male and female members of staff.
The various intrigues that play out between members of the different classes and sexes are all observed with Altman`s customary withering eye and trademark roving camerawork. After a murder is committed, comical pipe-smoking detective Stephen Fry arrives, but the solution is arrived at in an unconventional way. With an impeccable ensemble cast that Merchant Ivory would die for, Gosford Park is a classy piece of cinema from a great director at the top of his form.

I won`t spoil this complex film for you by a discussion of the plot. Suffice it to say that it twists and turns better than any Agatha Christie, Evelyn Waugh or PG Wodehouse. As shown on the box cover, the film devotes an equal amount of time to life `below stairs`, which is, if anything, more intricate and full of intrigue than what goes on in the drawing-rooms upstairs. It`s an all star cast; possibly Kristin Scott Thomas stands out even above the rest; I also liked Kelly Macdonald a lot.

Video: The anamorphic transfer is good in some ways but extremely disappointing overall. The level of detail is good (important for this film), the images fills right to the edges of the 16:9 frame, and the colours are accurate, by-and-large. Black level is set roughly correct, maybe a couple of notches above perfect. There is only a little edge enhancement, and no noticeable compression artifacts; swirling mist in the title sequence swirles properly.

The transfer falls down in two major respects, however. First, it has an extremely murky look throughout, whether in well-lit or dusky shots. Many `period` films have an intentionally dull colour palette, and so they require exceptionally careful handling in the DVD transfer process. Unfortunately this has not happened here, resulting in the entire colour palette being compressed at the dark end of the spectrum. If you are able to modify it on your playback equipment, you will certainly benefit by pushing the `gamma` setting close to its maximum. The need to do this possibly indicates that an error was made in the DVD transfer process - some other disks from Entertainment in Video (e.g. `The Piano`) have the same problem.

The second visual flaw is that the film was shot and shown in cinemas with an aspect ratio of 2.35:1, whereas this DVD has an aspect ratio of 1.78:1 (i.e. exactly 16:9). I do not know whether it has been masked down or whether the matte has been opened up slightly for this DVD transfer, but either way it is probably not what most viewers would want. On the other hand some (myself included) may not mind too much as the 1.78:1 aspect ratio has the advantage that the whole available resolution of the DVD is being used, so that detail is maximised.

Audio: This is what Americans call a "talking heads movie", but unfortunately the dialogue is difficult to follow due to poor sound quality in places. This is not a fault of the DVD transfer, as apparently it was the same in the cinema. The problem stems from the fact that the dialogue is all `live` dialogue from the filming, and little or no ADR has been used even where the dialogue is very indistinct. As it is a rapidly paced film, there are places where, for example, an important line is said as the actor is turning away, or when he has his back to the microphone, and my feeling is that some judicious use of ADR would have helped at these points. The dialogue is also recorded at a noticeably quieter level than on most DVDs. The music score, in contrast, is clear and nicely balanced throughout.

There are several extras, including an interesting director`s commentary (the only extra worth having, in my view) - this is a particularly worthwhile extra when it is such a critically acclaimed director as Altman.

Overall, I would like to recommend that people do not buy this because of the flaws with the video transfer (which are unwarranted in 2002), but if you are a fan of the film you will probably buy it anyway as it is certainly worthwhile watching it several times, even in the unlikely event that you understood everything that was going on in your first viewing.

(I have edited this to add that I do NOT agree with Jason Bagnall`s comments that the video transfer of this film is good. You can see for yourself how bad it is just from the screenshots on this site. It is a good film though!)
posted by inti on 6/10/2002 05:18
5 / 10

This is a very demanding movie that seems to go on forever. There is some very good acting present in the movie and the costumes and make up really give a feel of the time. The movie seems to move at a very slow pace and this goes on till the very end. It was no shock who died and was minor shocking finding out who the killer is. Other than that, this movie is just about rich people and their servants. I failed to see what all the big fuss about this movie was. It was about average.
One positive thing about this movie is that there is no one main character. The film portrays things from everyones point of view and everyone almost has an equal share of the screen time. I was expecting a tense murder mystery and so was majorly dissapointed with this lavish drama but it does have its strong points.
The video is quite poor considering it is quite a new movie and had a good cast and budget. There is plenty of grain and there is never enough clarity and sharpness. It is better than vhs but is poor when compared to other new releases.
The sound was decent, much better than the picture and was of average quality but nothing special. This movie boasted no big sound scenes so the sound focuses on the score.
There were a few special features including a commentary and some deleted scenes. This wasnt a movie that I loved so the extras to me seemed dull although you may like them if you like the movie.
posted by dicanio on 5/3/2003 21:12