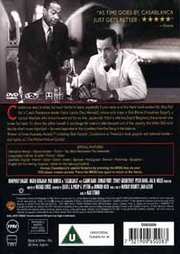 Back Cover of Casablanca
Related Items

DVD
Rebel Without A Cause (UK) 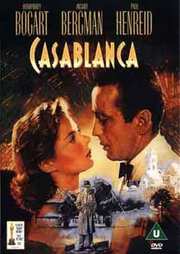 They had a date with fate in Casablanca!
Certificate: U
Running Time: 98 mins
Retail Price: £15.99
Release Date:
Content Type: Movie

Synopsis:
Casablanca: easy to enter, but much harder to leave, especially if your name is on the Nazis` most-wanted list. Atop that list is Czech Resistance leader Victor Laszlo (Paul Henreid), whose only hope is Rick Blaine (Humphrey Bogart), a cynical American who sticks his neck out for no one... especially Victor`s wife Ilsa (Ingrid Bergman), the ex-lover who broke his heart.

So when Ilsa offers herself in exchange for Laszlo`s safe transport out of the country, the bitter Rick must decide what`s more important - his own happiness or the countless lives that hang in the balance.

Winner of three Academy Awards including Best Picture, `Casablanca` is `America`s most popular and beloved movie - and rightly so` The Motion Picture Guide.

No not a great film, but a great example of a collaborative team effort. It`s all tied together by Michael Curtiz in a neat and craftsmanlike bundle. Effortlessly rewatchable, it has numerous imperfections, but nobody really cared very much as the dialogue was great and their is superb chemistry within the acting corps. I rented this one, but I can`t wait to purchase it as the print is highly satisfactory.
posted by Richard73 on 7/2/2001 20:37
8 / 10

Yes, I admit. Reviewing this disk was the very first time I`ve seen this movie. The first of many, I must add.
It`s so obvious why this movie is considered a masterpiece. It has everything - action, comedy, romance and even several historian references.
The acting is superb. Bogart and Bergman have an amazing chemistry and they deliver their lines beautifully.
The video transfer is amazing. The 1.33:1 transfer must`ve been restored. Otherwise there is no explanation as to how come a 60 year-old movie looks brand new. Ok, so a couple of scenes contain some grain and there are some 3-4 other imperfections in the original source (1-2 frames each, but nothing major), but the transfer does not show any compression signs, scratches nor dust particles.
The DD 1.0 soundtrack is very good. It is totally appropriate for a movie of that kind. The sound is clear of hisses, the dialog is clear and the music is a true classic.
The menus are animated with with the music ("As time goes by", of course).
The extras include an extensive featurette that takes you behind the scenes of this production while interviewing just about anyone who is still alive that had to do with the movie.
Bottom line - a true classic with a beautiful transfer. Highly recommended.
posted by Zvi Josef on 7/12/2001 00:06
7 / 10

A good film that is sometimes way overated. I also must admit that this was the first time I watched this movie. Nothing special really apart from the classic dialogue (Of all the gin-joints in all the towns in the world, she walks into mine) and the sweeping theme(As time goes by).

Its not a bad movie at all, Its just that nothing really grabbed me as being spectacular. Bogey certainly does have some on screen charm, being both very swift and very confident. I dont want to over-analyse this so i`ll cut to the chase, its a good classic movie that was big in its time and still has a little magic left in it.

The picture is black and white but is finely restored for this dvd presentation. Because its such an old movie, it is difficult to argue about the picture but I have seen far worse. This is a good transfer overall.

The sound is only a DD 1.0 ? There is no major quibble about the sound. I did think at some points it was a bit mute. Whether this was intentional or not I do not know, what I do know is that I could not hear parts of the dialogue without loudening my tv volume. I then have to lower the volume back afterwards. A DD 5.1 transfer would have been much better and for such a highly regarded movie, I would have thought that it would be worth the extra effort. Nevertheless we are presented with an adequate sound for this DVD.

Extras not much there I`m afraid. One trailer and documentary presented by lauren bacall about the movie and its greatness. The menus had the theme "as time goes by" which I found amusing. Pretty poor extras as this is supposed to be such a great movie.

Overall, Its hard for anyone really to say they hate this movie or do not like it because of its charm and appeal. Its a good movie but in my opinion not astounding. The dialogue is great and memorable. I certainly would buy this movie if the package was a bit better (fingers crossed for a Special Edition) but for big fans of the movie, this is worth getting.
Here`s looking at you kid !!
posted by dicanio on 8/3/2003 00:37
9 / 10

No one making 'Casablanca' thought they were making a great film. It was simply another Warner Bros. release. It was made on a tight budget ($950,000) and released with small expectations. Everyone involved in the film had been, and would be, in dozens of other films made under similar circumstances, and the greatness of 'Casablanca' was largely the result of happy chance. 'Casablanca' was just another studio main feature produced by Hal B. Wallis and directed by Michael Curtiz. The fact is that even if they had wanted to, they could not have set out to make 'Casablanca' turn out the way it did. It was a combination of elements and circumstances which produced a work of indefinable appeal which has endured for generations even though tastes and attitudes have changed. You don't set out to make a classic, you set out to make a film.

The story was from an unproduced play by Murray Burnett and Joan Alison, a play of no great consequence and written for the screen by the brothers Julius J. and Philip G. Epstein and Howard Koch. They struggled hard as studio hacks on assignment to get the script pages in on time, and did not plan for the fact that because the actors did not know how the film would end their ambiguous and edgy characterisations would be a major contribution to film folklore and debate ever after.

Humphrey Bogart was always best when he played the disappointed, wounded, resentful hero. In 'Casablanca' he is Rick Blaine, an American running a nightclub in Casablanca when Morocco was a crossroads for spies, traitors, Nazis and the French Resistance. Into this world comes Ilsa Lund (Ingrid Bergman), the woman Rick loved years earlier in Paris. ("of all the gin joints in all the towns in all the world, she walks into mine"). Under the shadow of the German occupation, he arranged their escape, and believes she abandoned him - left him waiting in the rain at a railway station with their tickets to freedom. Now she is with Victor Laszlo (Paul Henreid), a legendary hero of the French Resistance.

No better cast of supporting actors could have been assembled on the Warner Bros. lot - the richness of the characters, Sidney Greenstreet as Signor Ferrari, the corrupt rival club owner, Peter Lorre as Guillermo Ugarte, the wheedling little black-marketeer, Claude Rains as Captain Louis Renault, the police chief and Conrad Veidt as Major Heinrich Strasser the Nazis 'baddie'.

Stylistically, the film is not so much brilliant as absolutely sound, rock-solid in its use of Hollywood studio craftsmanship. Michael Curtiz, the director, and the writers Julius J. Epstein, Philip G. Epstein and Howard Koch all won Oscars, as did the film itself gaining Best Picture 1943.

The final touches to the legend of Casablanca were equally incidental. Musical director Leo Forbstein oversaw the hiring of Max Steiner and the selection of two songs `Knock on Wood` by M.K. Jerome and Jack Scholl and `As Time Goes By` by Herman Hopfeld to be performed by entertainer Dooley Wilson, still in the first year of his film career (Dooley Wilson was a drummer who did not play piano).

The film was critically and commercially successful, and after its release its cast and crew went on to their next films oblivious to the fact that as far as popular memory was concerned, they would always be associated with a nightclub in Casablanca.

The black-and-white cinematography has not aged and the dialogue is so spare and cynical it has not grown old-fashioned.

There have been two attempts to make a sequel to Casablanca, both times on television, both times a failure.

The DVD has been taken from the print that was created for the 50th anniversary (I think) therefore it is not quite up to the standard of today's restorations but is still very good and the presentation in 1.33:1 looks great. To be honest with such a well know and popular film you would hardly have expected Warner Bros. to do any less. The grading of the Black and White is excellent, with the black solid so that the contrast stands out wonderfully - it's the sort of film that shows how purest will argue that colour only takes away from the story. The Dolby Mono track is also very clean.

The featurette 'You must remember this' introduced by Loren Bacall is just a celebration of the film - rather than giving any insights; but it still worth a watch. The only other extra is the American trailer.

This is one of those happy chances where the script, actors, crew in fact everything just fell together to make a lasting film that deserved it's Best Picture Oscar.
posted by Tony Myhill on 3/4/2003 20:01