Review of Maltese Falcon, The
added by
RWB
Places to Buy 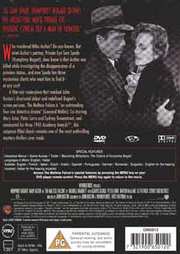 Back Cover of Maltese Falcon, The
Related Items

DVD
Rebel Without A Cause (UK) 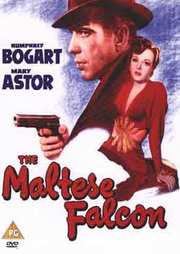 Synopsis:
Who murdered Miles Archer? No one knows. But what Archer`s partner, Private Eye Sam Spade (Humphrey Bogart), does know is that Archer was killed while investigating the disappearance of a priceless statue... and now Spade has three mysterious clients who want him to find it - at any cost.

Co-starring Mary Astor, Peter Lorre and Sydney Greenstreet, and nominated for three 1941 Academy Awards, this suspense-filled classic remains one of the most enthralling mystery-thrillers ever made.

these movies are so overrated bogart was always a plank anyway the picture is poor the sound worse and the bbc show it all the time anyway
posted by flair on 15/3/2001 15:27
10 / 10

One of the greatest films ever, what an atmosphere!

The picture quality is not as good as I hoped, it should be restored.
The sound is OK mono.

Film, like a lot of art is a very personnel thing, one persons masterpiece is the next persons load of … For me 'The Maltese Falcon' is the best private-eye story ever filmed.

Dashiell Hammett`s story of double-dealing and double crosses in the search for the 'black bird' had been brought to the screen twice before, (in 1931 as 'The Maltese Falcon' and in 1936 as 'Satan Met a Lady'), and was the directorial debut of John Huston, who had been a writer with Warner Bros., and was to go on to become one of the great American directors. The film is also memorable for the first Starring role by Humphrey Bogart; the first screen appearance of Sydney Greenstreet; and thereby the first pairing of Greenstreet and Peter Lorre.

All great films have to combine great acting, script and directing - John Huston did the script himself and the supporting cast were so good together that many of them were invited back to co-star in later Bogart films. Mary Astor plays Brigid O`Shaughnessy (or is it Wonderly, or Leblanc?), whose lies seem to mystify even her. Peter Lorre is Joel Cairo, the weaselly, effeminate little crook, who would sell his mother for the right price. Sydney Greenstreet is the fat man, Kasper Gutman, the urbane heavy (really heavy) imitated in about 200 movies since. Elisha Cook, Jr., plays the young-punk, whose felt hat and twin automatics are bigger than he is. Ward Bond and Barton MacLane are the cops, Jerome Cowan plays Spade`s partner, the dandy Miles Archer. Gladys George plays Archer`s wife, Lee Patrick is Effie Perine, Spade`s ever-loyal secretary and assistant and even the director`s father, actor Walter Huston, shows up in an unbilled bit part as Jacobi, a steamer captain, shot and still clutching the falcon in his dying grasp.

The object of all the mischief is (supposedly) a fabulous, jewel-encrusted statuette of a falcon that has had people cheating, stealing, and killing for over 400 years. Now, a new group of are after it, and their trail has led them to San Francisco and the investigative agency of Spade and Archer. Trust no one should be the byword of everyone in the story and the caution to anyone who watches the film. Lies, treachery, deceit, and murder are the order of the day as nearly all the characters in the film try to stab one another in the back in their greed for the bird.

As hard-boiled detective Sam Spade, Bogart is the quintessential antihero. He is a loner with no particularly noble ambitions or romanticized notions. When his partner is murdered, he shrugs it off as part of the job. Everyone knows the risks. When it comes to love and women, he is equally pragmatic.

The dialogue in Huston`s screenplay was taken almost verbatim from the novel - and the direction is assured and skilful so that viewers seldom notice the complexity of the set-ups or the length of some of the shots. (One shot in the hotel - going from room to room - is over 7 minutes). Some critics would tell you that Huston and 'The Maltese Falcon' created the film noir style so favoured by crime films of the later forties and fifties, that's hardly true, but the film did more than any previous film to popularise the style, with the film's city setting, frequently photographed at night, its murky shadows, and its grim, derisive attitude toward people and their motivations all influencing our perceptions of the story. The film`s vitality and pacing do not permit pondering the consequences of any one scene or action. Instead, we`re caught up in the pace of the film, pretty much swept along by its deeds, not even particularly saddened or surprised by the down beat ending.

Warner Bros. appear to have used the best copy of the film they could find to transfer to DVD and while it is excellent, it is not without its minor flaws. In general, the black-and-white contrasts are strong, the black tones, especially, almost always deep and solid. But there are occasional flecks and tiny intermittent scratches, and periodic secondary fading that remind us that this is not an absolutely pristine, digitally restored print. But why quibble. The picture quality is first-rate.

The Dolby Digital mono sound is also quite good for its age, coming up as well as could be expected. The dialogue is rendered crisply, and the background music, naturally restricted in frequency and dynamics, is nonetheless clear and persuasive.

The Region 2 extras are different from Region 1 - here all we have are a trailer and the documentary 'Becoming Attractions: The Trailers of Humphrey Bogart' which was made for the American Movie Classics channel. This is a look at the career of Humphrey Bogart as seen through the trailers for his films, showing the various ways his studio marketed him. It's an interesting idea, particularly for the film student.
On Region 1 there are a couple of other bits and pieces about private-eye films.

An indication of the enduring appeal of 'The Maltese Falcon' is the number of parodies there have been, films such as 'The Cheap Detective', 'The Black Bird' and 'Murder By Death' are just a few that come to mind.

For those who like films with great acting, dialogue and direction you will have to have this classic in your collection.
posted by Tony Myhill on 25/3/2003 18:10