Review of Heartbreakers
added by
RWB
Places to Buy 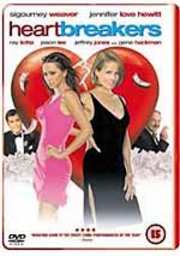 Synopsis:
Get ready to lose your heart - and your bank account - to a couple of sexy sirens in this "vastly enjoyable comedy" (People Magazine)! With a "fist-rate cast" (The New York Times) that includes Sigourney Weaver, Jennifer Love Hewitt, Ray Liotta, Jason Lee and Oscar® winner Gene Hackman, this hilarious laugh-riot is "smart and funny" (Joel Siegel, "Good Morning America")!

When it comes to conning millionaires, Page Conners (Hewitt) and her mother Max (Weaver) are real pros. Max lures them to the altar, then Page leads them into temptation…and a hefty divorce settlement! Now they`re about to strike gold with the ultimate sting: a wealthy, wheezing tobacco tycoon (Hackman). But before they can seal the deal, Page breaks the cardinal rule of the con and falls in love! Now Max must convince Page to hold on to her heart and the tobacco fortune…or lose the best partner in crime she`ll ever have!

Max (Sigourney Weaver) and Page (Jennifer Love Hewitt) are a mother and daughter team who specialise in conning gullible men out of extremely large sums of money. The con involves one of the pair, usually Max, seducing some poor unfortunate into marriage with promises of wild sexual encounters that never materialise, leaving the husband in a state of constant sexual frustration. Enter Page, who just happens to be drop dead gorgeous, to tempt the men into straying. At this point Max usually walks in to discover her husband in the midst of being unfaithful, thus netting the pair a large divorce settlement.

It seems like the perfect con, but after their most recent 'hitch and ditch', in which they ripped off shady used car dealer Dean Cumanno (Ray Liotta), they find themselves in a rather sticky situation. The IRS has seized all of their ill-gotten gains for non-payment of federal income tax. Even worse, the duo still owes the IRS a considerable amount of money. With the threat of a lengthy prison term hanging over their heads, they set off to Palm Beach in an attempt to reel in the biggest fish of their "careers", thus solving all of their monetary problems.

They set their sites on William B. Tensy (Gene Hackman), billionaire CEO of Tensy Tobacco, and a man with a serious health problem. While Max sets about ingratiating herself with Tensy (under the guise of Ulga Yevanova) Page decides to try her hand at some solo conning. It is while attempting to lure a mummy's boy millionaire that she meets bartender Jack (Jason Lee), to whom she takes an instant dislike. Of course all this changes when she find that he's loaded, and she goes to work on him in earnest.

Unfortunately for Page things don't work out as planned, and she finds herself falling for the likable Jack, something that seriously upsets Max. Matters are made even worse when a love-sick Dean turns up in Palm Beach looking for his ex-wife…

Heartbreakers should have been very good, but it's not. I can't quite put my finger on it, but it just doesn't stir anything inside of me. I don't hate it, far from it, but neither do I like it. It's just decidedly average. Performances are a mixed bag, with Ray Liotta's turn being about the most entertaining. His performance is reminiscent of his character in Goodfellas, albeit a definite 'PG-13' version. Jason Lee, most famous for his roles in various Kevin Smith movies, is likeable as Jack, but he never gets the chance to be at his acerbic best. Truth be told, Lee isn't a great actor, but he does have fantastic delivery for the sort of dialogue that he's usually found spouting in a Viewaskew production. Sadly, this isn't one such production. Sigourney Weaver and the terribly under utilised Gene Hackman seem to be going through the motions, while Jennifer Love Hewitt just isn't a particularly good actress. Still, she is mighty fine looking, and I guess that's all the talent she needs for a film of this nature.

It seems the main reason for this movie's existence is to showcase Jennifer Love Hewitt's breasts. Don't get me wrong, they are a fine example of that particular area of the female anatomy, but it's usually not a good decision to base an entire film on them (unless it's the sort of film that comes wrapped in a brown paper bag).

Heartbreakers is presented in its theatrical ratio of 2.35:1 and is anamorphically enhanced for your viewing pleasure. On the whole the image is good, with bright, vibrant colours and very few defects. However, the whole picture has a slightly unnatural look to it, and there seemed to be a greenish tint to some scenes (I`m assuming the film did not take place inside The Matrix). This detracted from the picture as a whole and is reflected in the marks below. While this is a competent transfer, it's not one of the best out there.

The Dolby Digital 5.1 soundtrack is fine, if not outstanding. Aside from musical cues and a few nice ambient touches the track doesn't make particularly good use of the rears, but then this isn't The Matrix so it's to be expected. Thankfully dialogue is always clear, while the music fits the nature of the film well. Like the video before it, this is a competent, if not outstanding effort.

Compared to the region one disc, us region two dwellers are getting completely ripped off. There's really no excuse for the poor extras on show here, especially when the region one disc features two commentaries, a number of featurettes, numerous deleted scenes with optional commentary and more.

What we get is decidedly less exciting. The best of a bad bunch is probably the "exclusive" interview with Jennifer Love Hewitt, in which she talks about all aspects of the production. It's ok as far as these things go, but it's certainly not going to make your pulse race (unless the sight of Ms. Hewitt alone accomplishes this).

Next up we have a number of theatrical trailers, TV spots and radio spots. Now while I quite enjoy theatrical trailers and TV spots, I consider them to be a novelty, worthy of one of two viewings at best. The fact that they're one of the main features on this disc speaks volumes. Even worse are the radio spots, which are basically just the same trailers minus the visual elements! I really don't want to look at a static poster while some bloke rambles on about a movie I've already seen.

Finally, we are "treated" to a stills gallery. This is another one of those pointless extras that are usually included to pad out a disc. However, in this case we are actually expected to believe that it adds some sort of worth to the package. Rubbish.

Overall then, an extremely poor selection of extras, with perhaps only one feature you'll return to. This shows nothing but contempt for region two consumers, especially considering the features available on the region one disc. All involved with putting this package together deserve a big slap on the wrist.

It's difficult to know what to say about Heartbreakers. There are some amusing moments, the performances are reasonable if mixed, audio and video are fine, and if you take the appalling extras out of the mix then it almost looks like a good buy. However, the film doesn't hold up to repeated viewings, and as such you may wish to rent rather than spend your cash. If you're a serious Jennifer Love Hewitt groupie and simply must witness the site of her in that pink dress, or a big fan of this type of movie in general, I'd advise you to go for the superior region one release.
posted by Chris Gould on 21/12/2002 01:23