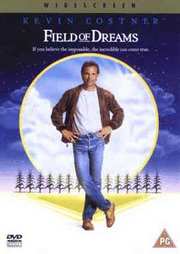 Front Cover of Field of Dreams 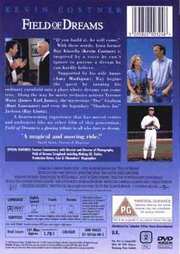 Back Cover of Field of Dreams
Related Items

Review of Field of Dreams

Let me make this clear, I love this movie. If ever there was a definition of a weepie for guys, this is it. But I have a major gripe with this particular release.

Please pay attention to the cover. It states clearly 1.78:1 anamorphic. Let me say that again ANAMORPHIC. However, unlike the varnish, it doesn`t do what it says on the tin. For your twenty notes, you get a letterbox transfer. But, just so you won`t accuse them of false advertising, they have made sure that the Universal logo is anamorphic. Why?

Like anyone else who likes this movie, I`ll keep the disc and hope they get it right with the next release.

Now for the big downer, the video. Field of Dreams has some impressive cinematography set in the wide-open spaces of the American Midwest, some beautiful skies and sunsets. Yet the letterbox transfer lets this down, also the colours seem exaggerated, even to a degree artificial. There are some artefacts also, especially macro blocking. I would say in between VHS and DVD.

Audio doesn`t fair too well either. A 2.0 Surround soundtrack is woefully inadequate to portraying James Horner`s understated and haunting score. Not so much orchestral as tinny.

The features are the redemption of the disc and ironically the worst advertised. I ask you, Scrapbook including making of. Who wants a Scrapbook? Allow me to elucidate. The Making Of is a 90-minute documentary, which is truly interesting. Interesting enough to make you want to watch it more than once. There are hundreds (yes hundreds) of stills from the movie, behind the scenes, and some deleted scenes. There are design sketches, storyboards and the entire script. (Not on DVD-ROM either) and there are profiles of two of the characters, the real-life "Shoeless" Joe and Archie "Moonlight" Graham. There are the usual Cast Biographies and the trailer. With Soundtracks in 4 languages and to cap it all off, a Director`s commentary, it seems that the quality of the film was sacrificed for the sake of the extras.

As I said, I love this movie. It takes a heavy dose of schmaltz, a lot of magic and a little suspension of disbelief and creates a wonderfully gentle tale of hope and reconciliation, that doesn`t fail to tug the heartstrings. It would have been easy to turn in a sugar coated happy pill, which would have been hard to swallow, but an intelligent script and some wonderful performances really make this film an "It`s a Wonderful Life" for the eighties. This was Kevin Costner before Waterworld and watching his performance makes you lament the lost potential. Burt Lancaster bring some old school charm to the proceedings. A wonderfully cynical James Earl Jones and an understated Ray Liotta help make this movie special. Watch out for the best performance by a child actor that I have ever seen.

Overall, a great film let down by presentation. If any title was begging for a two-disc release, this was it. I`ll be waiting for the anamorphic 5.1 DTS, superbit release.