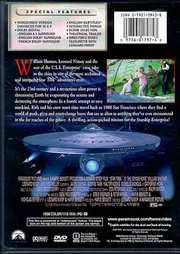 Back Cover of Star Trek IV: The Voyage Home 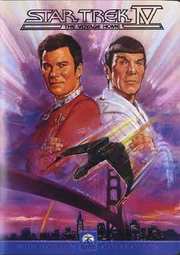 Synopsis:
William Shatner, Leonard Nimoy and the rest of the U.S.S. Enterprise crew take to the skies in one of the most acclaimed and intriguing Star Trek adventures ever.

It`s the 23rd century and a mysterious alien power is threatening Earth by evaporating the oceans and destroying the atmosphere. In a frantic attempt to save mankind, Kirk and his crew must time travel back to 1986 San Francisco where they find a world of punk, pizza and exact-change buses that are as alien as anything they`ve ever encountered in the far reaches of the galaxy. A thrilling, action-packed mission for the Starship Enterprise!

I very much doubt that anybody reading this needs an explanation of the storyline - suffice to say, it`s the one with whales. Leonard Nimoy`s second time in the director`s chair, but also starring and providing many a classic scene as Kirk and Bones try to help the character Spock `rediscover` himself after `going boldly` in that Fantasy Island blokes` Wrath.

Interesting to see Kirk Thatcher (Maggie`s lost son...always thought she was a fan), the Associate Producer, as the punk on the bus - playing his own song on the ghetto blaster.

Thank god Paramount seem back on the anamorphic bandwagon - the video quality of the Voyage Home is excellent! A nice clean up - you couldn`t really ask for better.

Sound wise - I can only comment on straight stereo - it certainly is loud. The music score and effects are extremely clear but dialogue occasionally got a little drowned out. Maybe it`s me, but occasionally it seemed almost as if there was an echo on some of the dialogue aswell. Not major criticisms and they certainly don`t detract from the fun.

For extras, the trailer is presented, also in anamorphic widescreen - now that`s a rarity! Languages are English or French. We also get the Paramount director`s short in full-frame - about 15 minutes worth, featuring some brief behind the scenes (the Bounty scene just before take off from Vulcan), and some pretty good footage on the making of the whale special effects. Just as it gets `good`, it`s over...come on Paramount, get with the program!! Take a look at Columbia, New Line, Warner etc for an idea about extras - they cater for the typical DVD buyer (young, male, anorak types - ok, me too!), and how many do you think are also into the good old sci-fi soap? Was there ever a franchise with more potential extras material?