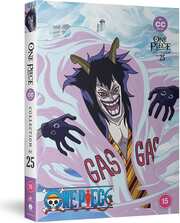 Review for One Piece Collection 25

At the end of last year, I had a brief whinge about the slow pace of One Piece releases in the UK, which has left us further behind the broadcast episodes now, than we were when Manga Entertainment started releasing the show back in 2013. I’m not under any illusions that anyone was paying attention, but this summer, Funimation UK (soon to be Crunchyroll) are giving us an epic injection of One Piece, one collection a month for three months, beginning with this April’s One Piece Collection 25. But there are still questions hanging, most notably what will happen to the releases from Collection 26 onwards? In the US, Funimation started releasing One Piece Collections as Blu-ray DVD combo packs. It’s a necessary development given that the industry is transitioning away from DVD altogether. But in the UK, Collections 26 and 27 have been listed as DVD releases, even though the package imagery online is the US artwork, complete with BD and DVD logos. I guess we’ll find out in May when collection 26 is released. Regardless, given the length of the One Piece series, it’s inevitable that we’ll be moving to Blu-ray as a matter of course, it’s just a question of when. 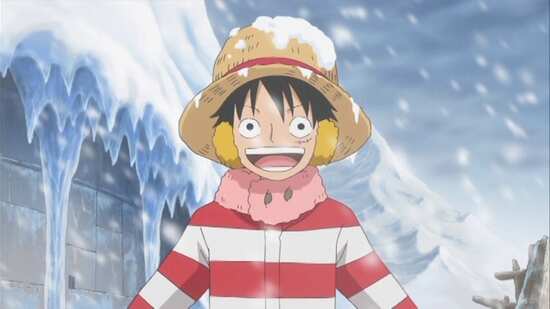 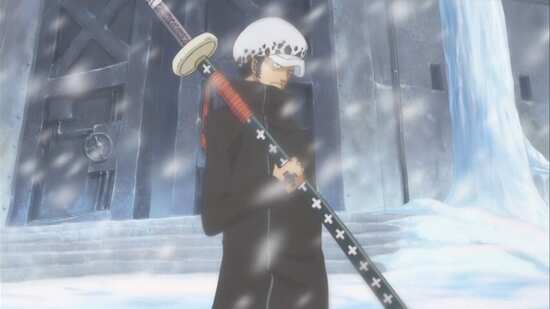 Previously on One Piece, Luffy and the Straw Hats had finally made it to the New World, and were confronted with a distress call from the island of Punk Hazard. They came across a bizarre island of fire and ice, and a whole heap of trouble, dragons, dismembered samurai, centaurs and chimera, and got caught up in the middle of a battle between Warlord of the Sea Trafalgar Law, and the Navy led by Smoker and Captain Tashigi. And it all revolved around a mad scientist conducting experiments on abducted children in a snowbound laboratory. Chopper, Nami, Sanji and Franky had liberated the children, but had their bodies swapped by Trafalgar Law, much to Sanji’s joy when he wound up in Nami’s body. Luffy wound up with a Samurai’s legs attached to his back, turning him into an honorary centaur. 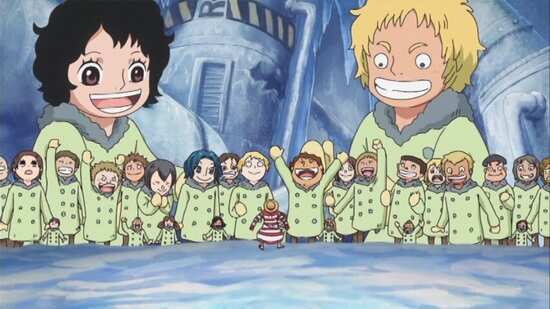 26 episodes of One Piece are presented across 4 DVD discs from Funimation UK. Episode 590 was a standalone special episode, crossing over with Toriko and Dragon Ball Z, and Funimation never licensed it, let alone dubbed it. It isn’t in this collection, and this isn’t the first time One Piece has skipped over a cross-over episode. 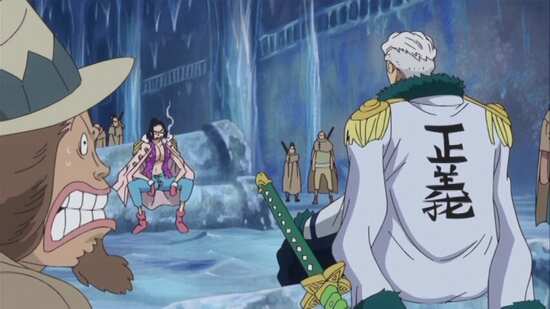 Disc 2
595. Capture M! The Pirate Alliance’s Operation Launches!
596. On the Verge of Annihilation! A Deadly Monster Comes Flying In!
597. An Intense Battle! Caesar Exercises His True Power!
598. A Samurai Who Can Cut Fire! Foxfire Kin’eman!
599. Shocking! The True Identity of the Mystery Man Vergo!
600. Save the Children! The Master’s Evil Hands Close In! 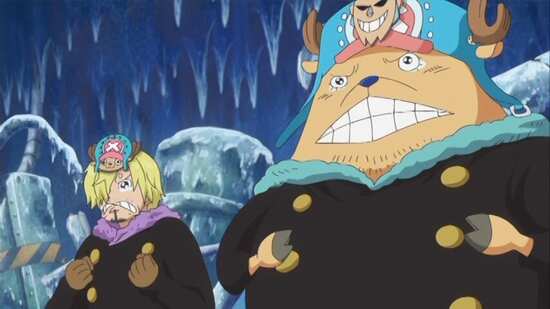 Disc 4
608. A Mastermind Underground! Doflamingo Makes His Move!
609. Luffy Dies From Exposure!? The Spine-Chilling Snow Woman Monet!
610. Fists Collide! A Battle of the Two Vice Admirals!
611. A Small Dragon! Momonosuke Appears!
612. A Deadly Fight in a Blizzard! The Straw Hats vs. The Snow Woman!
613. Showing Off His Techniques! Zoro’s Formidable One-Sword Style!
614. To Save Her Friends! Mocha Runs at the Risk of Her Life! 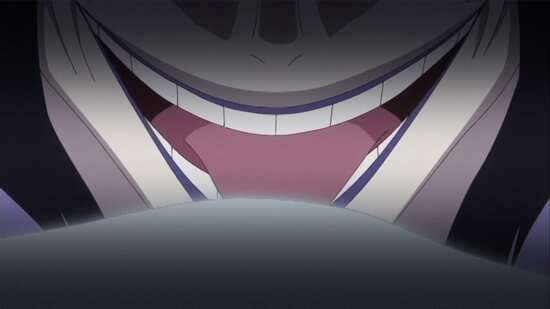 One Piece is presented at a 1.78:1 anamorphic ratio, and we get anime of the quality that we’ve come to expect on DVD in this high definition age. It is native NTSC encoded progressively; the image is clear throughout, and now obviously comes from an HD source, so improved is the line detail, although there is the odd moment of shimmer on the really fine detail. Colours are strong, the animation is vibrant, and there’s no more judder if you’re watching the show with progressive playback. There are still moments where the animation really takes a walk on the wild side, bringing to mind the wackiness of Tex Avery cartoons and the like. This is a show where surprise can make people’s eyeballs bug out of their sockets, and their jaws drop to the floor. 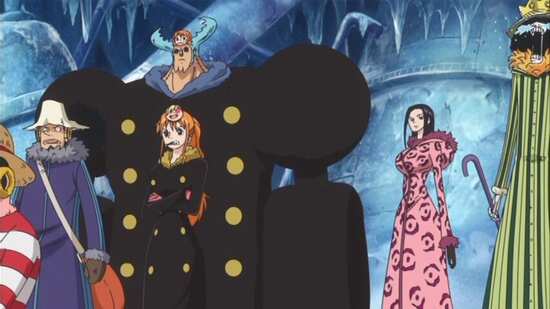 You have the choice of DD 5.1 Surround English, and DD 2.0 Stereo Japanese, with translated subtitles and a signs only track locked during playback. As usual, I watched the series through in Japanese with subtitles, and found a fairly standard shonen anime dub, with enthusiastic and over the top performances that suit the tone of the show well. The stereo does a good job in conveying the show’s ambience and action sequences. Where One Piece really impresses is in its music score. Far from the comparatively weedy synth efforts afforded to the usual anime shows, One Piece apparently gets a full on orchestral score, at times giving the show an epic and grand soundscape that by far belies its comic book origins. The subtitles are free of error and are accurately timed. There are English language text overlays burnt into the print. Any place where a new character or new location is introduced, text appears to inform us of it. 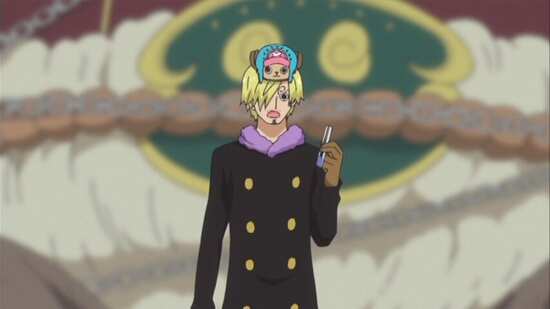 Note that the text captions aren’t translated in episode 592. Also, there are episodes where the chaptering is a little wayward, if you’re used to skipping the opening credits and previous episode recap to get to the meat of each episode. 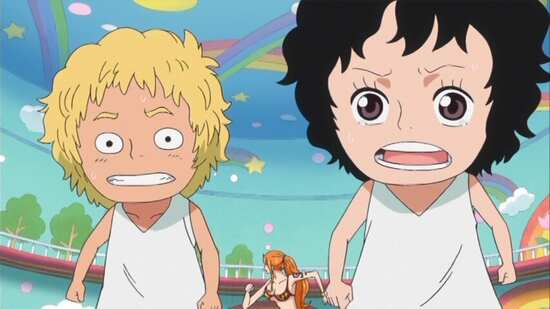 You get four discs in an Amaray style case, one on either side of two centrally hinged panels. The inner sleeve offers an episode listing.

The discs present their content with static menus set to the background music from the show. The episodes can be played with Marathon Mode, stripping out the credit sequences. The episodes get a few screens of translated English credits at the end. 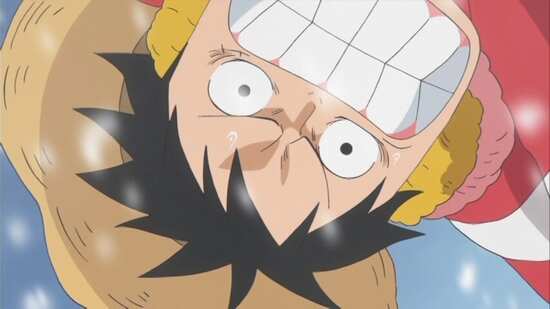 Disc 1 autoplays with a trailer for Dragon Ball Super.

Disc 2 autoplays with a trailer for One Piece: Episode of Skypiea.

You’ll find two textless opening sequences on this disc, but with Funimation now locking subtitles on One Piece, they are hardly textless anymore. 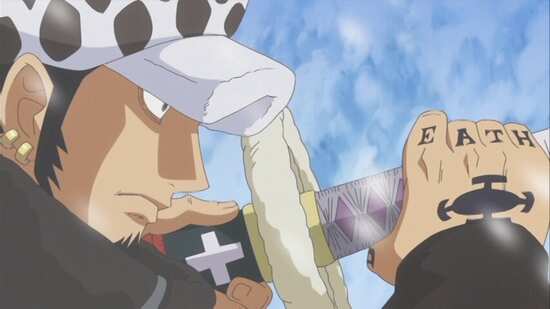 Disc 3 autoplays with a trailer for Doctor Stone.

Disc 4 autoplays with a trailer for Fire Force.

There is the second textless opening repeated here.

It seems the days of copious One Piece extras and commentaries from Funimation are a thing of the past. 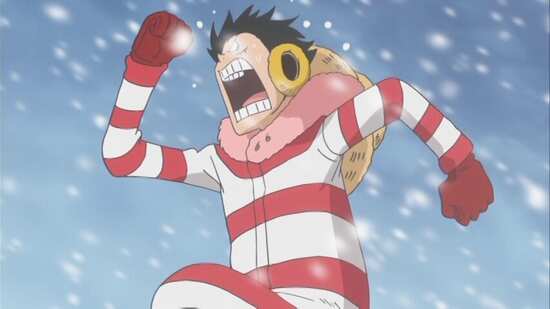 I look at these discs, the lack of extras, the lackadaisical chaptering and quality control when it comes to text translations, and I feel as if Funimation no longer care about their One Piece cash cow. The irony of this is that in the US, from the next collection of episodes, One Piece switches to Blu-ray and DVD combo packs. If it looks as if Funimation is going through the motions when it comes to the DVDs, then you could say that the story is doing the same thing at this point in proceedings. Certainly, in a long running shonen action show, you should expect formulae, tournaments and epic battles with powerful antagonists, with the protagonists levelling up, attaining and revealing new skills and powers. 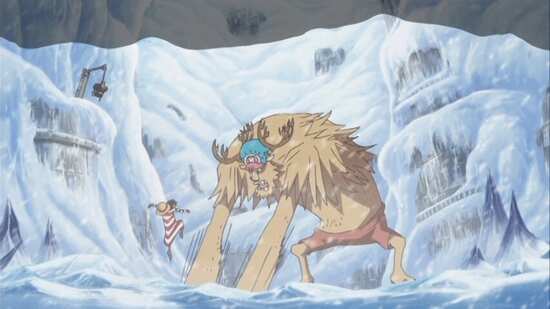 The Punk Hazard arc is no major departure from the One Piece norm, with the Straw Hats arriving on a new island or location, encountering new friends and new enemies, and winding up in a long series of fights and drama as they try to help their new friends, as well as survive long enough to get off the island and move on to their next adventure. There’s plenty of inventiveness when it comes to the new characters and their dynamics, as well as all of the new Devil Fruit powers that the antagonists bring to bear on our heroes. The new villain of the piece, Caesar Clown is particularly elusive and powerful when it comes to his Gas Gas fruit powers, existing as gas, and able to manipulate the atmosphere, removing the oxygen or turning it toxic at will. And it seems that the equally powerful Trafalgar Law is his ally. Luffy and his friends split up with their own particular missions, and all facing terrible odds, having to level up to succeed. And along the way, the balance of the conflict tips one way or the other, given how each battle seems to pan out. 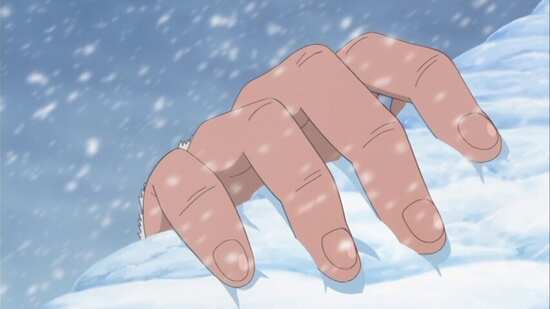 But in one, very significant way, the Punk Hazard arc is very different from what has come before. This is, despite the colourful and bright characters, the darkest that One Piece has gotten. Caesar Clown is the vilest antagonist that we have seen yet, and One Piece has brought some pretty nasty characters to the screen. Caesar Clown is a mad scientist who wants to create a poisonous WMD to surpass his mentor Dr Vegapunk’s achievements. To do this, he kidnaps children to use as his test subjects. He plies them with drugs and serums to induce rapid growth, fully aware that his experiments drastically shorten their lifespans. And he behaves like a friendly uncle to them, giving them plenty of candy. The candy contains a powerful drug that the children become addicted to, turning violent if they ever face withdrawal, ensuring that they never want to leave the Doctor’s good graces and his experimental laboratory. The child-catcher in Chitty Chitty Bang Bang is a saint in comparison. You can tell that that the Straw Hats will be particularly motivated to deal with this villain, and most especially the Straw Hats’ doctor Chopper. 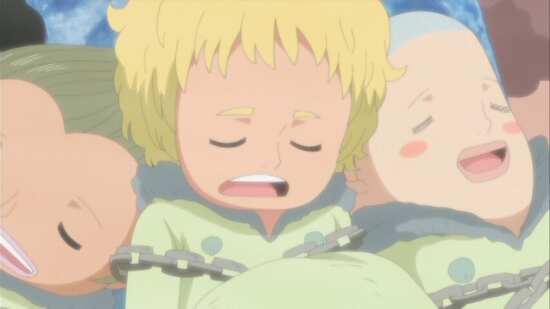 This story arc heads towards a conclusion in these episodes, but doesn’t quite reach it. In the previous collection review, I opined that Trafalgar Law was too powerful a character to deal with, but the writers solve this problem by introducing another, stronger antagonist who literally holds Law’s life in his hands. I also said that One Piece hasn’t quite been as emotionally engaging now that main cast of the characters’ back-stories have been told. That certainly continues to be the case with this collection of episodes, as the Punk Hazard arc is entertaining, but not inspiring. Funimation’s presentation of these discs feels like they’re going through the motions, and spoiler (now that I’ve had a delivery); while the US got One Piece Blu-rays from Collection 26, we in the UK won’t get them.