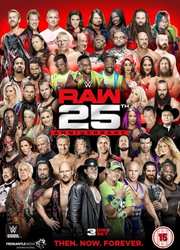 Raw is WWE's flagship TV show and one that has been produced every week for twenty-five years. During this time we have seen many changes, from the fall of WWE under the wake of WCW and the nWo and Nitro, the rise of the Attitude era and stars like DX, The Rock and of course Stone Cold Steve Austin. It is a show that has had many memorable moments and this set includes the celebration show that WWE produced as well as including a number of extra and the Top 25 Raw Moments show.

The show itself is a little hit and miss. I wish that WWE had ignored the storylines that were going on at the moment and just have vignettes, promos and clips from the past. Instead, we have a bizarre mix of a trip down memory lane, but also trying to promote the upcoming Royal Rumble PPV at the same time. Because of this, though there are some great moments, the moments are few and far between.

Going back to the original setting at the Manhattan Centre was pretty good, as well as seeing the old Raw set. Some of the vignettes were entertaining, such as Jericho and Elias, The APA doing what they do best and that's drink and gamble. However, at times it just felt like they were throwing everything on the screen to see what would work without thought on quality. What we end up with, as I say, is just a lopsided show.

The three disks really piles on the extras when it comes to celebrating this milestone. Pre-Show is nearly forty minutes of a build up to the Raw 25 show and if I'm honest is the reason why I very rarely watch the pre-shows. This was just overkill and though it did feature some great sections I often feel that this should be ten-fifteen minutes tops.

Raw includes a number of extra sections including The Miz interrupting The DX/Kliq and Balor Club only to be interrupted by Seth Rollins. This was pretty good and I can understand why it wasn't shown with Rollins' referring to his Ring of Honor title win. It is a shame that The Miz is not used as great as he was here.

Legends Taking Manhattan is a quick and by quick I mean less than four minute look at the backstage creation of the Raw 25 at the Manhattan Centre and interviews with some of the Legends who appeared.

They include the full Top 25 Raw Moments that was created for the show and I must say it was good, just far too many missing. Yes some were iconic such as 123 Kid beating Razor Ramon, Eric Bischoff debuting, Nitro being bought by WWE (or Shane McMahon), This is Your Life! Rock which on watching it back as a highlight reel is great, but watching the whole thing is tough.

There is also Tyson meeting Austin, debut of Mr Socko, Austin's first stunner to McMahon and obviously the Austin Beerbath which I don't think anyone will argue is the greatest Raw moment.

It is odd that they don't include the full match of Randy Orton against Jeff Hardy which was Number 13 and yet include many of the long promo pieces in full? Thankfully they do include Mankind's title victory in full. They also include the amazing Trish Stratus against Lita match which was the first time a women's match had ever main evented a Raw and shows that the Women's Revolution didn't start with Charlotte and Sasha Banks.

It was surprising they included the fan reaction to Roman Reigns after he defeated The Undertaker at Wrestlemania which showed just how much the fans hated him with so many negative chants including 'Go Away' and if this had been Reign's heel turn it would have been epic. I was also surprised that they included CM Punk's Pipebomb promo.

There are a few missing such as the Three Faces of Foley promo and debut of Cactus Jack against Triple H, Joey Styles 'Extreme' promo, Highlights from The Owen Hart Memorial show would have been great, Stone Cold throwing the Intercontinental Championship in the river, the invasion of the original NXT faction destroying the WWE set, John Cena against Shawn Michaels in their Hour Long match would have been great to relive and certainly one of the best matches on Raw.

Raw 25th Anniversary is an unnecessary set, but I understand why WWE would want to honour the milestone. If the focus had been more on the milestone and not on 'Business as Usual' with promoting the matches, feuds or PPV it maybe could have been a better all round show. However, if you want a look at some of the best moments from Raw then this is a good set, though if you have the previous Top 50 Raw Moments set, you might find it a little less Raw and more undercooked.