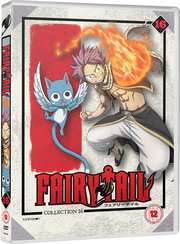 Another month means another edition of Fairy Tail to review and enjoy. We’re in the Magical Games tournament arc, which sees various guilds compete to see just who is the strongest in the land, and after seven years in limbo, the strongest members of the Fairy Tail guild have their reputation to restore. The previous collection was all about the games, it saw the best and the brightest, the worst and the darkest all competing, with a whole lot of action and comedy. That did mean that the overarching storyline, the mysteries and conspiracies behind the tournament were somewhat forgotten. But as the games draw to a close, it’s Part 16 of Fairy Tail where the story will get serious once more... 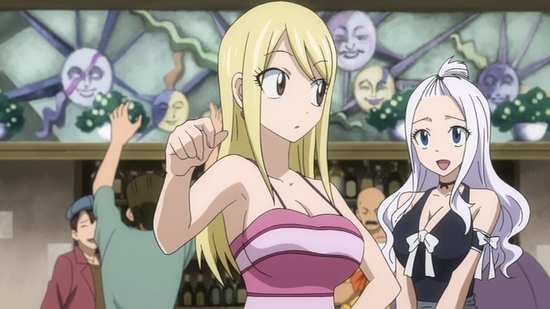 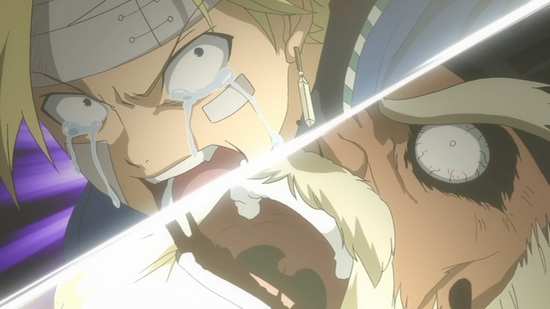 Funimation release the next twelve episodes of Fairy Tail across two discs. The Tenrou Island arc concluded with the strongest members of Fairy Tail trapped in a bubble of time for seven years. When they finally returned to Fiore, they learned that the guild had declined in its fortunes and reputation in the interim, that Fairy Tail was now the weakest magical guild, and the new Sabertooth guild ruled the roost. They also learned that a new annual Magical Games tournament had been created to allow guilds to increase their standing, without having to do missions or pick fights. As this collection begins the Magical Games are coming to a close. Raven’s Tail have been disqualified, and Fairy Tail look to claim their rightful standing as the strongest guild. But that won’t happen if Sabertooth have anything to say about it. At the same time, the truth behind Project Eclipse is about to be revealed, and it might just make all this posturing and guild competition meaningless. 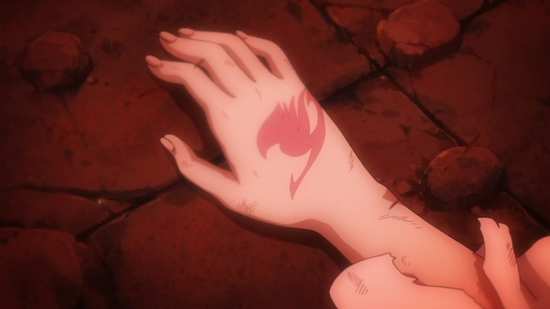 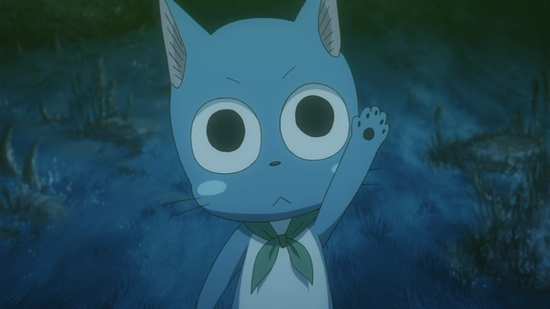 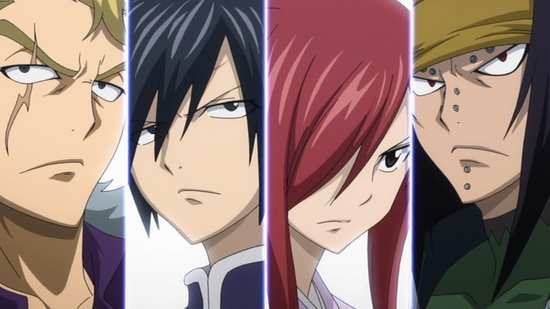 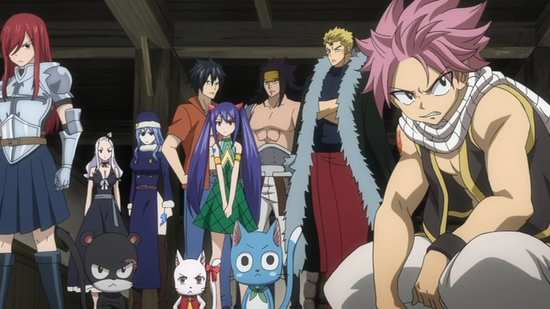 Disc 1 autoplays with a trailer for Free.

There is an audio commentary for episode 177 with Mallorie Rodak (Yukino), and Major Attaway (Arcadios).

Disc 2 autoplays with a trailer for Noragami.

Guild Pride: Sabertooth lasts 7:01, and is a redundant guide to the eponymous guild if you’re watching the show, and wholly meaningless if you aren’t. 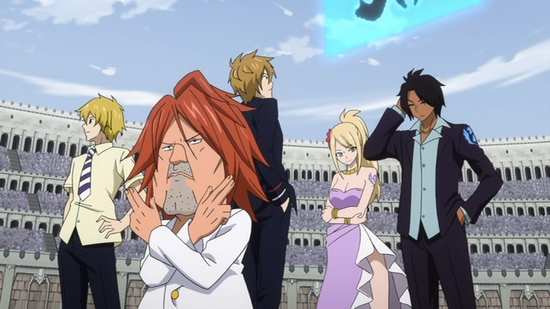 You get the textless credits, the US trailer for this volume, and further Funimation trailers for Inari Kon Kon, 009 Re:Cyborg, Space Dandy, Soul Eater NOT, BlazBlue: Alter Memory, One Piece, Fairy Tail Part 17, and the Fullmetal Alchemist Blu-ray. 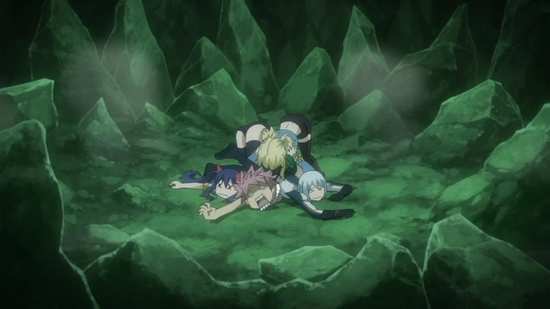 In long running shonen anime such as this one, there is a fine line between making the most of a story, and deliberately delaying viewer satisfaction. Most shows tend to ignore the line and stretch things out willy-nilly, aping the granddaddy of them all, Dragon Ball Z, which turned a 6 minute countdown into 30-odd episodes. But to date, canon Fairy Tail has erred on the side of brevity, not allowing a story element to outstay its welcome. Well, in Part 16, it crosses the line, and much as I enjoy canon Fairy Tail, as much as I appreciate spending time with these characters, this time I was looking at the clock, wondering when it would get to the meat of the story. It doesn’t get to the meat of the story in Part 16, although it does continue the work of building things up some more. 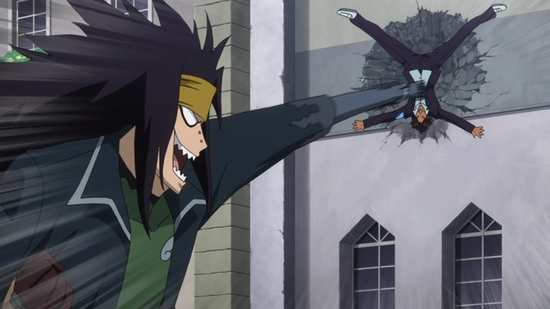 Part 15 ended with the final day of the competition imminent, and an episode 175 epilogue that indicated a return to focus for the main overarching storyline and conspiracy. Part 16 ends in the middle of the final day of the competition, and with some more indication as to what the conspiracy is about, but no sign that the endgame of this arc is about to begin anytime soon. 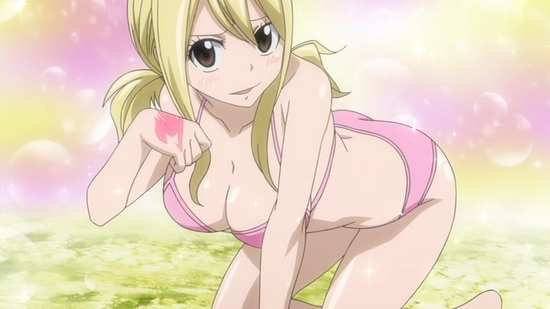 This collection follows on from the previous showdown between Natsu and the two Sabertooth Dragon Slayers, with Gajeel taking Natsu, and Wendy and the others to what he found during that battle, an extensive dragon graveyard under the city. This leads to a reveal about the history of dragons and of Acnologia (the big bark of a dragon that forced the Fairy Tail guild into suspended animation for seven years), a reveal that is interrupted when they are detained by Arcadios, who himself adds to what is going on, explaining what the Eclipse project is, and how they plan to use it to defeat Zeref. Given that Celestial Wizards are key to the Eclipse project, Lucy gets taken into custody, with the promise that she’ll be released if Fairy Tail wins the magic games. 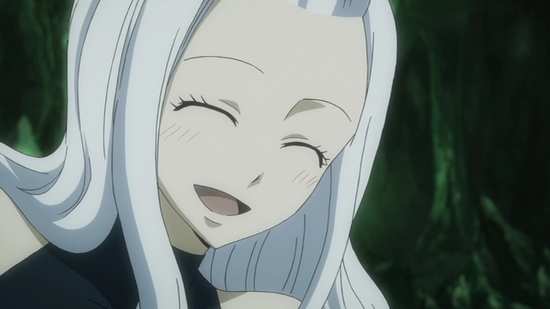 A promise like that can hardly be trusted, so Natsu gets swapped out of the Fairy Tail team for the final event, a team survival game taking place in the city, with all of the guilds battling to take each other out, amass points and try to win the first place. While Laxus, Gray, Juvia, Erza, and Gajeel do battle in the games, Natsu, Wendy, Mirajane, Happy, Pantherlily, and Charle, try to sneak into the castle to rescue Lucy, although they get into far more trouble than they bargained for, when they are caught in the act, and thrown into the labyrinth under the castle, where they have to do battle with the King’s Executioners, the Hungry Wolf Knights. 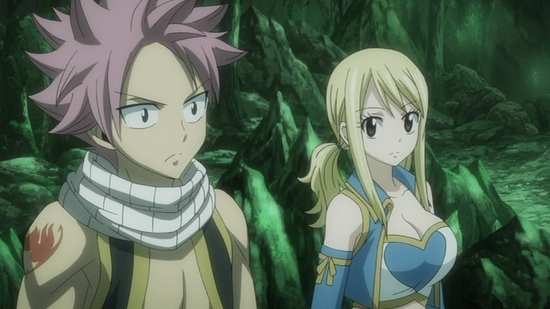 So we have brutal action up top in the finals of the games, interspersed with brutal action below in the labyrinth, and all the while we get more and more glimpses of what the whole conspiracy is about, the true nature of the Eclipse Project, and a mysterious cloaked figure who gives Jellal a shock, but whose identity becomes obvious long before the reveal, given all of Charle’s ominous premonitions and the revelation that the Eclipse Project regards time travel. 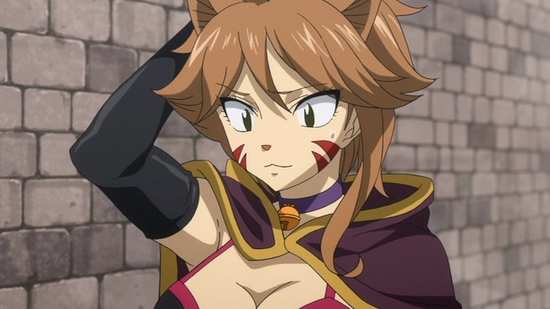 This is still the good Fairy Tail canon that I love, as opposed to the filler which I don’t. It’s got great action, delicious comedy, and it has the oodles of heart that makes me care about all of the characters in the show. But Part 16 also had me asking when it was going to get to the point, which you should never have to ask in a show like this, lest it turn into Naruto’s Fourth Ninja War arc. Thankfully, the trailer of Part 17 on the second disc indicates that big changes are afoot in the Fairy Tail universe, and it will indeed get to the point in the next collection.