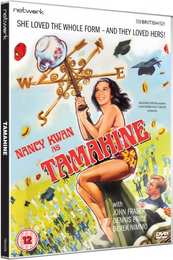 I’d never seen or heard of ‘Tamahine’ until now. As part of their relentless British film release programme, Network have unearthed a number of little-seen gems and for my money, ‘Tamahine’ (despite its flaws) is among them.

Although this isn’t a Boulting brothers comedy, it feels like part of the oeuvre. Quintessentially British, putting an outmoded, staid and fading way of life under the microscope by viewing it through the eyes of a pretty but primitive Polynesian native girl.

It’s an incredibly dated film in more ways than one, and some may find some of its themes and approaches patronising in the extreme, but if viewed in the context of its time, it’s actually a charming, gentle comedy which deserves its place in the canon.

Made in 1963, its original working title was ‘The Natives are Restless Tonight’ which is a fun title as it suggests that the natives are not the Polynesians, as you might think, but all the young public school-boys and their masters. Its strap-line on release was the rather salacious, “She loved the whole student body...and they sure loved hers!!!” which might actually promise a bit more sauciness than the film delivers.

It’s a light and breezy comedy film directed by Philip Leacock which starred Nancy Kwan in the title role as a young Polynesian woman who is transported from her primitive and simple life to France and then Britain. Kwan was something of a pin-up girl at the time, exuding exotic oriental charm. Before landing the title role here she had enjoyed great success in the film adaptation of The World of Suzie Wong (1960) three years earlier.
She is ably supported by a brilliant cast, most notably the always brilliant Dennis Price (who famously played Louis Mazzini in the film Kind Hearts and Coronets (1949) as well as appearing in countless British greats including many Boulting brothers films) and Derek Nimmo (‘Oh Brother!’) who is always good value as an upper-class ass. John Fraser (The Dam Busters, El Cid) also stars as the romantic lead who falls in love with Tamahine, supposedly a school-boy despite being in his early thirties at the time and looking very much like it!

When her father dies, orphaned teenager Tamahine (Nancy Kwan) is sent from her Polynesian island to live with her Father’s cousin, the terribly staid Charles Poole (Dennis Price). Poole happens to be the headmaster of Hallow (‘Harrow’ anyone?), a prestigious public all-boys school, steeped in tradition. (Much of the filming actually took place at Wellington College where pupils were paid the then princely sum of 30 shillings a day each as extras).

Richard (John Fraser), Poole’s son and a pupil at the school, falls in love with her but she thinks, as they are related, no matter how distantly, that it must be wrong to get involved.

In the meantime, the whole school seems smitten with Tamahine; particularly an art teacher (Derek Nimmo) who makes an ass of himself by inviting her to sit for him. She begins to un-robe, seeing nothing wrong in being naked and Nimmo’s reaction is predictably comedy gold.

There are plenty of other great comic moments which expose the hypocrisy and stupidity of British tradition, like Tamahine’s innocent questioning about the army where she is wondering how killing people is a good way to keep the peace. Naturally Poole is a bit perplexed. Indeed, she even manages to get behind Poole’s somewhat iron and emotionless façade (played out wonderfully in a scene with his daughter where he cannot express any emotion other than to write her cheque, protesting that he’s British!).

Meanwhile, Richard works on his new found love to such a degree that, and with her knowing that a union would be both legal and acceptable in British society, he persuades Tamahine to marry him. He soon settles down to a life like his father’s as a tutor at the college with Tamahine in tow – all right and proper and raising a daughter of her own. In the meantime, art teacher Clove decides to move to a foreign land with Diana, Poole’s daughter and Poole himself decides to head off for a new life on Tamahine’s native island to commune with nature and father some more children with the willing native girls!

It’s all great fun and it’s notable that the film earned a BAFTA nomination for Geoffrey Unsworth, the double-Oscar winning cinematographer whose credits include Cabaret, Tess and 2001: A Space Odyssey. Filmed on location in England, Paris, and Bora Bora, as well as Shepperton studios, it’s a great looking period piece.


If you like fun, bubbly fifties British comedies (despite the fact that this heralds from the sixties) then you’re going to love ‘Tamahine’.