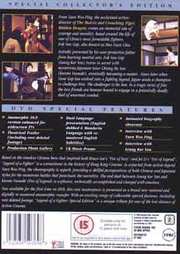 Back Cover of Legend of a Fighter
Related Items

Legend of a Fighter (UK) 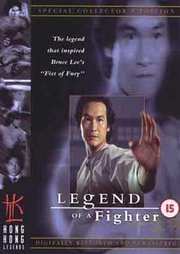 Synopsis:
From Yuen Woo Ping, the acclaimed action-director of `The Matrix` and `Crouching Tiger, Hidden Dragon`, comes an immortal tale of courage and morality, based around the life of one of China`s most formidable fighters, Fok Yun Gap, also known as `Huo Yuan Chia`.

Initially prevented by his over-protective father from learning martial arts, Fok Yun Gap (Leung Kar Yan) trains in secret with mysterious Japanese tutor Chiang Ho San (Kurata Yusuaki), eventually becoming a master. Years later when Yune Gap has evolved into a fighting legend, Japan sends a champion to challenge him. The challenger is Ho San. In a tragic twist of fate the two friends are honour-bound to engage in a potentially deadly duel of unarmed combat.

This is a true lost classic. Some really good extras.

Intro:
Leung Kar Yan - who never trained in Martial Arts has given a excellent performance and the philosophy is just like what Bruce Lee had taught.
All actors were good in the film but I have to credit Leung Kar Yan and Yusuaki Kurata.

The choreography from Yuen Woo Ping using Wing Chun I thought was great - Yuen Woo Ping had followed his father`s (Yuen Siu Tien - `Begger Su` from Drunken Master and `Pak Chiang Tien` from Snake in the Eagles Shadow) footsteps from an actor to a director and Action choreographer in `The Matrix` and `Crouching Tiger, Hidden Dragon`.

The Film:
Legend of a Fighter is about the Chinese hero, Huo Yuen Chia(aka Fok Yun Gap) the youngest son of the family, who returns to his father asking him to teach him Kung Fu but refusing to do so as the Family don`t teach the weak/cheats/strangers and only allow family to watch them practice.

A teacher - Chiang Ho Shan, comes to educate him and it turns out and during his time, he secretly looks at their style and reveals to Yuen Chia that he is a Kung Fu expert. He leaves China and leaves Yuen Chia his manual of Kung Fu and studies secretly under his father.

When discovered that he had trained Kung Fu (after being challenged by an Eagle Claw Master) - Yuen Chia is made successor of his father.

China is challenged by a Russian Boxer and he is well known before and defeats him but then a Japanese fighting expert closed down Martial Arts schools in China - He goes to challenge the Huo family and Yuen Chia defeats him. After being defeated - He kills himself and the Japanese want revenge.

A Japanese fighter that turns out to be Yuen Chia`s teacher would fight him and for Chinese to absolve themselves, Yuen Chia would represent Chinese Kung Fu and will be a `fight to the death.

This film has a connection to Bruce Lee`s Fist of Fury when he played `Chen Jen` the student of Huo Yuen Chia.

The Picture:
The film has been cropped to 1:78:1 from the original 2:35:1 picture but given an anamorphic transfer. The cropping - not too distracting as the film is mainly framed in the middle.
However, this movie is over 20 years old and it looks pretty good. HKL had worked a while in to restoring this film and the negatives were in an appauling condition as other `Seasonal Films` like Drunken Master and Snake in the Eagles Shadow, It is almost grainless but the contrast seems a bit low.

The Sound:
English dubbed and Mandarin are offered here. The Mandarin Track is acceptable with a bit of hiss and I did notice a few things:

(1) The fight-scene on the boat with Fong Hak On - The volume seemed to `burst` out.

(2) At the end when Yuen Chia is on his knees after killing his teacher - The English dub has him say what was said on the Mandarin track (it has happened in Eastern Condors when Yuen Biao is taken away).

(3)Again, at the end - it sounded like HKL re-recorded the music because it was different to the Mandarin. - I heard a rumour that that a 3rd of the English dub was lost some HKL had to get it re-dubbed.

I prefer the Mandarin because I like hearing the original versions but the English dub was quite funny but it did have quite a lot of swearing.

Subtitles:
English subs are offered here with no grammer errors but they seem a little westernized but what was annoying you can`t turn the subs off during the film and had to go to the Languages menu but they are removable.

Extras:
Trailers - one from HKL which shows the action.
Original Theatrical trailer which includes rare deleted footage of Huo Yuen Chia fighting a westerner with a fencing foil and it is special to have - it also shows evidence of the 2:35:1) the film looks cleaner but I like the trailer`s picture.

Text Biographies for Yuen Woo Ping and Leung Kar Yan (mute the TV if you don`t like the American Voice man).

A photo gallery which to be honest is not an worthy extra.

Interviews with Leung Kar Yan discussing about how he became an actor and his relationship with Sammo Hung.

Interview with Yuen Woo Ping recorded about 1993 (this is the same interview HKL use for their DVDs).

Trailers for other HKL releases.

This film was lost and HKL gave it a good DVD release.
Buy this movie - It is one for your Martial Arts Collection!