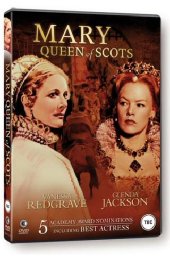 DVD
Man in the Iron Mask, The (UK)

Blu-ray
Next of Kin
Related Articles 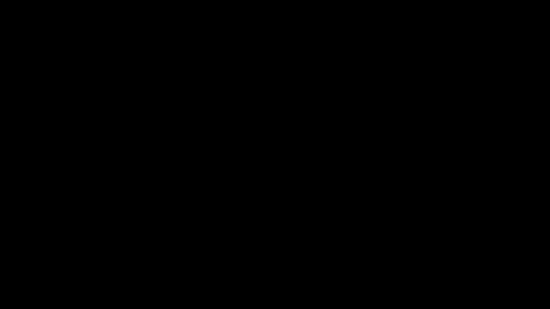 This historical larger-than-life drama about the clash of queens begins with a blank screen. We then hear the gradual build of an ostentatious orchestra. You begin to tap your fingers. It's epic, catchy, romantic and bombastic. The kind of music you would hear as you were entering the gates of heaven. There is still no picture. When a movie starts like this (before knowing the title or even the cast), you know what the defining element will be. This tremendous tune by composer John Barry invades our senses. It sets us up for the elegant dream-like prologue of a wistful romantic couple absconding from a castle into a finely refined garden then rowing down a river with swans. It's all so quaint. Like a dream. A singer sings a song in French about something sweet and starry-eyed. They are in love. All of a sudden, the man screams with pain - Aghhhhhh! Taken to the castle we find out this is the King of France. He dies. His beautiful blonde wife in white with her hypnotic blue eyes and angel-like skin goes back to her homeland to fulfil her position as… 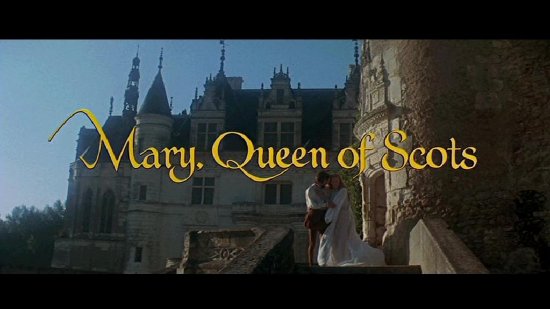 The conflict of Mary, Queen of Scots arises when Mary (Vanessa Redgrave) returns to her fair land to take her crown. The Queen of England, Elisabeth (Glenda Jackson) is paranoid that Mary will take the crown of England. Quarrels ensue. Mary wants to be friends. Elisabeth is angry. The nobility want Mary to be queen of England. Elisabeth will do anything to keep her authority. The ruthless-bitch fears rebellion. Everyone lusts for power. She needs to protect her position. A division lives between Scotland and England, between Catholics and Protestants.  Mary inhabits a demented world of two-faced plotting, megalomania and tyranny. The majestic Mary has no chance against the evil of Elisabeth. To her, people are mere pawns on a chessboard. It's a classic example of black vs. white, good vs. evil. 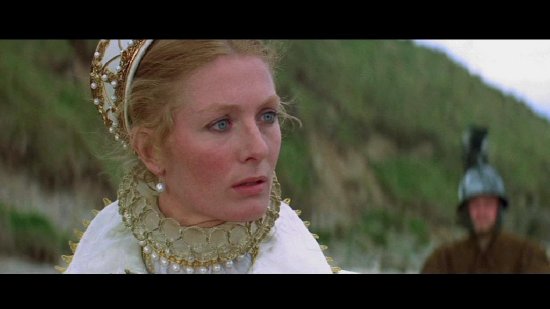 Frivolousness aside, the real story of Mary, Queen of Scots is more complicated than this. In the movie, it's a black and white soap opera with a tinge of historical implication. It is true that England was an insane place 550 years ago - our past: twisted, perverse and cruel. However, it's also well-known that filmmakers misconstrue history (look at Braveheart [1995]). With not knowing a great deal about English history or early creed, writer (John Hale) and director (Charles Jarrott) could have re-invented fortune and failure of times gone by. That's why it's vital filmmakers should have an unspoken obligation to 'truth'. But then again truth is a subjective matter. It's difficult not to look at our history with stain and distaste when you consider this movie. However remarkable this conflict between Mary (catholic) and Elisabeth (protestant) may be you have to take it with a pinch of salt. For example, historians have said that Mary and Elisabeth never met. Regardless of this fact, we have a sequence in Mary, Queen of Scots in which they do. Artistic licence by filmmakers, after all, is justified, who said they didn't meet (it could have been in secret and stuff and nobody wrote about it in history books). It's a shame that dim-witted people like me perceive history through movies. 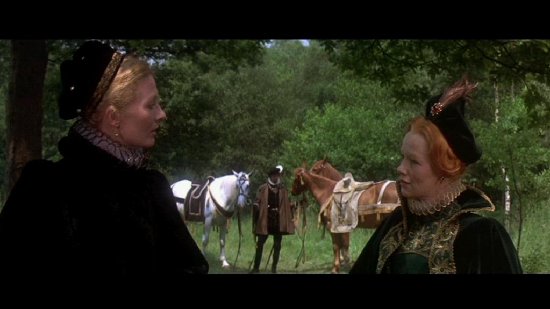 Once you get past the mind-bending historical aspect, you should enjoy Mary, Queen of Scots for its undiluted entertainment. The cinematography by Christopher Challis (who worked on Chitty Chitty Bang Bang [1968] and Tales of Hoffman [1951]) is exquisite. The colour of the countryside against the hoary of ancient castles is spellbinding. No matter how many adjectives you use to describe the look of Mary, Queen of Scots, it's implication should be felt rather than referred. After all, a picture is worth a thousand words… 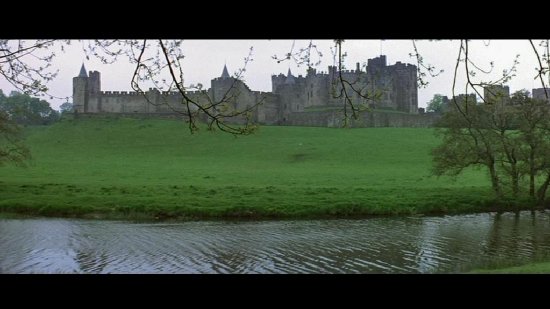 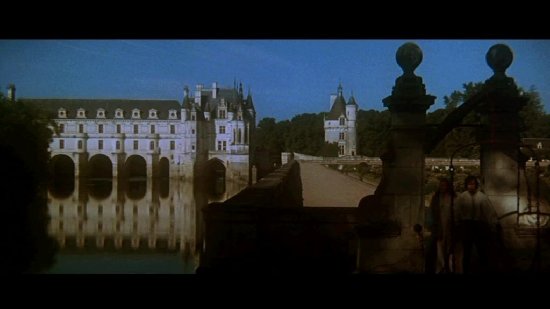 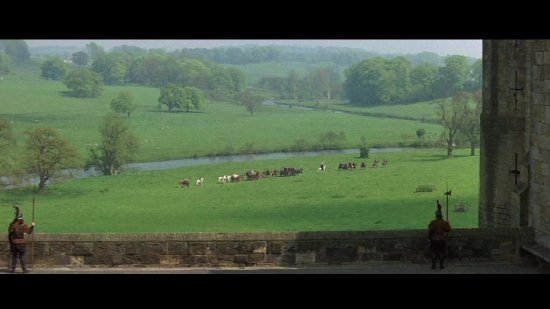 The soundtrack is the significant 'stamp of approval' and a perfect example of when all the pieces matter. It helps to create the tone, texture and atmosphere of the movie. It's one of John Barry's most sublime and sanctimonious scores. Can you think of another movie that takes an intermission halfway through so you can hear the score? Even though John Barry's music and the cinematography by Christopher Challis overshadow the cast, it would be a crime against cinema to disregard the drama in Mary, Queen of Scots. With names like Vanessa Redgrave, Glenda Jackson, Patrick McGoohan, Timothy Dalton, Nigel Davenport, Trevor Howard, Ian Holm and Daniel Massey, you know you've seen something special. 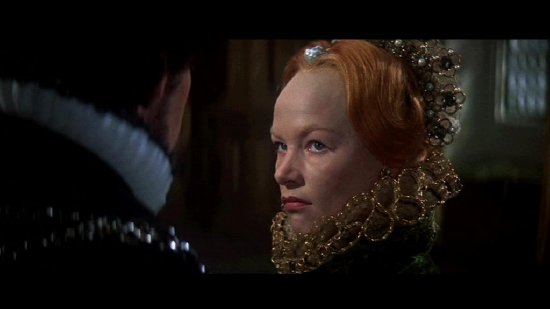 Special Features: The isolated John Barry score with commentary by Nick Redman and Jon Burlingame is a 101 lecture on film music, 'music has to speak and say something important. If it's constantly speaking you don't hear it anymore'. Considering that the score for a 126-min movie is only 47-min, you can appreciate this sentiment. They go onto say, 'music is about creating emotion'. Barry has delivered this by the bag load.

Disc: If you have any queries about the picture quality, just look at the screen grabs - you would never believe this movie was 40-years-old. 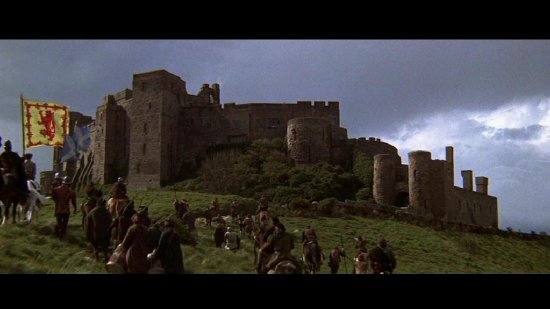 Verdict: Ignore the historical milieu and embrace the grace of the starry-eyed cinematography, the thespian drama, the soap opera virtues and the splendour of John Barry's score and you will find Mary, Queen of Scots irresistible. A cordial classic. 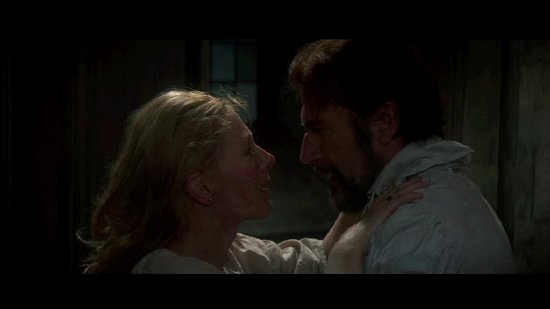