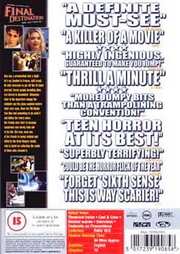 Back Cover of Final Destination

DVD
Space: Above and Beyond - Complete Series Collector's Edition

DVD
One, The (UK)
Related Articles 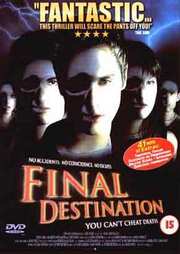 Synopsis:
Alex has a premonition that a flight he`s on, headed to France, will crash. He tells everyone to get off the ill-fated aircraft. Seven people including Alex, are forced to disembark. Moments later in the departure lounge the students see the plane explode before their very eyes.

Now the FBI thinks that Alex had something to do with it and follow his every move. His friends also start to become suspicious and slowly fade out of his life. But now, each one of his friends is being stalked and killed by the Grim Reaper, Death, who is intent on collecting the souls of those who cheated it.

Includes two games as extra features: Your Psychic Eye, and Death Watch, which cheerfully tells you the date your going to die!

this outscares scream.it grossed more in the uk than scream 3 and deservedly so.the darkside tends to be usually a stalk n slash story this deals with the grim reaper.the fx is first rate the picture and sound are top dvd quality.a true horror classic
posted by flair on 14/11/2000 19:57
8 / 10

Um I just read the person known as ad6 review of this film and I just want to know what you are on about? This is nothing like Scream, so why even try and compare the two, u tit. This film is amazing, go and buy it today, and excellent plot about cheating death. This film is a rollercoaster ride that really gets you involved in the film and makes you care about the characters. The picture is faultless, excellent commentaries by a great director and an amusing cast. Nice documentaries and a cool trailer. BUY THIS NOW
posted by spiller on 5/2/2002 11:35
10 / 10

WHAT A FANTASTIC DVD!

Well, if that doesn`t give you an idea of how good this dvd is then I dont know what will!

I got this DVD for an amazing £8.99 from one of DVD Reviewer`s sponsors, and I must say that out of all the DVD`s I have purchassed it was the best DVD I had ever purchassed (since then I`ve purchassed the new Planet of the Apes which is mind blowing!)

The transfer of the movie to DVD is got to be the best I`ve seen, and it looks great on both Widescreens and 4:3s, the picture quality is sharp, colours brilliant and flawless even in dark scenes.

The animated/video menu on this DVD is what sets this release apart from most of the DVD`s out their, you just have to see it to experience it and it just screams QUALITY!

MOVIE
I think this is probably the best of the genre that is `teen horror` mainly because I never really liked Scream myself. It has a very intelligent plot, and the idea is wonderful. The cast also bring the film to life, although it still has the usual teen stereotype, the jocks, the blonde girls, and Sean William Scott, who it appears has first refusal on any teen horror or groos out comedy. Devon Sawya and the lead actress are very good though. The deaths in the film are imaginative and it mixes shock killings with over the top deaths, such as the teacher. There is very much a sense of fear of the unknown in the film, and it works very well for it. And nice to see death isn`t portrayed as a bloke in black with a scythe. A good ending also makes a good horror film sometimes, and this one is so much better than Scream.

VIDEO
Very good, a nice clear widescreen transfer. It shows all the colours and the night scenes also look good. The last scene is very good in particular.

AUDIO
Some good surround effects at work here, and everything is nice and clear, no complaints at all.

EXTRAS
As this is an EiV DVD, the box is very unclear as to what the disc contains, what with the box being filled with review quotes. But the disc is quite full with extras. First off is the commentary, which is one of the better ones I have heard for fun details about the film. It amazed me about how much CGI was used in the airport scene, and if you listen to it, they really do point out how much symbolism is put into the film. If you can`t listen to all of it, just listen to the bit at the airport, and find out how Devon Sawya put filming bac k by falling asleep. Next up, the deleted scenes, and a very alternate ending, which compared to the one they used is awful, and a bit New Age and generally embarrassing. The accompanying feature on testing at New Line Cinema shows how the film tested pretty badly with the original ending, but shows very well how a film can be improved. To round off the disc, there is a good featurette on real life premonitions, some cast interviews the trailers and some diverting games.The menus are quite nice to. Note, don`t take the games too seriously, as when I looked at it, I lived longest if I smoked heavily, ate fatty foods drank till my eyes bled and I never exercised once.
posted by cartoonjonah on 5/6/2003 16:52