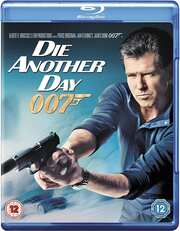 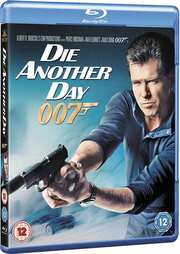 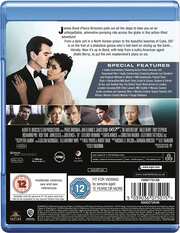 Review for Die Another Day

I can’t call this “Dire Another Day” anymore, as I have been in previous James Bond movie reviews. After all, I felt comfortable ridiculing a film that I had patently no intention of ever owning. But as I collected more and more entries in the Bond canon on Blu-ray, that collector compulsion took over, and I eventually got to the point where there was that figurative gap on my shelf, plaintively screaming at me to be filled. And so it came to pass that I reluctantly placed an order for Die Another Day. After, I can’t childishly ridicule a film for which I paid far more money than I should have, can I?

A mission to disrupt an illegal arms deal in North Korea went badly, and James Bond was captured. Contrary to his expectations, he’s released in a prisoner exchange, although he isn’t welcomed back with open arms by MI6. Yet he was betrayed by someone in the West, someone tied into that arms deal, where weapons were being exchanged for African conflict diamonds. If he wants to solve the mystery and clear his name, he’ll have to go rogue from the service. His first stop is a gene therapy clinic in Cuba, where he encounters the mysterious Jinx, as well as a survivor from that explosive confrontation in North Korea. The trail leads back to London, and Gustav Graves, a flamboyant businessman, who’s recently struck it rich with an Icelandic diamond mine.

Die Another Day gets a 2.35:1 widescreen 1080p transfer with the choice between DTS-HD MA 5.1 Surround English, DTS 5.1 Surround French and German, and DD 5.1 Surround Spanish and Portuguese, with subtitles in these languages and Danish, Dutch, Finnish, Swedish, and Norwegian. The image is clear and sharp, with decent detail, and presents the action well. The palette seems ever so slightly de-saturated, and it did seem that there was a smidge of DNR, either that or Halle Berry was shot with the Vaseline lensed camera they used to shoot female characters in the original Star Trek. But there are those indications of the film’s age, not least some terrible CGI, but also that brief fashion for variable frame rates in actions movie, speeding up a camera move to emphasise pace, suddenly throwing in a bit of slow-mo for emphasis. It feels like a naff music video when that happens. The audio is mostly fine, although there are moments where the surround sound design feels a little overcooked. The dialogue is clear, and the music also is as much of its time as the editing style. Madonna supplies the theme song, and it’s the last Bond theme I actually liked. It’s not a great song, but it’s better than the caterwauls and dirges that came with the Craig era. And at least Madonna’s song is better than her cameo in the movie.

You get one disc in a BD Amaray case, which boots to an animated menu. I got the 2013 re-release, not the 2015 one that comes with a UV code and a purple accent on the sleeve art indicating as much. The discs are the same though.

The latter is a trivia track combined with pop up videos.

007: Mission Control has the glossary bookmarks into the film, and an Exotic Locations featurette (3:09).

Finally there are 5 categories of image in the Image Database.

Okay, I’ll admit it. Die Another Day is the best Pierce Brosnan Bond movie, and might just be the best Bond movie of them all... to a point. That point is the end of the opening credits. The film kicks off with the best stunt straight off the bat, three people surfing for real on a giant wave. Bond infiltrates an arms deal in North Korea, and things go pear shaped when his cover is blown, leading to a madcap action sequence, a hovercraft chase through a minefield, the kind of action that we hadn’t really seen before, and shock, horror, Bond is captured, and during the opening credits, tortured at the hands of his captors. This is the best opening to a Bond movie...

It’s just a shame that what follows is really dire (Another Day). This was the 20th Bond movie on the 40th anniversary of the series, and they really went all out with the references in the film, with Halle Berry coming out of the ocean in an obvious reference to Ursula Andress, Q’s lair decked out with Bond gadgetry from all of the previous films, and the Maguffin recycled from Diamonds are Forever. It’s painfully forced at times, and seriously missing the subtlety that Skyfall displayed for the 50th anniversary.

Then there is the CGI, which is terrible. It’s used for most of the action after the opening sequence, including a ludicrous surfing sequence towards the end, with Pierce Brosnan obviously high and dry on a soundstage with a wave composited in behind him. Given the awesome stunts in the pre-credits sequence, this CGI surfing stunt stands out in stark contrast. They used CGI where they didn’t have to, including the battle of the gadget cars. Incidentally the invisible Aston Martin is dumber than ever.

The story and the characters offer another critical barrel of fish to shoot into. The film is written as a wink to the audience, impossible to take seriously, and when you think of the comedic campness that kicked off with the Roger Moore era, this is as bad as it gets. The dialogue is cheesy, the plot is more science fiction and fantasy than anything approaching a spy thriller, and at no point does it feel like Bond is in any kind of peril. And I hate to say this, but Halle Berry is the worst thing in the movie. She plays the role with her tongue in cheek all the way through, with no nuance or variation. It’s not a character, it’s a caricature. Back around this time, Halle Berry’s career was strangely schizophrenic; Oscar worthy with films like Monsters Ball, and Razzie worthy with films like Catwoman and Swordfish, and Die Another Day is very much in the latter category.

Die Another Day is curiously watchable, it’s very much in the so bad, it’s good category, the kind of fascination that comes with any train wreck. It is the worst of the James Bond movies, even after 20 years, and even after Quantum of Solace that so many critics trashed. The presentation on this disc is perfunctory, with a few issues with the audio and video, and just the old DVD extras whacked onto the disc, with no new retrospectives after the fact.