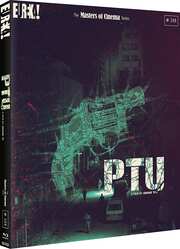 Review for PTU (Masters of Cinema)

Third Window Films has become my go to boutique label when it comes to quirky, individual and original cinema, while since the advent of HD, they’ve also become renowned for rescuing lost licences, and giving them their world-wide Blu-ray debuts, with films like the Shinya Tsukamoto back catalogue, and select Takeshi Kitano movies, as well as giving new leases of life to films released originally on DVD by companies like Artsmagic. Yet I never thought I’d see an old Third Window Films DVD title being rescued by someone else, and given a UK Blu-ray release.

That is what has happened though, as Eureka are giving PTU the Masters of Cinema treatment. Mind you, PTU was never the archetypal Third Windows title, which usually leans towards independent affairs from Japan and Korea. They’ve only released two Hong Kong movies, and while Vulgaria fits TWF’s brand, PTU, one of their first DVD releases is very atypical. Directed by Johnnie To of Running Out of Time, Fulltime Killer, and Mad Detective fame, PTU is comparatively mainstream, an action oriented crime thriller; it’s the kind of movie that is right in Eureka Films’ bailiwick. So as well as giving it a well-deserved Blu-ray release (it initially had a Hong Kong BD in 2008), they’ve sourced some more extra features for it.

Sgt. Lo is having a bad night. It’s not the confrontation with Ponytail’s gang at a restaurant, although that might have been the trigger. Having his car vandalised was bad enough, but chasing the vandal and being drawn into a trap and mugged was only the start of it. For Sgt. Lo has lost his gun, and he’s in for a whole heap of trouble if he can’t find it. To make matters worse, Ponytail winds up stabbed to death in a taxi. His gang may be prime suspects when it comes to who stole the gun, but both CID and the regular police are butting heads over the murder case, while Ponytail’s murder could also be the trigger for a gang war in the city, so just nonchalantly asking if someone stole his gun is out of the question. He does have one hope though, Sgt. Mike Ho and his maverick PTU (Police Tactical Unit) squad, another cop who knows that cops need to stick together.

PTU gets a 2.35:1 widescreen 1080p transfer on this disc, and it’s a treat. What minor issues the DVD had with age, scratches, dirt, and that missing frame are all gone with the Blu-ray, which is clear and sharp, rich with detail and the neon Hong Kong night life. Skin tones are natural, there are no signs of visible compression, and grain is natural and unobtrusive. In terms of audio, you get DTS-HD MA 5.1 Surround and PCM 2.0 Stereo Cantonese, and for the first time in the UK, a DTS-HD MA 5.1 Surround English dub. You have the choice between translated English subtitles for the Cantonese track, and HOH subtitles for the English track. With the DVD, I had issues with muddy dialogue in the surround audio, and opted for the stereo track. It was interesting to see that the Blu-ray has the same issue, with the Cantonese surround track offering such lacklustre dialogue presence that the stereo is by far the preferable option. This time around, I really appreciated the quirky music that accompanies the film, very evocative of its setting, and enhancing the oddity of the story.

The first run release of the film will come with a 24 page booklet with writing from David West, alongside stills and promotional imagery.

The Interview with Johnnie To & Simon Yam (18:14) will be familiar from the TWF DVD, but new to this release are the following interviews.

There is a new audio commentary on the film from Asian Film Expert Frank Djeng, and finally there is the theatrical trailer (2:11) for the film.

The ingredients are all there for another mass market Hong Kong crime thriller, the gangs, the police who themselves are divided into factions of varying degrees of corruptness, the violence, the tension, the crime itself, in this case a murder. But in PTU, Johnnie To takes these ingredients and delivers something really quite unexpected, something a little more poetic, darkly whimsical, and hypnotic. Sgt. Lo’s desperate search for his missing gun becomes an exploration of Hong Kong’s night-time underworld, a descent into a form of criminal unreality that in essence becomes a rite of passage for the main character. In this respect, PTU has more in common with films like After Dark and Vamp than what you might consider a traditional Hong Kong crime thriller.

If there is one thing that becomes clear early on in PTU, it’s that the police are just as much of a problem as the criminals they go up against, if not more so, when it comes to corruption and abuse of power. Our first introduction to the PTU is in the back of a van on the way to a patrol, where the younger officers are cracking wise about the report of another police officer killed in the line of duty, before Sgt. Mike tells them to straighten up and show some respect. That kind of petty venality continues when we then meet Sgt. Lo, a policeman fatuously throwing his weight around, harassing petty criminals with his badge and position, displacing a street gang from their preferred table in a restaurant at his whim. It’s merely the law of consequences that ends up with his car covered in yellow paint, and him drawn into a trap to get mugged as a result.

He loses his gun in the mugging, and assumes it’s the muggers, Ponytail’s gang who stole it. Losing a gun means career ending punishment for a policeman, so Lo has to get his gun back quickly and quietly before he gets discovered. His first action is to ask Mike’s help in finding it. The second is to get a toy gun to take its place in his holster while he searches. Mike and his PTU squad patrol the city, putting some heat on the petty criminals they find, asking after the gun, while Lo works the other angle, that of Ponytail’s gang. The problem is that by this time, Ponytail’s been stabbed, so he has to deal with his own department and CID butting jurisdiction over the murder, while sneakily trying to find out what Ponytail’s gang did with his gun. Witness intimidation, tampering with evidence, threats and violence is all normal operating procedure for this police force, and things quickly spiral out of hand.

Lo is the traditional protagonist in films like this, shorn of his dignity early on, roughly bandaged from the mugging, and driving around in a paint splattered car, he finds himself getting into increasingly outrageous territory. At one point he catches up with Ponytail’s gang again, only Ponytail’s father has caught them first, and they’re naked, shaved bald, and shoved into tiny cages so he can punish them for letting his son die. It’s the kind of cinematic image that stays with you long after the rest of the film has slipped from memory.

I really do enjoy films like this. What seems mundane and recognisable by day becomes alien and threatening by night, the cocksure protagonist is stripped of his preconceptions and winds up fighting to survive in a world that’s become twisted out of kilter. There’s a dark sense of humour to films like this, as well as an unsettling edginess, and it becomes a rite of passage for the protagonist. If there is a weakness to PTU, in the final analysis, it’s hard to see that Sgt. Lo has been changed by his travails. You do get the feeling that he’ll be back to work the next day, as fatuous and as overbearing as before. But other than that, the ride that PTU takes you on is a wild one. If you’ve got the old DVD, you simply must get this Blu-ray, as it gives the film the HD treatment it deserves, and if you’ve never seen PTU before, now’s the perfect time to give the film a try, and partake of this unexpected crime thriller.